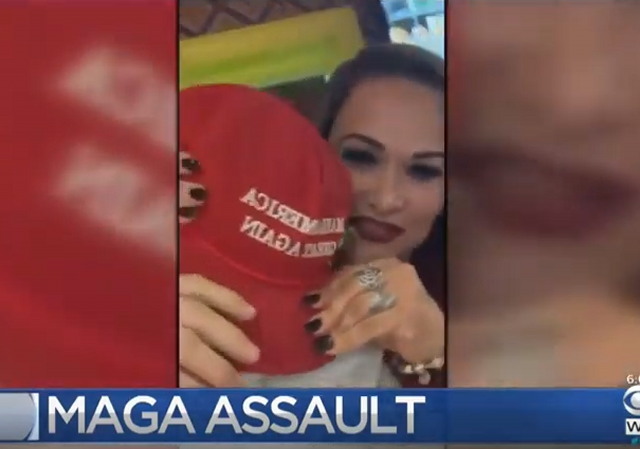 A young man was minding his own business in a restaurant in Falmouth, Massachusetts this week, when a woman approached him from behind and grabbed his ‘Make America Great Again’ hat.

The incident ended with her arrest.

A Falmouth woman has been charged with disorderly conduct after confronting a customer who was wearing a “Make America Great Again” hat at a Mexican restaurant.

Police say Rosaine Santos walked by Bryton Turner as he was eating dinner at Casa Vallarta and knocked the hat off his head. She then allegedly confronted him verbally.

He recorded some of the confrontation on his cell phone. “I’m just trying to sit here and eat a nice meal,” Turner says in the video as Santos grabbed his President Trump-inspired hat.

“It’s just a hat at the end of the day,” Turner told WBZ. “I don’t really understand why people can’t just express themselves anymore, everybody has to get mad.”

Here’s a video report which includes the footage Turner recorded on his phone:

According to the Cape Cod Times, the alleged assailant told police that Turner should not be allowed to eat in a Mexican restaurant:

Falmouth Police are charging an East Falmouth woman with allegedly attacking a man who was wearing a “Make America Great Again” hat.

According to court documents, Rosaine Santos, 41, is accused of first verbally assaulting the man, then hitting him on the head.

The MAGA hats are commonly associated with President Donald Trump.

The police report filed in Falmouth District Court indicates that when officers asked why she was bothering the man, she said he should not be allowed to eat in a Mexican restaurant.

“I asked Rosaine why she was behaving badly in the manner and she stated that Bryton was a (expletive) for supporting Trump. She also stated that he shouldn’t be allowed in a Mexican restaurant with that hat,” according the report filed by Falmouth Police Officer Newton Cardoso.

It sounds like Ms. Santos was just following orders from Maxine Waters. Maybe the congresswoman can help out with her legal fees.

I would have bought her a few shots just to piss her off even more!

“It’s just a hat at the end of the day,” Turner told WBZ. “I don’t really understand why people can’t just express themselves anymore, everybody has to get mad.”

We have Democrats at the national level openly calling for this behavior, and the Democratic National Campaign paid for it during the 2016 election. That is why we have this uncivil behavior.

We had a US Attorney General calling for blood in the streets. We have a former CIA Director sputtering vile comments on national TV.

I just may have to buy a hat.

I ran an advocacy group for about two decades, we had people of all political stripes in the group. I always kept my politics private, and I insisted on our forums that they only discuss our particular issues. I did have to periodically put some users on moderate to stop the forum from being used for never ending political arguments. I often worked closely with people whose politics I did not agree with. Being that the group were all performers, generally very opinionated, with large egos, I kept my large ego suppressed in the interest of accomplishing our goals 🙂

It appears, to me anyway, that far too many people’s emotional development ceased at about age 16. Feels like we are forced to live in a giant high school now.

I would go with 6 rather than 16 – they can’t handle being told NO with out throwing a tantrum or acting out. This is a major public mental health issue more than anything.

That is the problem with safe spaces in colleges. People need to be exposed to diverse views to grow and find their path in life.

We need to discover the right principles, internally, externally, and mutually consistent.

The hat has been elevated to “hatred” status by the Democrat Party Central Committee…. Since these useful idiots “huff” on every word from their leaders, this is expected.

It is a permanent one way street. The next step will be making such presently unlawful actions legal.

I frequently go to Canada, they are busy protecting Muslim feelings.

This sort of conduct will reach a tipping point one day and then payback will begin gradually and then suddenly. “Beware the fury of a patient man”.

This is probably wishful thinking on my part, but I’d like to see **all** crimes of this nature (i.e., crimes perpetrated on an individual because of his/her political beliefs, hats, signs, or other forms of self-expression) elevated to felony- level hate crimes.

Time and time again we see these clear violations of a person’s freedom of speech adjudicated by means of a misdemeanor slap-on-the wrist charge.

People commit these deliberate acts because they know that they’ll be fined all of $150 ( ± ) and can then go on their way. The legal consequences of their crimes in no way match the severity of those crimes. These aren’t simple assault crimes; they are something much more virulent.

If I did what she did, I would expect the guy to be an MMA fighter (or the boyfriend would be if the victim were a woman) and I would be in the ER.

The Democrats attract sociopaths like a porch light attracts moths. Sociopaths enjoy controlling other people and violence is one of their tools. The Dems encourage both the control and the violence (See Valerie’s post above). These sociopaths feel at home with the Dems. In her twisted mind, she was 100% justified in her violence. She is the Democrat voter.

To me that is assault. A SERIOUS return should be rendered, a FIERCE beat down should be suffice. They wouldn’t do it again, after some awakening manners introduced? And those folks introduced to the CROSSBAR Hotel? IMO. But in today’s ignorant society, the assaulted one gets punished for standing on their own feet.

sparred with a female black belt for a qualification years ago but other than that one time, have never hit a woman in my life(and even then was not trying to hurt her, mainly blocking her attack)–in this situation, would definitely not have sat there and put up with this woman’s nonsense–probably just restrain her until the law arrived–people like this woman pick their targets–who’s least likely to kick my ass?, etc–the young man here, like the covington lad, kept his composure and watched as the miscreant was arrested–very mature and composed–he was definitely the mature one in the altercation

Once again proving democrats are the party of intolerance, racial strife, speech and opinion codes. Completely unsurprising, well handled by the young man.

The Democratic party has descended into chaos.

The news report says the police carried the woman to the car.

I want to see that footage. lol

But yeah people need to start being punished heavily for this type of harassment and violence.

The news report says the police carried the woman to the car.

If any of the parties involved in this incident gets sued, wanna bet who it will be?

I bet that she will claim all of them groped her.

Not “everybody has to get mad”.
t’s the crazies, especially the leftist crazies.

Don’t most states make taking anything from the person off another robbery? My former state did it to stop pick pocketing making it a felony. One reason “Harry in your pocket” isn’t part of American life anymore. If your person is not sacrosanct nothing is.

It’s a shame (and reflection of the lunacy on the left today), but the most surprising fact in the story was the revelation of the existence of a Trump supporter in Massachusetts!

There are scads of them. The raw material is there—if the Republican Party was made up of anything but feeble dweebs, they’d be able to do something useful in MA.

Not only a Trump supporter, but willing to show it in public.

But really, what does it say that a slogan, Make America Great Again, is divisive- in AMERICA?

Is anyone making hats with a picture of Trump, surely that would work them up even more.

What surprised me is that the police in Socialist Massachusetts would arrest a fellow Leftist for attacking a Trump supporter.

Due to the large transient vacation population, everything east of the Cape Cod Canal averages out liberal during the summer, but is damn near reactionary during the winter.

Not everybody, just the juvenile Left.

Yep, the people wearing those MAGA hats are definitely the problem. /sarc

wonder what her immigration status is……

Not just hers, put surveillance on them, collect all the illegals that come in contact with her.

I bet her shelf life is “expired.”

The hell with arrest – let the lawsuit begin.

Better is both arrest and lawsuit.

Remember KINO JIMENEZ who, on July 4, 2018, stole a MAGA hat in San Antonio? His trial date is scheduled for March 19.

It’s a shame we are expected to abrogate our individual responses and “let law enforcement handle it” when confronted by someone who is making the argument a physical one. While remaining calm is not at all a bad thing, responding with greater physical force is a far more effective method of getting across the idea that being assaulted is not acceptable than a mere arrest with kid gloves.

Comedian Bill Burr has a great bit about how women can get away with horrible behavior like this because since men can’t fight back in this situation, they know there will be no physical repercussions.

I think I’ll go get a hit and play frisbee with some discount Obama plates.

Notice how the still picture of the video displays a girl coming up behind him and giving him a playful push on the hat. Were they hoping we would be fooled into thinking that was what the police were called for?