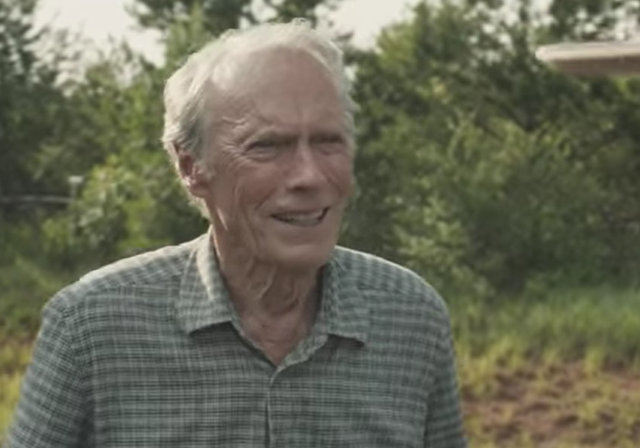 Clint Eastwood’s late period career track has been a notably mixed one. His last great film Gran Torino was released over a decade ago and since then his films have largely floundered. What hasn’t floundered is Clint Eastwood’s public image. He has had several financially successful films that have sparked massive culture war debates. American Sniper proved a massive box office but drew acrimony from prominent film critics.

While his controversial, if well-intentioned, recent films have failed to maintain a proper legacy, his latest film, The Mule, is easily his best film in years. It’s a coarsely worded yet highly entertaining thriller centered on a fascinating premise and led by Eastwood’s first acting role in six years.

Like his best late in life stories (Unforgiven and Gran Torino), the film is a story about self-reflection and redemption. In a sense, the best of his late period films are the musings of an experienced director reevaluating aspects of his career and life. It’s not a stretch to say that his portrayal of Earl Stone is a stand-in for his own public image. The story is a somewhat true retelling of the real life of Leonard Sharp, a horticulturalist who became a drug mule for the Sinaloa Drug Cartel in his late ’80s.

Critics and Their Contentious Relationship with Clint Eastwood

The reaction to the movie has been mixed. Some critics are calling it his best film in years while others had a lukewarm reaction to it, criticizing its minimalist shooting style and weak script. The more progressive film critics have gone as far as to excoriate the film for its perceived implicit racism and bigotry.

Obviously, though, the modern left is a creature of the moment. If Eastwood is blasting millennials, making politically incorrect films and mocking Barack Obama he’s certainly beyond the pale.  At this point, the only thing protecting him from being kicked out of Hollywood is his profit margin and decades of Hollywood clout that money alone can’t buy.

While The Mule has accrued much praise, many critics can’t get over what they see as an overt middle finger to them personally that they see in his work (See: Birth Movies Death, York Dispatch, Hiplatina) Other progressive critics have criticized the film for not going all the way on what could be a larger critique of capitalism and greed (See: NYT).

Eastwood being libertarian wouldn’t likely lean towards the latter idea, but it’s not hard to see him playing coy and being willing to add controversial elements to his film just to annoy liberals. Still, I would argue there is more going on with The Mule‘s portrayal of controversial subject matter. Consider that Eastwood has also directed films like Letters from Iwo Jima. Could he have made a film that respectful to Japanese culture if he were the blisteringly insensitive racist his critics claim him to be?

That’s not to say the movie is a masterpiece or nearing perfection. If there is anything necessarily wrong with it, I would criticize his shooting style for the film. Eastwood has always been a minimalist workman that shoots his films for efficiency. Unfortunately, in the age of digital filmmaking and unlike the days of film stock, cheap fast production shoots don’t look good on the big screen.

The film looks over-lit and flat for the duration. A lot of critics have lambasted the film for this, and they’re right to do so. There are also some unnecessary sexual elements that are clearly a joke playing off Eastwood’s playboy image that feel out of place with a 90-year-old protagonist. One could also reasonably criticize the film for being thematically muddled and not exploring its themes fully enough to justify its more controversial content.

The Mule, Legacy and Redemption

The film’s central character is an elderly man who casually drops racial and homophobic slurs mid-conversation without much of a second thought. As he opines in the film, he’s not a man with much of a filter. Yet, beyond this, his character is presented throughout the film as extremely flawed. He’s a career man who constantly fails to attend his family life events up until the point that he’s become totally estranged from his ex-wife and daughter.

Portraying Earl as a casual racist is part of the story. He’s not a virulent bigot, he’s a man of his time without a filter. As we see in every encounter, he uses these racial slurs, the words come off with an air of a backhanded compliment. He helps a young African American couple change their tires and calls them an uncomfortable slur. When they correct him he merely shrugs it off and keeps helping them with their car.

The movie understands that all these comments are going to hit in the theater like a brick, and it’s using them with the knowledge that the audience understands they’re wrong to say. This is all in service of the point of the film. Earl needs to be redeemed. While he never truly seeks forgiveness for this casual racism, the character always shows respect to those around him.

Thematically, the film is messy, but it’s par for the course with Eastwood’s filmography. Eastwood never plays perfect heroes. He plays selfish, broken characters who do the right thing by means of their quest for personal gain.

The Mule is a movie about the cost of redemption. It’s a reflective movie that looks back on a life of selfishness and failure and shows that it can all be redeemed at the end if you go out of your way to do it.

In the current year, making a film with such a controversial lead character is walking a delicate tightrope. It’s hard enough for white directors to make films about racism without being lambasted for having the wrong skin color. I believe that the intent with The Mule, though muddled, is well-meaning.

If Eastwood decides to retire soon or passes away, this film may very well end up being the capstone to a seventy-year career in the film industry. If that were to be the case, I think this would be an excellent film for him to go out on. It would be a poetic finale. Years of violence, blood, and justice punctuated by the image of an old man at peace in his garden.

Clint is about the only movie maker that will get me to even consider going to a movie house.

fight LA traffic to & from? check

another ~$20 for two small drinks & a small popcorn? check

last time we endured the movie theater was to see Gran Torino. the Academy Awards completely ignored it.

notamemberofanyorganizedpolicital in reply to redc1c4. | February 2, 2019 at 6:57 pm

Do you get GRIT TV?

Also GET TV has a lot of westerns sometimes.

You forgot to mention 30 or more minutes of deafening commercials before the movie starts. That alone is a good reason to not go to theaters.

I enjoyed Trouble with the Curve in spite of its low draw.

It was a good throwback to a previous era of baseball that relied less on sabermetrics.

First movie for me in 2019. He’s one of the few that I will spend my dollars on. (not a spoiler here but it needed more story).

Clint drives Hollywood crazy. His character calls a minority a bad word, but his actions prove he is not a flaming racist bigot like anybody else would be framed after saying it. Right there it breaks the Hollywood mould, because all they need to do is put a character on screen saying ‘that word’ and he’s instantly the Bad Guy who cannot do anything moral for purposes of the story.

In groups, blacks constantly use that word. Either the word is so bad it should not be used at all, or it is not really bad. They cannot, should not be allowed to have it both ways. Hypocrisy is rampant.

the man has had an amazing career, an amazing life–agree on trouble with the curve–unforgiven, of course, million dollar baby, bridges of madison county, play misty for me,several others–he has a distinct style of acting as well as directing–a true legend

A believable person with a believable persona. It would really piss me off if someone finds someway to diminish Clint Eastwood. I grew up with the guy from Rawhide era forward. His movies have been, in a sort of way, like Archie Bunker–a lot of truth with enough humor to maintain the fact of entertainment vs reality.

To the contrary, I despise Tom Cruise and avoid Tom Hanks like the plague.

Tom Banks was great in “Forrest Gump”, and pretty good in “Cast Away”. I think he’s had a few movies out since then, but I haven’t seen a one of them.

I see this is corrected below. One more problem for lack of an edit function.

Eastwood to the critics:

Get off my lawn!

Tom Hanks was great in “Forrest Gump”, and pretty good in “Cast Away”. I think he’s had a few movies out since then, but I haven’t seen a one of them.

I tend to discount the critics Rotten Tomato scores because of subservience to vile SJW philosophies. I tend to trust the audience scores much, much more.

For example, the execrable remake of Ghostbusters earned a ~71% from critics but only ~50% from the audience.

However, to be fair, the audience aggregate score for The Mule was nearly the same as the critic score. I’ll have to find the progressive scrotums who thought the movie was racist though.

This is why we call them NPCs. Incapable of any response outside the limitations of their programming.

Who pays any attention to what the critics think of a movie, book or any other item of “art”?

I pay attention, if they pan something it likely has merit.

“Who pays any attention to what the critics think of a movie, book or any other item of ‘art’?”

“Artists”, and other critics.

I saw The Mule in a big theater. Didn’t have much company, but I’m retired and I saw it in the middle of the day. It is not Eastwood’s best work, but like the saying goes, “It ain’t love but it ain’t bad”.

The basic plot line follows the actions of a real person. To the extent that people say the script is weak, well what we see is largely what happened.

And a lot of the thinking in the movie is the thinking of a man who has lived a long life (as Eastwood has) and is still trying to figure out what’s important–and what’s not. But that is more true to real life than the shoot em up bang em up crapola that’s directed to15 year old boys—which is most movies these days. Go watch The Mule.

“It is not Eastwood’s best work, but…”

Keep in mind that only a mediocre person is always at his best.

I went to the movies over Christmas break with my kids and saw Bumblebee, a Transformer prequel. The seats were excellent! Recliners with lots of space. We purposefully came in just as the movie started; you pick your seats prior to the movie so there was no need to come in early for the previews. It is still expensive, and I would rather watch movies at home, but I wouldn’t mind seeing The Mule.

Million Dollar baby is almost unwatchable. It held my interest pretty well the first time I saw it. The second time I noticed the screen is blurry through the whole movie.
Must be the bad CGI.

On second thought, it might be a problem with my video card. I noticed the same thing happen when I was typing that in.