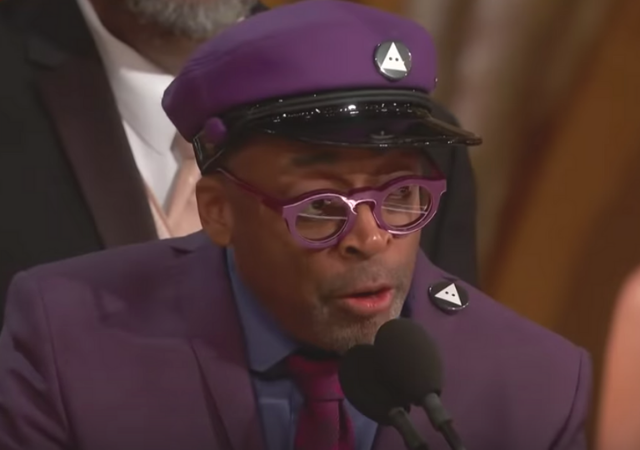 Spike Lee is infamous for having been snubbed for Oscars five times during his career as a director. At Sunday’s awards ceremony, he won Best Adapted Screenplay for his critically praised and controversial dark comedy Blackkklansman.

Lee used his brief platform accepting his Oscar for Best Screenwriting to pontificate about contemporary politics and racial oppression.

“Before the world tonight, I give praise to our ancestors who have built this country into what it is today along with the genocide of its native people… We all connect with our ancestors. We will have love and wisdom regained, we will regain our humanity. It will be a powerful moment… Let’s all mobilize, Let’s all be on the right side of history. Make the moral choice between love versus hate. Let’s do the right thing! You know I had to get that in there.”

While he didn’t explicitly name President Donald Trump in the speech, the implicit call for Trump to lose the 2020 election is obvious. Spike Lee dedicated the ending of Blackkklansman to directly connecting the KKK, David Duke, the Charlesville riots and Donald Trump as modern proponents of white supremacy.

Blackkklansman remains one of the most controversial films of 2018. While it’s Spike Lee’s strongest film in years, it’s functionally a prank visited upon its viewers that suckers it’s the white audience in with the notion that the KKK hasn’t been relevant since the 1970s only to pull the rug out on you and claim that America hasn’t improved racially in decades. This message has enthralled progressive critics but conservatives have largely harbored negative feelings towards the film for its outlandish accusations and highly implicative ending.

For fans of Green Book, however, the Oscars was a good night.

I watched the Blackkklansman movie today. There were aspects of it I liked. But in general it displayed all of Spike Lee’s worst instincts as a filmmaker. The anti-Trump stuff was ham fisted agitprop.

#GreenBook was splendid. The mediocre #BlackkKlansman and "Green Book," explored "race relations," in '62 & '72, respectively. "Green" ends on a hopeful note about a lasting black-white friendship. "Klansman" ends with propaganda on how Trump is whipping up racism now.#Oscars

Pardon my ignorance, but what are the buttons on Spike’s hat and left shoulder that look like Klan hoods?

notamemberofanyorganizedpolicital in reply to Pillage Idiot. | February 25, 2019 at 5:03 pm

JusticeDelivered in reply to notamemberofanyorganizedpolicital. | February 26, 2019 at 9:56 pm

That is the New Black Pansies.

notamemberofanyorganizedpolicital in reply to Neo. | February 25, 2019 at 5:07 pm

Did the Anthony Oscar Wiener give Spike “Lee”
a life-time Loser Participation Trophy?

Yes, yes they did.

“We all connect with our ancestors.”

He should acknowledge that his ancestor fellows sold his ancestors into slavery. And, native Americans fought each other, usually killing other tribes men, sometimes taking children and women as slaves, sometime eventually absorbing those captured, and sometimes using captured women to service their braves while treating them so poorly that they died.

To be clear, native Americans were not saints, and tribes character varied greatly.

notamemberofanyorganizedpolicital in reply to JusticeDelivered. | February 25, 2019 at 5:09 pm

He must be right up there with Lizzie Borden Warren with his delusions….

High Cheek Bones you got there Mr. Lee!

He looks like a gay elevator attendant. Who dressed this guy?

My first thought was bus driver, but elevator operator is good too. He looks like a cartoon, any which way.

He suffers from an overabundance of ‘scrawny’ both in size and character. Even the double-sized ego and triple serving of hatred cannot begin to overcome those deficiencies

That is often a black thing. Clothing and cars are highly valued. Yes, I do have black friends. Personally, I pick clothing solely for utility. I have never bought a new car.

He probably thinks that his outfit makes him look like Elton John.

notamemberofanyorganizedpolicital in reply to NotKennedy. | February 26, 2019 at 1:48 pm

Make the moral choice between love versus hate.

Ah yes, Grasshopper, the self-awareness is a bit thin with this one.

It’s plenty clear what Lee’s choice will always be. Susan Sontag’s death catapulted Lee into first place as America’s premier knee-jerk hater. I think he’s worse than Farrakhan, although there’s room for debate about that.

My black ex woulda booted his skinny butt to Boise if he had pulled that on us. Not sure I could’ve restrained her since I was only twice her size… 😉

In my early twenties we had a young Jamaican foreign exchange elementary school teacher. She came from a decent family and background, was very attractive, pleasant personality and had absolutely nothing in common with our typical inner city blacks. She was here for a year and we dated.

But liking someone is only one aspect of why were marry, and when you marry someone, even if they are reasonably bright, you are gambling with the group’s average IQ, and Jamaica’s average IQ is 71.

We should do well by out children, and that starts with our selection of a mate.

I did say she was an ex. High IQ (which she has) couldn’t overcome her ‘spoiled little girl’ upbringing…

Hollywood the land of fantasy and really bad stylists. Spike thought he was owed this because he hated Trump more ? To be fair I saw only 2 movies on the list this year, Free Solo and Bohemian Rhapsody. I’m guessing I’m not the target audience.

I liked his Micheal Jordan commercials…

Those who have little interest in him or his works likely don’t much care much about what he says or does.

You don’t have to give a rat’s patoot about his “work” to know a slavering racist when you smell one.

His “daggers at interracial couples” comment means I am very less inclined to view his work. Someone I trust would have to tell me they loved a movie of his before I went to see this racist’s movies

Ah Spike–as Harry Reid might say, Al Sharpton is the Babe Ruth of the League of Race Baiters–and you by contrast would be riding the pine–forever.

“I had the distinct displeasure of running in the same circle as he [Spike Lee] at the NYU Film School in the late 70s/early 80s and far from mellowing with age, his madness is even more pronounced and strident than ever before.”
http://ace.mu.nu/archives/379953.php

The O’s have been criticized for years because of the lack of awards going to black actors/directors/producers or anybody not white. This year they bent over backwards to rectify that disparity. Spikes award was a made up, meaningless token of an award. If you listened to NPR this morning, they had a clip of a giddy Britt accepting an award and all the other awards covered were given to blacks.

This qualifies as Oscar reparations.

Did he win for looking most like circus boy?

Spike lee? What’s that, some brand of basketball shoes?

Nothing is more vapid and uninteresting than thousands of useless libtards handing out awards to each other.

There could be a reason why racism, bigotry, stereotype, prejudice and cultural abdication persist.

he looks and sounds like a uniformed toilet attendant

Spike Lee lost twice to movies about black and white people driving in chauffeured cars. So, he dressed like a gay chauffeur, hoping to change his luck. Funny guy.

One correction of Lee’s acceptance speech. Native Americans were not genocided. They were conquered by a bunch of illegal aliens. We should learn from their experience. Then they were treated better than any other conquered people. They never took prisoners, save for the blond girls they kept as sex slaves. They were given sovereign territory by their Christian conquerors.

Were he a bit less hateful and creepy, he might, one day, achieve mediocrity.

As I have always though, “oh, look a BLACK fisted MORON”. Normal for anyone in holliss wood.

Watching this movie, I could not help thinking of Mel Brooks’ comment on how “Blazing Saddles” could not be made today.

This movie struck me as Spike Lee’s response to Brooks: he used the movie to shoe-horn in every possible stereotypical racist cracker ignorance meme that he could. But Mel Brooks painted in off-color pastels, while Spike Lee painted with feces.

He’s dressed like a bus driver – which is where he should be working.

That ugly little spoiled brat runt was obviously drunk when he stood there and stumbled through his rant. He won’t be satisfied until every nomination goes to a POC and every winner is a POC.