“The network, according to the Babylon Bee, was reportedly impressed with Smollett’s ability to fabricate a story out of thin air” 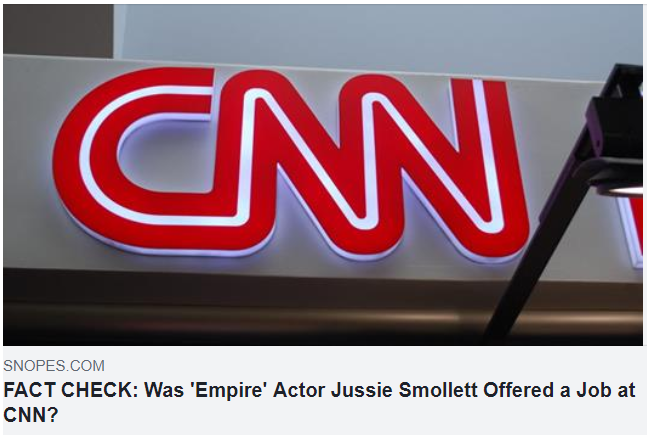 I’m so old, I remember when Snopes was a reliable fact-checker. I suppose their latest is not technically unreliable, even it if it is hilariously unnecessary.

The Babylon Bee is a well-known satire site and yet, Snopes fact-checked one of their recent posts. They may as well fact check The Onion.

In any case, The Babylon Bee poked fun at both CNN and Jussie Smollett (the actor recently embroiled in an alleged hate crime hoax) in a satirical piece suggesting CNN offered Smollett a job.

Though Snopes acknowledged the Bee is a satire site, they fact-checked anyway:

On 18 February 2019, the Babylon Bee website added their own fictional twist to this story when they published an article reporting that Smollett had been offered a job at the CNN.

The network, according to the Babylon Bee, was reportedly impressed with Smollett’s ability to fabricate a story out of thin air:

While Empire actor Jussie Smollett has been having a tough week so far, there appears to be a silver lining: cable news channel CNN has offered Smollett a job as an investigative reporter and on-air anchor after witnessing his skills at fabricating a story entirely out of thin air.

CNN producers were reportedly impressed throughout the ongoing saga of Smollett’s apparent hoax attack on himself. They realized early on the facts didn’t add up but were fascinated with how well the actor kept the narrative going. An HR rep quickly reached out to Smollett to see if he’d be interested in taking on a position at the news organization after news broke that the entire thing was probably fabricated.

This was not a genuine news story, although some readers mistook it for such. The Babylon Bee is a satirical website whose disclaimer notes that “The Babylon Bee is Your Trusted Source For Christian News Satire.”

And The Babylon Bee’s response was exactly as it should be:

The sad part is that it is very believable that CNN would offer Smollett a job.

Remember: their viewers live in an alternate reality. Mostly in LA LA Land.

What the Bee meant to say was that Jussie Smolletts died and was buried in a Sacred Indian burial ground. And, he came back as a CNN Reporter.

Snopes as a fact checker?

We busted them a long time ago.

Do You Trust Snopes? You Won’t After Reading This.
https://foodbabe.com/do-you-trust-snopes-you-wont-after-reading-how-they-work-with-monsanto-operatives/

Was Snopes.com ‘BUSTED’ for Our CEO’s Ties to George Soros:
https://www.snopes.com/fact-check/was-snopes-busted-ties-to-soros/

They do tend to use a predictable method of operation, focusing on one aspect of a statement they know to be false thereby arriving at the “fact” they want to present to the reader. This creates confusion, which is the goal for this “organization” the goal is disinformation.

Look what you just cited as “evidence” — a kooky anti-GMO activist (there is no other kind), angry that on this topic, where there really are no ambiguities to spin, Snopes is solidly on the side of science and reason, and debunks the garbage. Which by the way explodes your position that it is sold to the left, since it is the irrational anti-science green left that is frightened by GMO.

Yes, on political questions Snopes won’t lie but it will spin; it will present issues from the point of view of a leftist observer, because that’s whom the Mikkelsons hired when the work became too much for them to do alone. How it phrases a question will control how the answer is phrased, and that will always be exploited to make the left look better and the right look worse than they are. It didn’t use to be like that when it was just the two of them, because as Canadians they really weren’t that interested in US politics, and because they were trying to be as fair as they could be.

But on questions to which there really is a truth and a falsehood they follow the evidence wherever it leads. So on GMO they’re as gentle as they can be to the anti-GMO left, depicting them as well-meaning idiots rather than the enemies of humanity that they really are, but they don’t spin the truth.

And on this story they present it exactly the way they do any piece from a fake news site (in the original sense) that escapes and is circulated as if it were true. A brief browse through the site will yield dozens of similar examples with absolutely no bias between left and right.

This is funny. Thanks, Kemberlee. How’s your little girl doing?

I just had the same thought yesterday, after reading Kemberlee’s last post. The way time flies, Clara surely must be in school by now.

To be fair, Snopes has done “fact checks” on The Onion stuff in the past as well.

I’m so old, I remember when Snopes was a reliable fact-checker.

Sorry, that was one of those “Golden Ages” which never really existed.

I’m so old that I remember when people actually knew when something was satire. We had to read Jonathan Swift in school.

This. Along with Gullivers Travels.

It certainly did. When it was just the Mikkelsons, and they weren’t fighting, it was highly reliable. It still is mostly reliable, but it’s gone downhill since they hired writers with leftist views to produce more content. They still don’t lie, but they’re unsubtle with their spin, which the Mikkelsons never were.

So… because the Babylon Bee has been fact-checked and found to be a purveyor of misleading news… that means it goes on blocklists maintained by Newsguard and similar systems, yes? Therefore the satire site is silenced to numerous people on the Internet, victim to having been taken too seriously.

Lovely world out there.

Um, no. It gets treated exactly the same as all other actual fake news sites (i.e. in the original sense of that term, before Trump redefined it).

An anonymous source has informed me that if her gig as a Congresswoman doesn’t pan out for some reason, Alexandria Ocasio-Cortez will be offered the prestigious “Paul Krugman Alien-Invasion Economic-Stimulus” scholarship to study Economics & Finance at Stanford.

So, Snopes has progressed to knocking down straw-clowns that were created and persist in their heads. Twilighters, leave them babies… kids alone.

This was not a genuine news story, although some readers mistook it for such.

That’s just some leftists in over their heads again.

They should leave humor to those who understand it.

Just wait until they read what @sean_spicier has to say about it on Twitter!

That’s even funnier than the Babylon Bee or the Onion!

Unbelievable. Snopes has achieve perfect doofusdom. Either that or it has come out into the sunlight as the bigoted, dishonest, agenda driven political sheet that we have long known it to be.

The Babylon Bee is a well-known satire site and yet, Snopes fact-checked one of their recent posts. They may as well fact check The Onion.

Don’t be stupid. Snopes did not fact-check the Bee, it fact-checked a story that people were presenting as genuine, and pointed out that it came from the Bee. It does exactly the same thing whenever a story from the Onion or any of its imitators is circulated as genuine news.

All that should have been necessary would have been to point out that the Bee is a well known satire site, no further “fact checking” or commentary would be necessary. Anyone who failed to understand that wouldn’t understand anything else either.

Snopes, LOL, what most people find amusing is the fact that Snopes does not accurately perform fact check’s this is concerning because they believe that the methodology they employ to “arrive” at their “desired” opinion… They focus on one aspect of a “predefined” statement which at first may appear to be a cleverly disguised attempt to disambiguate the truth from a set of carefully contrived statements which mislead the reader and bring great shame upon those that attempt to support such evil efforts.

Snopes is owned by a George Soros group ,,, full of BS, Lies and libTurd Hate. They really believe that people are weak minded and will believe everything they are told. That is true for liberals but anyone with functioning Brain Matter will see them for what they are !!

Snopes is owned by a George Soros group

That is an outright f—ing lie. Shame on you.