Is the left is revving up for more statue-targeting as part of Election 2020 activities? 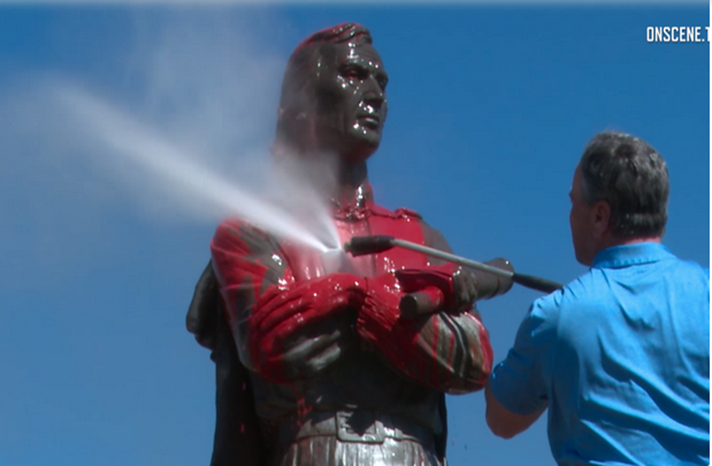 A statue honoring Christopher Columbus was vandalized this weekend in the San Diego area’s Chula Vista.

According to police, officers were called to Discovery Park around noon after neighbors reported that someone poured red paint over the statue.

When officers arrived they also found the words “genocide” and “FU” spray painted onto the figure. A brass plaque that used to be attached to the statue was also missing.

Police say they believe the vandalism happened overnight Saturday. Crews from the city responded quickly to clean the statue.

As of Sunday afternoon, police say they don’t have a suspect description, but added that the investigation is ongoing.

Some of the residents in the area are shaken.

Some called the act violent, but others said they want the statue removed altogether because of what the explorer represents.

“They don’t have to come out and vandalize a statue,” said Valeria Corona, Chula Vista Resident.

…City crews first used a pressure washer and then they scrubbed the rest of of the paint off using a brush Sunday.

The evidence of what happened is still there. You can still see red paint splattered on the ground and the tint of red lingering on the statue.

“It’s pretty weird to think someone came here this close to my house to vandalize something,” said Corona.

“BlacKkKlansman” director Spike Lee labeled famed explorer Christopher Columbus a “terrorist” during an interview Wednesday while also urging the United States to be truthful about the country’s past.

…“I think that a lot of people need to know this. Because this is part of American history, which is not all good,” Lee said. “You know, I think that when I was in public school in Brooklyn, New York, I was not told George Washington owned slaves. I was told that he chopped down the cherry tree and wouldn’t tell a lie. In 1492, this guy, this terrorist sailed the ocean blue.

I spent a wonderful weekend with my son and his schools Academic Team competing in a “History Bee.” They team did very well, and the questions were fact-based, instead of focused on social justice. This gives me good hope that acts of physical and psychological vandalism of our nation’s past will not become common place.

However, maybe the left is revving up for more statue-targeting as part of Election 2020 activities? Given the fact that presidential hopeful and press favorite Kamala Harris wants to replace Columbus Day to “Indigenous Peoples Day“, perhaps this round of destruction will focus on something other than the American Civil War.

I would like to note that destruction of memorials are not confined to this country. A Christian crusader’s body was recently decapitated in Ireland.

An 800-year-old ‘Crusader’ from a crypt in St Michan’s Church in Dublin has been decapitated by vandals.

Archdeacon David Pierpoint spoke to Philip Boucher-Hayes on RTÉ’s Liveline and said the Crusader’s head has been “severed from his body and taken away.”

The discovery was made by the tour guide at 1pm when the guide was preparing to open the church for visitors.

What else do they have except lies and violence?

Geez, you’d think they were fascists or something.

Columbus was a man who worked hard and was successful! The democrat socialists cannot have that as their voter base is lazy and fail at whatever they do! In their minds contributing to the betterment of society is evil!

“Our history is what we say it is!”

Columbus was Pro-Choice, diverse, and a social justice-monger?

Sometimes I wonder if treating these Progs the way their ancestors treated other people would be worth it.

notamemberofanyorganizedpolicital in reply to alaskabob. | February 26, 2019 at 2:33 pm

RE: “treating these Progs the way their ancestors treated other people”

In Venezuela, Some Low-Level Soldiers Are Deserting Following Being Ordered to Block Emergency Food Deliveries to Civilians – Ace of Spades

How about we declare the 1st of each moth the F the Indignant Peoples day?

As I have said before, some people are creators, others only complain and never create anything.

It is way past the time that we should have started telling all the ingrates that we don’t care about their likes and dislikes.

Historical artifacts should all be left alone, so that each person can see them and interpret them as they want, but they better not mess with them.

All historical statues should have at least 3 cameras on them and transmit to a secure location.

When perps are caught they should be put on display for a week hanging upside down. Rotten fruit should be on hand for that time 🙂

How is this not a hate crime. The Perps clearly don’t like Columbus.