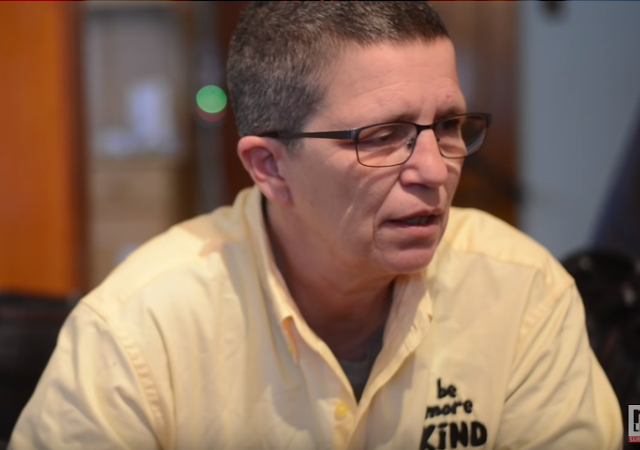 In Jackson, MI, transgender man Niki Joly became a gay hero in 2016 and 2017 after he managed to put on a gay festival and have ordinances dropped that discriminated against gay people. The local paper named him Citizen of the Year.

But that was not enough attention for Joly because police finally arrested him for arson for burning his own house down in 2017. That fire killed his three cats and two dogs.

The police long believed Joly set fire to the house, but needed more evidence. From The Detroit News:

Despite the attention on Tulloch, police had another suspect in mind. They quickly zeroed in on Joly, according to the police report.

Joly told them that, on the morning of the fire, he bought $10 of gas at a Marathon station so he could cut his grass. He began to mow, but it got too hot so he stopped with the backyard half done.

He went to work at the church and got a call from Moore at 1:02 p.m., said the report. Moore had forgotten to pack her lunch so asked Joly to bring it to her at work. The couple share one car.

Joly returned home, which was two miles away, went inside for a minute or two, and left, he told police.

The fire was reported by neighbors at 1:16 p.m.

The sequence of events would have made it difficult for anyone but Joly to set the fire, Grove said in the police report.

“The timeline shows a window of less than five minutes for another person to enter the residence, splash gasoline around, ignite the fire and then leave without being scene,” wrote Grove.

The police also asked people around Joly about the fire:

Two people who worked with Joly at St. Johns United Church of Christ, where the Jackson Pride Center was located, said he had been frustrated the controversy over gay rights had died down with the passage of the nondiscrimination law, according to the report.

The church officials, Barbara Shelton and Bobby James, when asked by police about a possible motive for the fire, said Joly was disappointed the Jackson Pride Parade and Festival, held five days before the blaze, hadn’t received more attention or protests.

Contacted by a reporter, James declined to comment. But Shelton quibbled with the way police characterized her remarks, saying she had no idea if Joly was frustrated by the lack of controversy.

“Not sure I said that,” she wrote in an email. “I have no idea about anything, never heard Nikki comment in any fashion about anything like that.”

However, police detective Aaron Grove wrote in his report that “Shelton and james both described Nikki as very deceptive and stated that when it comes to Nikki there are ‘layers of manipulation.'”

The report also found gas on Joly’s clothes he wore on that day. The FBI and police interviewed Joly two weeks later and he didn’t admit or deny setting the fire.

Joly’s attorney said he did not own the house, which means no insurance money. He also thinks the motive lacks evidence due to the honors bestowed upon Joly by the city. That answer is quite easy. Some people need as much attention as possible. Once their stardom begins to die they need something else to happen to propel them back into the limelight.

Joly is innocent until proven guilty just like Jussie Smollett, who allegedly staged his own fake hate crime in order to raise his celebrity status and pay on the show Empire. Smollett claimed two whit men attacked him in Chicago, placed a noose around his neck, and yelled, “This is MAGA country!”

Unfortunately, these alleged hoaxes will keep people from taking a person’s word when it comes to hate crimes.

I want to see PETA’s response. If they were so upset with Google for honoring Steve Irwin, PETA should lead the charge against this person for killing its 5 pets. A modern day hate-crime lynching, for sure.

I have no use for PETA, in that where necessary I think that human life is more important than animal, but that does not mean animals should unnecessarily suffer or that they should be sacrificed for nothing.

He didn’t own the house? Minimum 10 years in jail.

Can we now refer to this as an it?

Hold on. A transgender man? You mean a woman, right? Why is this article using male pronouns?

The correct term is “a cross-dresser.”

I used “it” in my post. I’m so over all this politically correct pronoun garbage.

notamemberofanyorganizedpolicital in reply to AJR. | February 26, 2019 at 1:45 pm

Something doesn’t make sense here….. must be the Democrats.

Author, the proper grammatical use of pronouns ‘he’ and ‘she’, it has to do with the subject’s biological sex, and has nothing to do with his or her’s ‘self-identity’. That would all be between someone and her psychiatrist and the rest of us don’t much care.

Not buying the transgender line. I looked at photos. Nikki is a short, overweight woman with a very large bosom and a male haircut.

If the charge is true, she is a monster. Two German Shepherds and three cats died frightened, painful deaths. What kind of person does that?

Reminds me of Norm MacDonald’s classic SNL line about Rikki Lake and peta. “That Rikki Lake, she’s some animal lover. She has two dogs, 3 cats, and a big ass that follows her everywhere.” The old SNL had some glorious moments.

What a sleaze bag, perhaps some part of his anatomy should be burned so that he is reminded what he did everytime he unzips? A transBurned

This is an example of the luck of the draw, weather a child or a pet, the short straw as to what family they end up with.

I missed that it is a she.

notamemberofanyorganizedpolicital in reply to JusticeDelivered. | February 26, 2019 at 1:46 pm

Was a she, right?

More proof that liberalism is a mental disorder.

notamemberofanyorganizedpolicital in reply to Ghost Rider. | February 26, 2019 at 1:46 pm

Is this why they call them flamers?

I don’t see a lot of evidence presented.

Testimony that it’s a duplicitous weirdo isn’t evidence that it set a fire.

Inability to find any other candidates for an arson charge is perhaps evidence, but hardly a slam dunk.

The payoff is very slight—a bizarre hope that a house fire will somehow trigger the all-important “controversy over gay rights”—huh? Wtf? “Does Not Compute”. But the cost for that is high; nobody who actually keeps several pets—even goldfish or tarantulas—would light them up casually and entirely unnecessarily, unless they’re clinically gonzobeans, and if they are, they can’t be tried.

So, color me skeptical.

See this story from the Detroit News: https://www.detroitnews.com/story/news/local/michigan/2019/02/25/gay-rights-leader-accused-burning-down-home/2816523002?fbclid=IwAR2MCzuQ3ZfBa5RHCN1UQfOxUIfEedxneM2gWM5eDR65Ggdg_XYTZ4Mx2VA

The details of the police’s case against Joly are toward the end of the piece.

It looks like our resident TDS-LPS sufferer is down voting all who routinely TRUMP him.

arrested him for arson for burning his own house down in 2017. That fire killed his three cats and two dogs.

If it isn’t its house (and it isn’t, at least according to its attorney, who of course might be a lying dirtbag), then maybe it wasn’t its pets, either. Which would make the arson charge a bit less unlikely.

I gather they were renting, so the offense is against the landlord.

One would think they’d found additional evidence to make this charge of arson stick, but I agree the article doesn’t make it too clear.

Arson, burning without a permit,cruelty to animals, and insurance fraud for starting charges.

“Leave without being scene?” Really? Spellcheck is a terrible editor!

This weirdo animal abuser will be a hit in prison. And given the felonies she/he/it committed, prison is where she/he/it is going.

Can someone confirm the female to male surgical procedure is called an “addadicktome?”

“adadictomy” I first heard it when they were doing a penile implant in the adjacent room and I inquired what the case was. One asks questions when a neurosurgery room is operating on the groin area. Upon hearing that, I responded with “oh.” My “not getting it” caused the team in our room to stop until the laughter subsided. I sometimes wonder what they did for entertainment before I arrived.