“I’m ashamed to say that. And I did it for maybe a week, hoping some black b*****d would come out of a pub and have a go at me about something, y’know?” 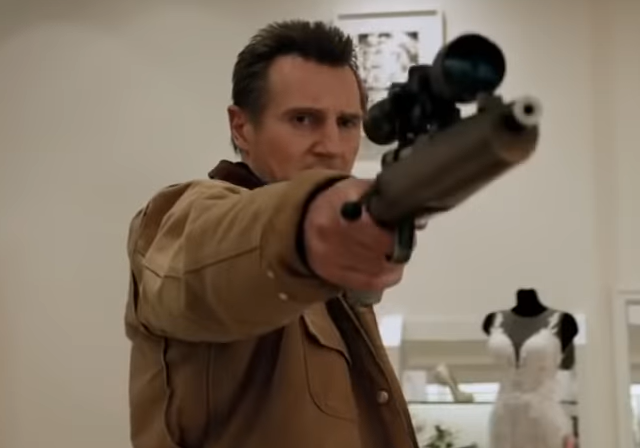 In an obscure night
Fevered with love’s anxiety
(O hapless, happy plight!)
I went, none seeing me
Forth from my house, where all things quiet be

These are the words of St. John of the Cross’s poem titled “The Dark Night.” The poem describes the unknowability of God and the necessity to take a step into faith. In contemporary storytelling the term has taken on the meaning of being the darkest descent a character must take in their journey before being fully redeemed.

It’s the place where a person’s true character is tested against the full harshness of reality in its horrors. We see shades of this as Luke Skywalker duels his father and when Frodo crosses the barren fields of Mordor. It’s the place where truth is revealed in full, and we’re laid bare for who we are.

In a recent audio interview with The Independent that was released on February 4th to promote his upcoming film Cold Pursuit, Liam Neeson openly discussed a horrifying incident in his past as a young man in which he conceived to commit a racist murder as retribution for a friend’s rape.

Full Transcript from The Sun:

“I’ll tell you a story, this is true.

“I’m not going to use any names, but I was away, and I came back. And she told me she had been raped.

“But she handled the situation of the rape in the most extraordinary way.

“But my immediate reaction was…

“What colour were they? She said it was a black person.

“I’ve gone up and down areas with a cosh hoping I’d be approached by somebody.

“I’m ashamed to say that. And I did it for maybe a week, hoping some black b*****d would come out of a pub and have a go at me about something, y’know?

“So that I could… kill him.

“It took me a week, maybe a week and a half, to go through that.

“It’s awful. But I did learn a lesson from it.

“When I eventually thought, ‘What the f**k are you doing?’ Y’know?

“And I come from a society – I grew up in Northern Ireland in the Troubles – and that, y’know, I, I knew a couple of guys that died on hunger strike and I had acquaintances who were very caught up in the Troubles, and I understand that need for revenge.”

The story is altogether horrifying and deeply disturbing, but his way of discussing it is entirely confessional. It calls to mind the story of Charles Bronson’s character Paul Kersey in Death Wish wherein a begrieved widower seeks revenge on the streets of New York City as vengeance for his wife’s rape and murder. In real life, however, and with the added dimension of racial tribalism, the story churns the stomach. It is however important to look at the story in its totality. This confession ends with an appeal to avoid violence and revenge.

In the end, Neeson ultimately came back to his senses and didn’t let himself go through with killing an innocent man. With that ending in mind, the story as a whole is harrowing. It’s the story of a real life descent into the dark night of the soul ending with Neeson ultimately making the right choice. Neeson later clarified in a Good Morning America appearance that he isn’t racist and that the events happened forty years ago and don’t reflect his current beliefs.

Naturally, however, this didn’t go over well. Immediately calls started going out to have Neeson’s life destroyed. The premiere for his movie was canceled, people started calling for him to be digitally removed from Men in Black: International, and social media as a whole erupted with condemnations of racism against Neeson.

Neeson was probably foolish for sharing such personal information with a journalist, but the incident is calling some important issues into question. Sam Harris brought up on his appearance on the Joe Rogan Experience that the incident should call into question how our society as a whole grapples with public apologies and redemption.

Neeson is being raked over the coals because he underwent a moment of moral failing and then dared to talk about it publicly. This is the insanity of the current moment. The point of the descent into the dark night is that we come out on the other end better than we entered it.

But there is no room for redemption among the left.  People must be punished merely for having bad thoughts . . . whether or not they acted on them and even when they’ve grown past them over intervening decades. This system creates a perverse incentive to be dishonest about one’s sins.

It’s the opposite of the faith of St. John’s poem where trust in God can redeem us from our darkest sins.

Once in the dark of night,
Inflamed with love and yearning, I arose
(O coming of delight!)
And went, as no one knows,
When all my house lay long in deep repose

All in the dark went right,
Down secret steps, disguised in other clothes,
(O coming of delight!)
In dark when no one knows,
When all my house lay long in deep repose.

And in the luck of night
In secret places where no other spied
I went without my sight
Without a light to guide
Except the heart that lit me from inside.

It guided me and shone
Surer than noonday sunlight over me,
And led me to the one
Whom only I could see
Deep in a place where only we could be.

And on my flowering breast
Which I had kept for him and him alone
He slept as I caressed
And loved him for my own,
Breathing an air from redolent cedars blown.

And from the castle wall
The wind came down to winnow through his hair
Bidding his fingers fall,
Searing my throat with air
And all my senses were suspended there.

I stayed there to forget.
There on my lover, face to face, I lay.
All ended, and I let
My cares all fall away
Forgotten in the lilies on that day.

I don’t think something like this makes anyone a racist.

It does reveal someone’s thinking, doesn’t it? Whether this hollywood ham is a “racist” is not the issue. His broad image of what a black person is (street scum) is.

Ignoramus actor don cheatle wears a CCCP shirt on Saturday Night Jive. This guy is so stupid. Which is why he is so arrogant.

It’s an NBC propaganda program. It’ll be on for as long as NBC owner GE isn’t called out for it’s disgusting support for its anti-Americanism.

Leftists are animals. Rationality is absent.

My first thought was that he’s a fool for admitting this. My second concerns the kind of world we are building where people can’t admit shortcomings and explain how they’ve learned something. We’ve ceded too much ground to the mob.

In this case, it’s a very good lesson for these hollywood idiots enabling facists out of fashion.

If you’re an imperfect human … these days the best plan of action is to keep your mouth shut.

neeson is being condemned by the very crowd he is part and parcel of.

Liam, welcome to the #walkaway movement. That is, if he has the brains to do so.

I can’t put aside my skepticism on this. Neeson doesn’t strike me as particularly stupid or naive. Maybe he is tired of being offered action films and rather than having to start turning them down, he sabotages his career instead so that his manager doesn’t keep hounding him to take another one. His celebrity status will afford him the benefit of the doubt on not being a racist, but he has to know that will not assuage the PC mob that will demand he never work again. I just don’t see this as a random act of candor.

I think it’s a calculated attempt at getting people to talk about him, and his latest movie.

Man, you’re giving this silly actor a lot of credit.

Talented actor? Sure. Stephen Curry is a talented basketball playwer, but he hinks we faked the moon landing in 1969. Barack Obama is (was) a decent telepromter reader, but we know what a dumbass he actually is.

He doesnt need the money to get people to his movies

He’s rich beyond most of our dreams

he;s just another Hollyweird anti-gun clown that makes movies with guns in them.

which is why i never watch anything he’s in, and IDGAD what he has to say about anything.

Northern Ireland? Sounds like a guy who’s managed to overcome the conditioning of his noxious cultural milieu.

That’s what “maturity” is—outgrowing your childhood. For some, that takes longer than for others. Many—following the modern fashion—never do it at all. Others, like Neeson, manage to do it before they make a major mistake.

As for why he’d tell this to the press, well, most actors like to talk. A lot of writers don’t, but actors tend to be chatterboxes.

I think Mr. Neeson has watched too many movies starring himself as a badass.

Like all leftists, he’s a liar. And a gun grabbing commie.

The Neeson remake of this foreign film is very regrettable. Its’ a really good movie, that didn’t need to be redone for a US audience by a anti-gun actor… and now a clearly very tone-deaf and small man/actor. The original is avail on Amazon streaming… maybe even on Netflix. ” In Order of Disappearance “. I saw it over a year ago and it’s good.

I put Neeson on my “Never pay to see” list after he came out against gun ownership. The hypocrite makes his living killing people on the big screen and then blasts the law abiding citizens who own guns and do not kill people real or imagined! Hollywood POS!

He’s on my unofficial but quite extensive “No buy” list, too, for the same reason, inspectorrudy! 🙂

The left has won the linguistic war if the right is now preoccupied about whether they have had impure thoughts containing the seeds of “racial tribalism”. Trampling the I may have been racist crucifix is now obligatory. Have a look at WorldstarHipHop, they wear their racism on their sleeve, could care less, and are never held accountable.