“I can give you the script now. I can tell you who the players are.” 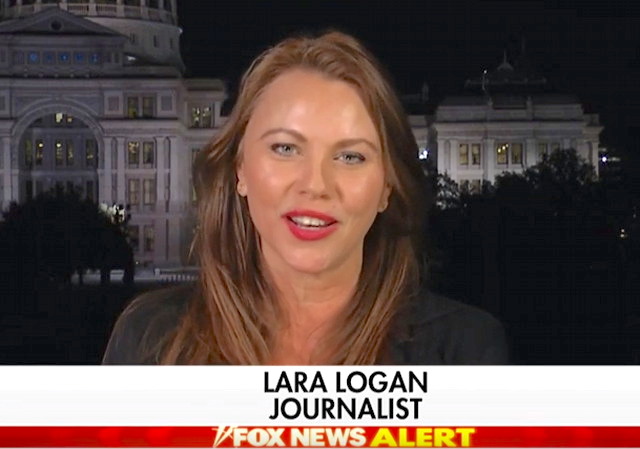 Former CBS News correspondent Lara Logan recently made an appearance on the Mike Ritland podcast, where she called out American media for its overwhelmingly liberal bias. Now she is under fire for speaking the truth.

She appeared on the Sean Hannity show last night to talk about what’s happening.

Tamar Auber of Mediaite has details:

Lara Logan to Hannity: I’m Being ‘Targeted’ For Saying the Media is ‘Mostly Liberal’

Defending her remarks on Hannity’s show, Logan said that as the result of her speaking out about how the media is “mostly liberal” she has been targeted because she is an independent voice.

“Any journalists who are not beating the same drum and giving the same talking points,” she insisted “pay the price” for not going along with the liberal crowd.

She also called out her targeters by name.

“I know they’re going to come after me,” she told Hannity. “Michael Calderone who is at the Huffington Post. I can give you the script now. I can tell you who the players are. Joe Hagan. Brian Stelter.”

Logan isn’t exaggerating when she says she is being targeted. The far left organization ‘Media Matters’ went after her almost immediately.

Media Matters has a bone to pick with Logan over her podcast interview, conducted last weekend, saying she downplayed the “massive journalistic failure” that led to the retraction of her 60 Minutes report on the 2012 Benghazi attack — which, in turn, led to her own lengthy leave of absence from the news operation. She returned six months later.

In the podcast interview, Logan blames a bad-faith effort by Media Matters. The watchdog responded Tuesday afternoon, calling her remarks “an embarrassing effort by a journalist to slough off responsibility for what she had previously acknowledged was her own substantial error.”

Washington Post media writer Erik Wemple also jumped in, with a headline that drips with condescension:

Now let’s review one of Logan’s segments on “60 Minutes,” regarding the terrorist attacks on the U.S. diplomatic compound in Benghazi, Libya, on Sept. 11, 2012; four Americans died in a chaotic night of fire and gunfire. More than a year after that attack, Logan anchored an investigation that laid bare just how shoddily Obama administration appointees had protected the installation.

The report emboldened already persistent attacks from Republicans on the Obama administration. “Sen. Lindsey O. Graham (S.C.) and other Republican lawmakers referred to [the segment] repeatedly during a Wednesday news conference,” reported The Post at the time.

“Graham said he would block confirmation of all of President Obama’s nominees, including Jeh Johnson as homeland security secretary and Janet L. Yellen as head of the Federal Reserve, until the administration allowed government witnesses to the attack to appear before Congress.”

The story, though, was bogus.

There were plenty of negative tweets as well.

1. CBS News’ Lara Logan is downplaying her own major journalistic failure — one that led to her report being retracted by the network and her taking a lengthy leave of access — and blaming it all on @mmfa. This is nonsense. Long thread coming… https://t.co/3mo8tlq8we

Way to prove her point, guys.

You can almost hear an alarm going off in newsrooms, saying: Discredit! Discredit! This is not a drill!

Very curious that Rush is dismissing Lara Logan as an opportunist.

“In times of universal deceit, to tell the truth is a revolutionary act.” – George Orwell.

I’m old enough to remember the day after Trump was elected when a shell shocked media, with tears still wet on their cheeks, dabbled with self-introspection to question their own lack of political diversity in the newsroom.

That lasted for about 5 mimutes. Because ‘MuellerRussiaHitlerResistance.’

“Oh, look! An example of dead white male cisnormal privilege that we can report on for every hour of every day! Those nasty Badthinkers will fear our fearsome reporting! Quick, copy what everybody else is saying.”

“So many other uninformed bigots are throwing rocks at our pure and righteous story that it only proves our correctness! They claim facts don’t match up with our narrative, which only proves how bigoted and wrong they are!”

“Oh. It turned out to be a fake. And we can’t even blame dead white male cisnormal privilege. Well, we can, but it just isn’t going well. Perhaps it is time for us to be introspective, think over all the things we did wrong with this story, and… Oh, look! Another story just like this one! It has to be what we were waiting on!

(go to the beginning and start again)

This, nowadays, is what passes as the news cycle.

Logan appears to be reasonably bright, is not at all hard to look at, and has some actual real world experience. Those are pretty good qualifications for a media creature. Fox ought to offer her an on-air job.

I have seen her reports from some godawful locations both in war zones and countries where life is cheap and being Western and White is dangerous. She is a tough woman and has earned her creds.

She is just a regurgitator of info, chief, not a commando.

There is no cause to pin medals on her.

Not to mention the fact that she has quite a story with Michael Ware and her present husband while abroad and those sexcapades were somewhat incorporated in the movie Whisky Tango Foxtrot.

She is a reporter, not a trigger puller. She is also a flawed human like the rest of us.

This is what happens to strong, independent minded women when they step off the Manhattan plantation.

Going on Hannity is like kicking a wasp nest, then again, why are the other network interview shows embargoing Logan? Looking at you, Terry Gross.

It is probably career suicide for her, but she is telling a truth that has been obvious for years, even decades.

She appears to be smart enough to excel in more than one career. I hope she does, because doing so will show others that they speak out and still prosper.

I knew a corporate attorney, another bigshot, who bucked big businesses agenda and still prospered. He was a corporate litigator, smart, decent. I came to like some of my corporate adversaries. Others, I was prone to destroy in very creative ways, they were clueless until I dropped the hammer 🙂

I am now retired, and no longer settling scores. But it was my policy, especially when I did not otherwise get justice, to really screw over those who played dirty and thought they walked on water.

I like Lara Logan’s style, maybe I should seek her out and mentor her about how to settle scores with nasty pieces of crap, whose egos are so big that they think they are untouchable. The thing about people like that is that they make so many enemies in their careers that they are unable to figure out who is making them live in interesting times.

There is no doubt in my mind that media has more than its share of nasty people.

You should write a book. I’d buy a copy!