“…to avoid further disruption on set, we have decided to remove the role of ‘Jamal’ from the final two episodes of the season.” 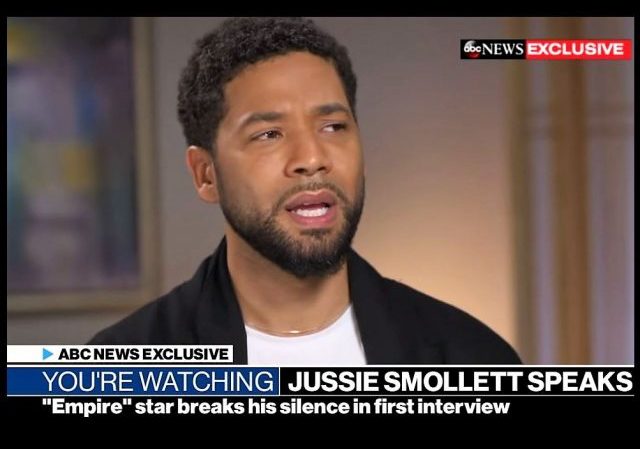 On Thursday, Jussie Smollett returned to the Empire set after he posted $10,000 in bond after the Cook County State Attorney’s office pressed charges against him for filing a false police report.

Smollett apologized to the cast and crew, but maintained his innocence. A person in the meeting told CNN that everyone was “shocked and dismayed” at his insistence and that Smollett chose to blame “the legal system and the media for his woes.”

Now Empire has cut Smollett from the show’s final episodes. From The Daily Mail:

The creators of Empire have cut Jussie Smollett’s character from the final two episodes of its fifth season which are being currently filmed, meaning he will not return to set.

In a statement to DailyMail.com on Friday morning, the show’s creator Lee Daniels and executive producers Danny Strong, Brett Mahoney, Brian Grazer, Sanaa Hamri, Francie Calfo and Dennis Hammer said the case had taken a toll on the entire cast and crew.

They did not reveal whether or not they believe Smollett’s innocence, but said the allegations against him are ‘disturbing’.

‘The events of the past few weeks have been incredibly emotional for all of us.

‘Jussie has been an important member of our EMPIRE family for the past five years and we care about him deeply.

‘While these allegations are very disturbing, we are placing our trust in the legal system as the process plays out.

‘We are also aware of the effects of this process on the cast and crew members who work on our show and to avoid further disruption on set, we have decided to remove the role of ‘Jamal’ from the final two episodes of the season,’ the statement said.

That means forever. If Jussie was unhappy with his salary before…..

So this is what the “nothing” part of double or nothing looks like. But at least by reaching “nothing” so early in the game, the opportunities to double down are greatly reduced.

Someone should introduce Jussie to Qyntel and say “this could be your future if you don’t start making some good decisions.”

All of this started because Jussie thought a $1.1 million/year salary was not good enough. The lessons to be learned here are endless.

I’m still not sure that I totally believe this as a reason for doing what he did.