Help or hurt her? Amy Klobuchar ate salad with her hair comb and made staff clean it

Help or hurt her? Amy Klobuchar ate salad with her hair comb and made staff clean it

Is it a “Stick a comb in her, she’s done” moment, or a Trumpian “You’re fired” appealing tough-gal narrative? 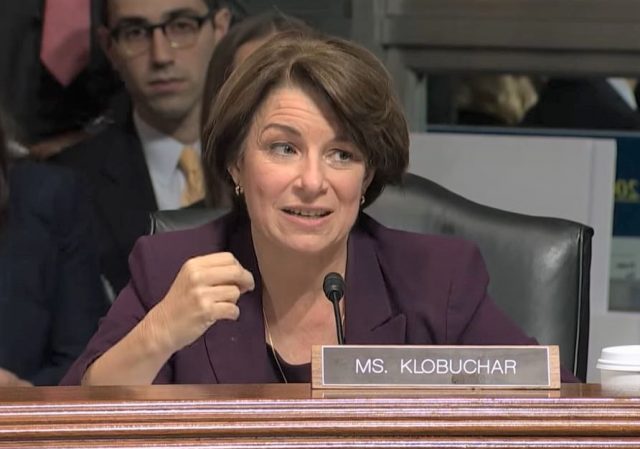 There has been a concerted effort to portray Amy Klobuchar as a brutal and mean boss who treated her staff poorly.

This has the smell of a classic oppo dump, using the media as accomplices. (In case you didn’t know, reporters are lazy, and if someone can spoon-feed them some oppo research, they’ll run with it with their own ‘investigation’ as cover.)

When she launched her campaign, Fuzzy asked whether Klobuchar was Minnesota Mean, or Minnesota Nice?

Having been reading for days about what a horrible human being she is, I was genuinely surprised to find Klobuchar so likable.  It’s not hard to imagine that the oppo research dump came from one (or more) of her 2020 Democrat competitors trying to get a head start on undermining her genuine charm and appeal.

Here are just a few of the stories that have been running across leftstream media:

Given how well she comes across, it’s not that surprising that the opening salvo against her targets her likability.

The latest Klobuchar story is that when she was traveling with staff, an aide scurried with a salad for her onto the plane but dropped the plastic utensils. Klobuchar reportedly was furious, pulled a hair comb out to eat the salad, then forced her staff to clean the comb.

The NY Times reports, How Amy Klobuchar Treats Her Staff:

An aide, joining her on a trip to South Carolina in 2008, had procured a salad for his boss while hauling their bags through an airport terminal. But once onboard, he delivered the grim news: He had fumbled the plastic eating utensils before reaching the gate, and the crew did not have any forks on such a short flight.

What happened next was typical: Ms. Klobuchar berated her aide instantly for the slip-up. What happened after that was not: She pulled a comb from her bag and began eating the salad with it, according to four people familiar with the episode.

Then she handed the comb to her staff member with a directive: Clean it.

The moment — an abridged version of which Ms. Klobuchar recounted herself in a speech to fellow Democrats at the time — encapsulates the underside of life on the Minnesota senator’s team, detailed in interviews with more than two dozen former staff members and internal emails reviewed by The New York Times….

I’m not convinced it hurts her. In fact, I’d argue it helps her.

First, it gets her name out there. Lack of name recognition is her main problem. The more people are talking about her, the more voters recognize her name, and the more she is viewed as a serious candidate.

Second, it’s a reflection that other campaigns and the loony left are afraid of her. She is positioning herself as the not-completely-batshit-crazy progressive who can appeal to the center. If she’s catching flak, she’s over the target.

Third, being an overly tough boss is not a negative when it comes to a chief executive. She’s also flipping the narrative, framing it as having “high expectations” of people who work for her, and admitting that yes, she’s a tough boss.

This is not a bad persona for a candidate. I’m so old I remember when the persona of being the ultimate tough boss worked out pretty well for a political candidate.

Stick a comb in her?

Though it’s tough getting the image out of my head.

Makes one think the Fuhrers’ of the democrat party want kamala to be the choice when one compares coverages.

Is that fresh Parmigian on your salad?

Parmigian. That’s a cheese first produced by an Ameriian family, the Parmigians. They came to America after the Turkish massacres. They settled in California’s Central Valley, and became dairymen.

That’s so offensive!
You are now supposed to call them “dairypersons”.

I’m not exactly Mr Fastidious, but there’s no way I’d eat a damn salad with a comb.

Did she sprinkle some feminine hygiene products on it too, just to add a little flavorful zing?

Name recognition is fine, but not when it’s associated with . . . well, whatever.

Sorry, but I find it difficult to spend one moment fretting about the political fortunes of the likes of Amy Klobuchar. She’s not someone I would ever under any circumstances vote for so I don’t care if her fellow liberals take her out.

When attending Marine Corps boot camp, our drill instructor taught us to was our hands before using the facilities. Ms Klobuchar certainly didn’t learn her sanitary habits from the Marine Corps.

The person she ordered to get the comb then wash it afterwards had to have been disgusted. Especially to leak the story later. I find the story disgusting too, those are hard optics to overcome. To this day I can’t hear kasich’s name without picturing him stuffing huge portions of food into his sweaty, greasy head. I don’t think kasich has personally recovered from that observation from President Trump.

I think the story about making her assistant shave her legs is more telling.

How far up did they have to go?

Her reported treatment of her staff aside, what this illustrates is a potential executive who is ill prepared to deal with the real world. What percentage of American women do you suppose have a plastic fork and/or spoon in her purse? Most mothers do. How does this look to that demographic? It looks like we have a potential leader who is unable to take care of herself, without help. It looks like a prima donna who would demand that her staff pick all the yellow M&Ms out of her candy dish. Will this hurt her in the primaries? Probably not. Will it hurt her in the general election? It might, with the change in demographic.

Personally, I am not too interested in the Democrat candidates. As in past elections, the candidates will run left of Josef Stalin, in the primaries. Then, they change their clothes and run as moderate centrists in the general election. It is all theater. In the next general election, a lot of the result will depend upon which liberal groups and how many members of those groups stay home.

The comb might have been recently cleaned. If I was in her shoes, and hungry, I’d have done the same thing. Then, if I was busy, I might have asked one of my aides, “If you don’t mind, would you please wash this comb in the bathroom sink of the plane? I’ll be busy watching videos mocking Jussie Smollett for a while, and I don’t want to break my rhythm.”

Comb? No way. Rather use a pen cap (after washing it, of course).

No, a comb is better. With the right piece of lettuce, it makes an excellent kazoo.

“If she’s catching flak, she’s over the target.”

Not really. This primary is a sudden death cage match of mediocrities (I’m being kind). This info was leaked because it was an easy shot to take.

Every single one of those candidates is focused on exactly one thing: Big $$ Donors. Anything that can thin the herd makes it that much easier for the survivors to corner the money they need to support a real campaign.

The things I have read — having her staff SHAVE HER LEGS??!!

This woman is out to lunch, and saying she’s the least bat-shit crazy is damning with faint praise…

Hillary Clinton was vicious to staff and her protectors. Too hell with the dem prima donnas.

I don’t believe every character assassination story put out on Republicans, so I’m not deeply moved by one against a Democrat by Democrats. I understand why you’re blogging about it, I’m just explaining where I am coming from.

Where there is smoke, there is fire.

With this woman, there seems to be a lot of smoke.

If I believed that blindly I’d sound like Ragspierre.

Don’t say that about yourself.

exactly where IS minnesota? and they have democratic senators? wasn’t that the place that a village was attempting to enact sharia law? and they eat with hair combs?

what a destination it must be

She probably has as many skeltons in her closet than hillary clinton.

“… I was genuinely surprised to find Klobuchar so likable.”

Sociopaths can come across as “likeable.” It is one of their skills. It is also a warning sign that is heeded by looking for patterns of controlling behavior. Toughness (a vague word that would be about the substance of the task) and meanness (perhaps less vague but about how people are treated by her) are not on the same dimension.

She sounds dangerous to me and is thus a viable Dem candidate.

Her father was a raging alcoholic, according to published reports. Sounds like she’s inherited some of his rage and dysfunction.

Can she be easily set off, and does she have an explosive temper? Frustration tolerance is a valid question for a candidate for President.

I think it looks like a hatchet job. I am more interested in her , and any other politician’s performance.

With that sort of behavior now, I can see her turning Marines into umbrella stands like Obama did.

Interesting variation on the “Waiter, there’s a hair in my soup joke.” But if she were really tough, she would have just combed her hair right after eating.

If the story is true, it shows poor impulse control, low time preference, pettiness, and petulance. Exactly what we expect from politicians. It also shows she is dumb enough to make enemies of her personal staff. Bag of hammers dumb.

If she was in the entertainment biz—instead of mere government—she’d have demanded that the plane land and somebody get her a proper fork.