Comes across as more likable than many other Dem candidates, in contrast to reports she’s a “Mean,” “Bad Boss” 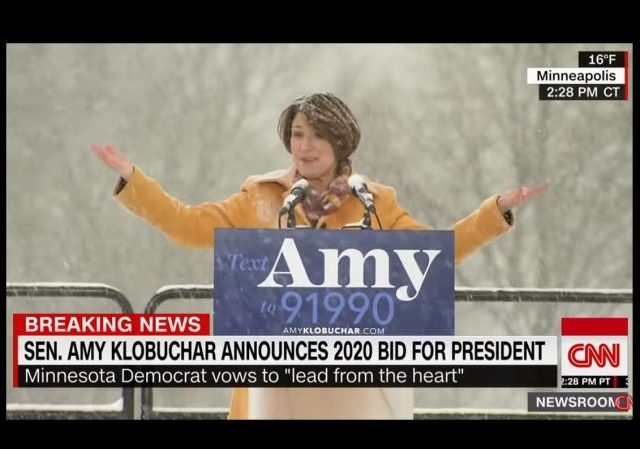 Over the past several days, there has been a flurry of news “reports” about Senator Amy Klobuchar (D-MN) being a “mean boss” and a “bad boss.”  In sharp contrast to these accusations, Klobuchar’s 2020 presidential campaign announcement shows her to be immensely likable.  She has that genuine “it” quality that stands in sharp contrast to Elizabeth’s Warren’s Saturday launch.

Having just seen the Warren launch, I had to smile as Klobuchar begins her speech by thanking, rather pointedly I thought, Minnesota Lieutenant Governor Peggy Flanagan and noting that Flanagan is “the highest ranking Native American state official in our nation.”  A few minutes later, she mentions that the Mississippi river, the central theme of her speech, is Native American for “the father of waters,” a reference totally irrelevant to her speech.

In all honesty, this is the first time I have listened to Klobuchar give a speech, and I wasn’t expecting to find her so personable, so yes, I’ll say it again, likable.  It was a pleasant surprise, and I think the contrast between her and the triumvirate of angry Democrats (i.e. Warren, Kamala Harris, Cory Booker) stands her in good stead.

Having been reading for days about what a horrible human being she is, I was genuinely surprised to find Klobuchar so likable.  It’s not hard to imagine that the oppo research dump came from one (or more) of her 2020 Democrat competitors trying to get a head start on undermining her genuine charm and appeal.

Here are just a few of the stories that have been running across leftstream media:

Given how well she comes across, it’s not that surprising that the opening salvo against her targets her likability.

She posits herself as someone who can unite the country, and it’s not hard to see why she thinks so.

Klobuchar, a moderate, Midwestern Democrat who has served in the Senate since 2007, highlighted in speech her ability to work across the aisle with Republicans and her “grit” as Democrats try to win back voters in a region that supported then-candidate Donald Trump in the 2016 race.

“We worked across the aisle to get the federal funding and we rebuilt that I-35W bridge — in just over a year,” Klobuchar said in her speech with the Interstate 35 bridge over the Mississippi River as her backdrop. “That’s community. That’s a shared story. That’s ordinary people doing extraordinary things,” she said in her prepared remarks.

She added: “But that sense of community is fracturing across our nation right now, worn down by the petty and vicious nature of our politics. We are all tired of the shutdowns and the putdowns, of the gridlock and the grandstanding. Today on this snowy island, we say enough is enough. Our nation must be governed not from chaos but from opportunity. Not by wallowing over what’s wrong, but my marching inexorably toward what’s right.”

While it’s easy to see why she is considered a “moderate Democrat” in light of the absolutely loony Green New Deal embraced by many of her Democrat 2020 opponents, Klobuchar’s remarks reflect a pro-amnesty, pro-universal healthcare, pro-gun control, pro-net neutrality, pro-crippling regulations in the name of “climate change” stance that sounds pretty radical to my ears.

That said, she’s going to be a formidable opponent for her socialist/communist/progressive opponents.

Nate Silver over at FiveThirtyEight has written an interesting analysis based in no small part on her likability and appeal to voters in “flyover” country.

Minnesota Sen. Amy Klobuchar announced her candidacy for president at a rally in Minneapolis on Sunday, becoming the fifth Democratic senator1 to launch a campaign. In contrast to some of the big names — Kamala Harris, Cory Booker, Elizabeth Warren — who had been expected to run for president for years, Klobuchar is a little bit more of a homespun, independent-label candidate.

But being on an indie label has its upsides and downsides. On the one hand, there’s perceived authenticity and the ability to build momentum from modest expectations. On the other hand, there’s the question of whether your product can get into the hands of consumers without having major-label marketing muscle behind it — and, if so, whether it can expand beyond a niche audience.

Silver lists four potential advantages for Klobuchar (electability; Potential strength in Iowa, and in the debates; the beer track [aka “‘flyover-state’ moderates”] … without the baggage?; and a reasonably clear contrast to Trump.) and two potential problems (Lack of a clear path with nonwhite voters and staffing a campaign and building support among insiders.).

On her potential strengths, Silver concludes:

Overall, this is an impressive list of strengths, even if some of them are quite hedged. They’re why Klobuchar has a considerably better chance of winning the nomination than you might guess given her relatively low profile.

She has about as much of a chance as Pat Paulson.

Trying to care about yet another Dem drone Presidential candidate… Nope, can’t do it.

Ladies and gentlemen, I’m officially announcing my candidacy for president on the (D) ticket. I am running as a freedom and liberty-loving government-hater. My VP choice is a case of Shiner beer and I promise everyone a free ticket to one PBR event of their choice. I have as good a chance as any of these clowns.

Did she end up with frostbite? No gloves in 14 degrees and snowing? Is she a complete idiot?

Heh. No, she’s from Minnesota; 14 degrees probably seems balmy to her, thus the hammering on “climate change.”

When I first moved to Massachusetts from Florida, I bundled up in winter like I was going on a month-long trek in Siberia. As I became more used to the cold, I dropped a lot of the layers (at first, I wore a woman’s version of long-johns–hopelessly cute and a lovely pale pink, but totally stupid because once I got indoors, I was near-fainting hot). No, I never quit wearing gloves . . . even though it rarely got, as locals liked to say, “wicked” cold.

She has as much chance as a snowball in hell, and she’s not a nice person. She wishes to enslave everyone to her benefit, just like the rest of the corrupt party she is a member of.

If there’s a D after the name, that’s all I need to know.

As dogs to their vomit.

Minnesota does not elect Presidents. Their one candidate was a sacrificial lamb.

She’d auditioning for Vice President. It’s either Harris or (if he decides to run) Biden that will be the Democrats’s nominee.

I don’t know. I don’t see any Democrat who can beat Trump in 2020. The closest is Spartacus, but he’s got some closets to air before he becomes remotely viable.

After that ‘special guest appearance’ stunt at the Grammys last night I predict that it’s gonna be Michelle O by acclamation at the Democratic Convention. Currently the Dems couldn’t have a worse slate of presidential candidates if they had been hand-selected by the RNC. Michelle comes across to the average uninformed millennial voter as someone who checks all the racial/feminist/gender boxes without the pesky problem of actually having a record to defend (sort of like another Obama we know). Once Bernie and Uncle Joe throw their white male patriarchy hats in the ring, Michelle will swoop in to save the party. I hate the idea, but it’s gonna happen.

What’s her motivation? She already has all the material benefits the Presidency confers—the fame, the fortune, the free medical, the armed guards. Being President Regnant gains her nothing she doesn’t have already.

Shell run if the Obama puppet masters tell her to run.

I am at work so I can’t give a good listen. I scanned and played less than 10 seconds to get a feel for her voice. I heard Trumpisms: “Incredible” and “Unbelievable people.” Maybe it is the subtle Trump manner that struck you. I wonder who was actually behind the recent story of how she berated her staff? I bet another D.

and I wasn’t expecting to find her so personable, so yes, I’ll say it again, likable.

Well, yeah, she wouldn’t impress you, but what about the millions of flyover country voters who will take a quick shine to her? She’s charismatic and comes across as real, and since the #NeverTrump loons seem to think that Trump is the worst the nation can do, she’ll get their vote before some nutter crazy Green New Dealer does.

She’s charming with a positive attitude. She def exudes friendliness without coming off with that annoyingly phony sugar-sweet real estate agent persona.

I wonder if she there binders full of women at her staffers?

Senator Amy Klobuchar ,yet another of the Marxist hags that no one will vote for.

Just what we need..another Minnesota cloaca.

It is easy to come across as friendly an warm for short periods of time. I’d listen to her Congressional aides.