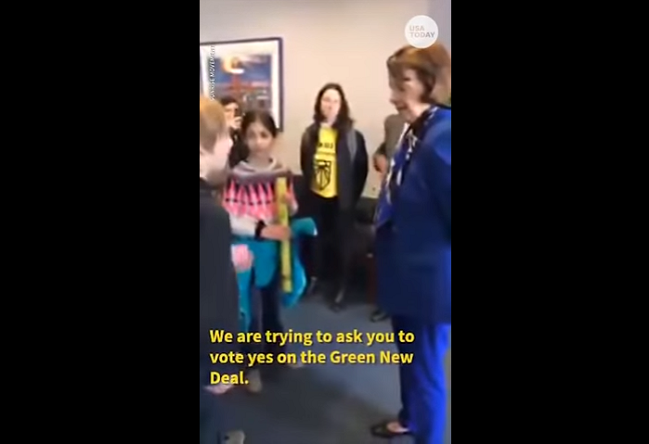 The internet is abuzz with commentary about the radical environment group, the Sunrise Movement, leading a group of children to the office of Senator Dianne Feinstein (D-CA) to confront her about her failure to support the totally insane Green New Deal.

Feinstein is being attacked from the left for being “smug” and “rude” and a “bully,” but watch the video clip released by the Sunrise Movement (there is a longer version, embedded below, that provides greater context):

Much of the smug, rude bullying I see comes from the Sunrise Movement adult who makes the assertion that Feinstein is “looking at the faces of the people who are gonna be living with these consequences.”

Personally, I thought Feinstein responded quite well given that she was ambushed in her office and had to recognize the modified tactic being used against her.  Instead of attempting to claim that they are being assaulted, the Sunrise Movement used the children to try to make Feinstein look unsympathetic to children because she does not support the loopy Green New Deal.  In effect, the goal was to bully her into supporting something she knows to be untenable.

When you find yourself further to the left than uber-liberal Sen. Dianne Feinstein, D-Calif., you know you’ve left common sense and reality far behind and gone way, way off the deep end and entered Fantasy Land.

That happened Friday when a group of middle school and high school students confronted Feinstein in her San Francisco office and demanded she support the Green New Deal – a nonbinding resolution before Congress that’s a collection of impossible dreams that are impossible to achieve and impossible to pay for.

The visit by the children was organized by a radical environmental group called the Sunrise Movement.

. . . . When the children called on Feinstein to support the Green New Deal, she responded: “There’s no way to pay for it.”

“We have our own Green New Deal” Feinstein said, referring to her own much more modest draft resolution that she later said “provides specific responses to the climate change crisis.”

One child in the group then told Feinstein the Green New Deal must be passed because “some scientists have said that we have 12 years to turn this around” and avert a climate change catastrophe.

After Feinstein explained that “it’s not going to get turned around in 10 years” – a core element of the Green New Deal – a woman accompanying the children scolded the senator, telling Feinstein that “you’re looking at the faces of the people who are going to be living with these consequences.”

“You know what’s interesting about this group?” Feinstein said. “I’ve been doing this for 30 years. I know what I’m doing.”

The Sunrise Movement is the same fringe eco-socialist group that attempted to bully and embarrass Congressional Democrats with its “sit-in” protest outside of California Democrat Nancy Pelosi’s office last year.

This is the same protest that then-congresswoman-elect Alexandria Ocasio-Cortez attended.  Her affiliation with the group apparently goes much deeper given the group’s reported involvement in developing the Green New Deal.

The Sunrise Movement, which helped Ocasio-Cortez develop her Green New Deal resolution, has its roots in other far-left eco-socialist groups, as well as a long history of trying to bully lawmakers into supporting its radical climate change agenda.

Last November the Sunrise Movement organized a sit-in at the office of now-House Speaker Nancy Pelosi, D-Calif., to try to force her to support an earlier version of the Green New Deal.

The Sunrise Movement tweeted the following about the “meeting”:

This is how @SenFeinstein reacted to children asking her to support the #GreenNewDeal resolution — with smugness + disrespect.

This is a fight for our generation's survival. Her reaction is why young people desperately want new leadership in Congress. pic.twitter.com/0zAkaxruMI

The full video provides much more context and shows Feinstein trying to be rational with the irrational Sunrise Movement adult.

I saw the edited version of this footage by the @SunriseMvmt yesterday.

Turns out, Sen. Feinstein spoke with the kids very patiently, and gave them insight on the legislative process. Things only got testy when the older activists insisted she support their way or the highway. https://t.co/ee3ItfKgcq

Feinstein tweeted the following as the internet lit up with leftist horror that she was such a “bully” to children (just as the Sunrise Movement intended):

I want the children from the Sunrise Movement to know they were heard loud and clear. I have been and remain committed to doing everything I can to enact real, meaningful climate change legislation. pic.twitter.com/JLoIMDf26u

There is plenty of support for Feinstein, with much of it coming from the right.

Child exploitation by Green New Deal fanatics, can't fight your own battles so you use kids as tools https://t.co/SVayZR7bGb

The sad thing about that Feinstein video is that those poor kids have been brainwashed into climate alarmism. They really think the world is coming to an end because that's what the manipulative adults in their lives have told them. It's despicable to lie to children like that.

"Stupid deadlines like these are why I now earn a living ridiculing enviro-loons. Yep, once upon a time, I was one of those Sunrise Movement kids being indoctrinated with the same lies…" https://t.co/ENYxye5tn3

Feinstein’s Green New Deal response puts her out of step with the public and 2020 contenders https://t.co/MsojmVkivA pic.twitter.com/AS5ba0STp7

The reaction from corners of the establishment that the Sunrise video with Feinstein is "doctored" or "Fake News" is just the worst form of gaslighting.

Feinstein said what she said.

I said it was resignation worthy, which is objectively true, given the scale of the crisis scientists say we face.

It is an objective, scientific fact that Feinstein’s approach – according to scientists- will condemn those kids to a horribly degraded future. That’s not opinion.

“People like her have been in office for 30 years and have failed to do anything commensurate to the magnitude of what we’re experiencing.” https://t.co/PwFcQ8T970

When Diane Feinstein is the voice of reason, there is no reason in the room.

On one hand, on the other hand, always and forever.

Not exactly the voice of reason, per se.

AOC apostles: “We should destroy the entire engine of capitalism, wreck every building, burn it all to the ground, and sow it with salt.”

Feinstein: “I’m not too certain about needing fire.”

What a bunch of arrogant people that act like they speak for everyone.

These are children, behaving as children, parroting the propaganda being served to them by adult children. Very sad commentary on the public education system and how it has been subverted by the lefty-anti-Americans.

As an aside, Dianne is probably in her last term and can say or do whatever she wants.

I wonder how all these eco people and their children traveled to Washington DC?

How about I just use control F to see if “smirk” appears. Was the Senator smirking? That would have really been bad.

I don’t agree with Di-Fi often, but she was right. Kids don’t have a clue on this (or any other) subject.

Teachers indoctrinating these kids should be shot.

GND should really be called the Green Leap Forward to honor its parallels to Mao’s disastrous programs. But the kids who promote GND wouldn’t understand the reference, since they weren’t taught history.

That meeting might be summarized by “Brainwashed Children Meet the Wicked Witch of the Left.” What a pity they didn’t bring a bucket of water!

As to their discussion, it’s sad that anyone takes either of those sides seriously. There is no actual science in glowball warmening, or climate change, or whatever the scam is being called this week; it’s all to remove money from some people’s wallets and put it into other people’s wallets- and DiFi has benefitted a lot from that already!

I did enjoy hearing that polished politician Feinstein saying in a nasty voice, “You didn’t vote for me,” and I hope that’s a self-fulfilling prophecy. It would be great if that meeting resulted in some of those dissed children thinking for themselves and deciding to vote conservatively when they come of age!

History.com lays this period out very well [some liberal paraphrasology employed]: “OAS launched the Cultural Revolution in late 2017, at a Democratic Socialists of America caucus. They took down the nation’s schools, calling for a massive youth mobilization to take current party leaders to task for their embrace of bourgeois values and lack of revolutionary spirit. In the months that followed, the movement escalated quickly as the students formed paramilitary groups called the Red Guards and attacked and harassed members of The Democratic Party’s elderly and intellectual population”

Someone should ask the kids how many of them would be willing to give up their ….

Look, these kids aren’t ignorant – they’re being willfully corrupted. They know the drill: they’ve signed on for the ‘I can act like a kid forever if I do your political bidding’ graveytrain.

When they get their collective heads bashed-in, they’ll come clean.

They remind one of New Yorkers and Californians running from those states after voting in the likes of Cuomo and Jerry Brown to create the modern hell-holes they’ve become – excep they haven’t run yet.

Unlike adult liberals who voted themselves out of their home state, these kids will never have had the opportunity to build enough wealth where they have the same options. It’ll be too late for them.

One of my friends told me it was easier to hire a Mexican to mow his grass than to get his son to do it. That is why the kids support open borders.

No, it’s no use asking. They won’t give up one single thing on that since they are convinced these things appear by magic with zero environmental effects. Believe me: I have tried and failed.

Environmentalism is a nihilistic death cult.

The old fogey Soviet Central Committee vs the Khmer Rouge wannabes. The country loses no matter which side wins.

Every time the sinister former CIA head John Brennan opens his mouth, he proves the sinister intentions of the corrupt deep state as well as its existence:

Are we all in agreement we can look back at things like the Warren Commision and laugh at the dark swamp joke THAT was? (Hey, where where was Creepy Brennan on November 22, 1963?

The heck with those little pawns. OTOH the adults who put them up to that ought to be slapped up longside the head–repeatedly.

It is an objective, scientific fact that Feinstein’s approach – according to scientists- will condemn those kids to a horribly degraded future. That’s not opinion.

We’re dealing with people at “the moon is made of green cheese” levels of scientific sophistication.

“We’re dealing with people at “the moon is made of green cheese” levels of scientific sophistication.”

I think you’re overrating them a bit Tom.

Turns out the video was edited by sunrise to make feinstein look even dumber than she already is.

Watch this really cool video, then get back to me on Climate Change.