Right on cue, the state’s eco-activists are blaming climate change for this development. 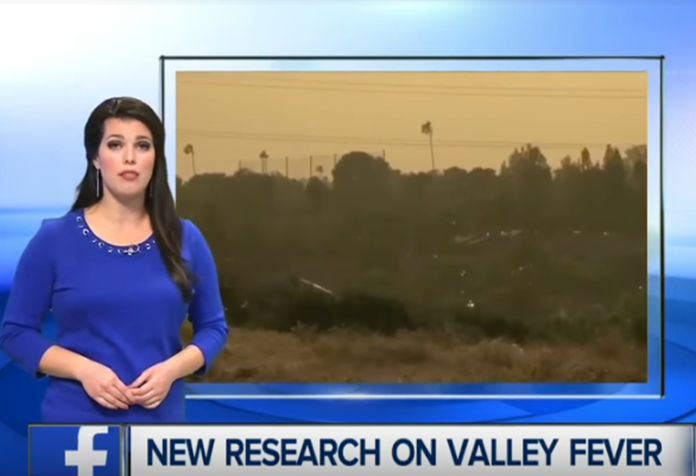 The number of Valley Fever cases rose eight percent in 2018 from the previous year – up to more than 8,100 from more than 7,500, according to a report released by the California Department of Public Health last week.

For me, this news is both unsurprising and disturbing. The most common way to contract Valley Fever is by inhaling Coccidioides fungus spores found in dusts and soil. A dear friend, a robustly healthy young woman, spent a year battling this disease via a combination of anti-fungal medicine, nutritional experimentation, and will-power. We suspect she picked up the virus while we were all camping together outside of Los Angeles, and I shudder to think what could have happened if my son caught the disease.

Neighboring Kern County has been hardest hit, with 9 recorded nine deaths in 2017. This is the second-highest number since the county started keeping track of cases in 1992 and the highest number in over a decade.

Statewide, the number of reported cases quintupled from about 816 cases in 2000 to more than 4,000 cases in 2012. During that period, a total of 1,098 death records listed coccidioidomycosis as a cause, averaging 78 deaths annually, according to state public health data. Since then, Valley Fever cases have continued to trend up and state health officials have yet to pinpoint the exact cause.

In fact, a new medical study is looking for volunteers in Kern County to improve the treatment of Valley Fever.

Symptoms of Valley Fever mimic the flu or colds and can include a rash. They appear 1-3 weeks after exposure and can last for months. Between 5 to 10% of people who get Valley fever will develop serious or long-term problems in their lungs. The fungus can also spread to the brain and skin, causing abscesses and occasionally death.

Of course, because this is California, our green justice warriors are hot to blame climate change for this development.

The combination of California’s high exposure, high social and economic vulnerability, and the world’s upward trend of carbon pollution means the health harms of climate change are accruing faster than the state can respond. For instance, our new issue brief finds that:

I will just point out that between the Global Warming Solutions Act of 2006 and our former governor’s race to embrace the Paris Climate Accord, the state’s climate should be preventing such catastrophes.

Hopefully, the researchers will find a cure quickly, as climate solutions to this problem will not be nearly as effective as medical ones.

Of course every goofball can still blame climate change on this because even though Calif. has passed laws, slobbered over the Paris thing, etc., none of that can change the climate in one state. The rest of the country, according to them, and the world (but especially America) must give The Smart People control over everything. They’re never gonna own up to the ridiculousness of their claims. They’re just too dang smart.

did we take a gigantic left turn and head for the dark ages, when will they start the blood letting to cure illness, the anti vaxers have taken over California. guess all the work Pasteur did was for naught.

Is there anything it can’t cause?

Well, it can’t cause environmentalists to think and act rationally.

It can’t cause the warming or the cooling of the planet.

The spike has nothing to do with “climate change,” but it IS weather-related. The disease is caused by a fungus, which thrives under certain conditions. There is absolutely nothing unexpected about this peak, as the case numbers are cyclical based upon rainfall levels. That said, I hope that the attention this brings encourages more research and funding for treatment.

As for your fears about family members “catching” Valley Fever, Ms. Eastman, rest assured that MOST cases go unnoticed, as they resemble nothing more serious than a common cold. Many residents of the Central Valley will test positive for having had Valley Fever, without ever having noticeable symptoms. In fact, should the young woman you mentioned have come in contact with the spores while you were camping together, you might have been exposed, too. I am sorry truly for your friend, though. The serious cases of Valley Fever are frightening (I spent months on the couch when I had it, and my mom’s case resulted in it disseminating into her bones) and can progress to devastating if the brain becomes involved.

As a Chula Vista kid in the 60’s we lost a couple friends to unknown reasons, one later positively ID’d as Valley Fever, the second – likely. It was a widely-unknown thing then, when massive subdivision grading probably stirred way more up than now. I think it’s been historically unreported until it became an enviro-tool

Anonamom and Frank G have it right. While I live in Los Angeles, I’ve spent a lot of time flying in model airplane contests in the southern San Joaquin—Kern County in particular. Valley Fever has bupkus to do with climate change. It has to do rather with disturbed soil. It comes from a fungus that lives in the ground–and those funguses (or fungi) can be huge, maybe as much as ten or more miles across. You disturb the ground–say by building a new housing subdivision, or you have a bad wind storm and the spores from the fungus get in the air. They enter your lungs. For most people, it’s like a mild cold. But for others (and in this way it’s just like tuberculosis) the spores and infection migrate to other parts of the body–the brain, the liver, the heart, other organs or the bones. And in many of those cases it can be fatal. I have friends who have died from it. I’ve got another friend who survived, but had a bad case of it. He will not fly on any dirt surface ever–too afraid of a recurrence.

And Valley Fever (or rather the fungus that causes it) is not confined to California. There’s a good deal of it in Arizona as well–and some in Nevada.

(I am confused – you mention it is a “virus” (first full paragraph after the article excerpt) yet it sounds like a fungal infection, from fungus found in the soil……)

“Climate change” is the immediate go-to for anything on the left – as you and the Professor have documented often (and others, as well). The left counts on people staying ignorant, not doing their own research, believing everything they’re told by pseudo-science, environmental wackos (not true conservationists, but the hard left ones), and the of course the complicit media. That way they have more “evidence” that they NEED to pass climate change laws to CONTROL us.

It is absolutely not a virus.

Interesting how they leave out Arizona having it too. I was well aware growing up in Tucson that Valley Fever was a common disease lodged in our soils.

Yes, a friend in Surprise AZ caught it last year. In AZ we do not blame climate change.

Valley Fever was not unheard of at all in my Arizona childhood in the 1950s and 1960s. Mild cases go undiagnosed. A few people got the more serious cases. I have a spot on my lung, which was found when I got older and my doctor did a routine chest X-ray. They followed up for a while until I suggested that the spot, which does not change, may be from my southwestern childhood.

The idea that this outbreak is being caused by “climate change” is nonsense.

Population growth not even considered a factor in any increase ?
There were 33.8 million people in CA in 2000.
now about 39.5 million.

Mis-identification of the disease not considered a factor ?

Coccidioidomycosis, Valley Fever, is a fungal disease which has been known to exist since the late 1800s. Due to the fact that an estimated 60% of those infected show now symptoms of insignificant symptoms, it is impossible to state, with any accuracy that there are any more cases today than there were in the past. In the past, Valle Fever was routinely misdiagnosed as a variety of respiratory conditions, with influenza being the most common diagnosis. As diagnosis has become more reliable, it can be assumed that some of the observed increase is due to better diagnosis. And, with accurate diagnosis and treatment, the number of persons who experience the most serious symptoms account for a small percentage of those infected. The more serious cases usually appear in people with reduced immune systems. This would include infants, the elderly, excessive drug and alcohol users and the homeless.

By the way, increased spore levels, which cause the disease, occur during periods with higher levels of rain, as the water encourages spore release.