The Wine Country Wildfires may end up being Brown’s lasting legacy. 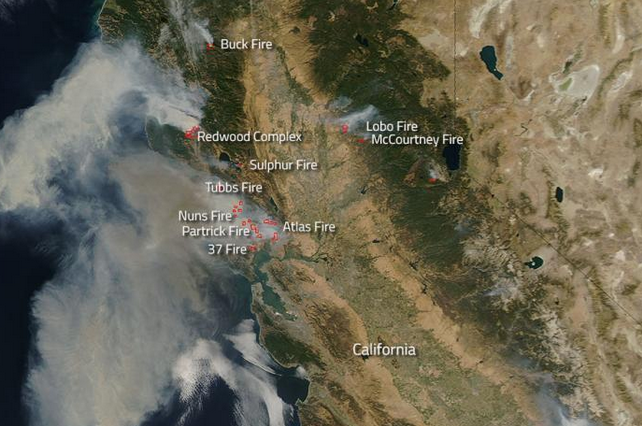 Since President Trump has been elected, California Governor Jerry Brown acts like he is the President of California instead of a state official.

Brown’s recent executive acts and rhetoric have chiefly attempted to create a “climate change” legacy that will last after his final term as governor concludes. For example, Legal Insurrection has covered:

I suspect that the Wine Country Wildfires will turn out to be Brown’s Katrina, the legacy for which he will truly be remembered. The death toll in these devastating blazes has already hit 23, and 315 are now reported missing.

Firefighters are simply fighting to contain the infernos and save lives, and many California residents are already registering concern over the origin of all the blazes. There has been speculation that downed power lines or arson may be the reason why 17 fires broke out in such quick succession.

“Why we had so many big fires, the investigation will give some indication on that,” J. Keith Gilless, dean of the College of Natural Resources at the University of California, Berkeley said on Tuesday.

Scott L. Stephens, a professor in the College of Natural Resources, said that falling power lines and arson are both being considered. All of the fires seemed to ignite between midnight and 2 a.m. Monday, when winds were the strongest, he said. Branches or trees could have fallen on the lines or the lines themselves failed, he said.

“And the other one is arson of course, and I know that’s being looked at too,” he said.

The National Aeronautics and Space Administration indicates that lightning strikes may have sparked the fires.

“Dry, hot conditions which have been problematic for much of the west coast this summer erupted into flames after a series of lightning strikes,” NASA said. “October is always a difficult time in California for wildfires, but this year, the wildfire eruptions seem extreme even to the most seasoned Californian. The deadly combination of lightning, winds, and hot weather which dries the landscape into tinder is all it takes to set off a wildfire that will consume thousands and thousands of acres in just a few short hours.”

According to the National Weather Service, a flash of lightning most often appears in a flicker-like motion, but sometimes lightning can flash in a continuous flow of electricity. In the latter flash, the lightning heats up an object and can cause it to ignite.

No matter the ultimate cause, 2017 was anticipated to be a potentially bad wildfire year, because recent rains led to more growth in drought-impacted areas…but not enough to leave enough moisture to make ignition difficult. Instead of focusing on infrastructure, security, and disaster preparedness, Brown’s effort went to becoming an international climate change star.

Additionally, he vetoed a bipartisan bill in 2016 aimed at reducing the risk of wildfires from overhead electrical lines.

The author of the measure — passed unanimously by both houses of the Legislature — now says the governor missed out on a chance to tackle one of his state’s longstanding vulnerabilities: massive wildfires endangering residential communities. But the governor’s office and the California Public Utilities Commission say the bill duplicated efforts already underway among the CPUC, Cal Fire and utilities like PG&E.

California accounts for nearly 90 percent of American wine production and is the fourth largest wine producer. So far, 14 wineries of the 1200 in this state have been destroyed. However this list, like the death toll, is likely to increase.

California will be electing a new Governor in 2018. A smart candidate would make preventing this type of disaster from occurring again a centerpiece of the platform, instead of pandering to eco-activists.

Meanwhile, the Wine Country Wildfires are likely to be Brown’s lasting legacy.

I wouldn’t be surprised at all to find that Brown and his inner circle had privately told each other that a few more wildfires would be a “good thing”, from their ideological pov, since they could use that to advance their narrative about the Evils of Climate Change.

while in fact it just illustrates the evils of doing nothing while a heavy load of dry fuel builds up on the ground.

Arson undoubtedly played a part, simply because there are always some around, and always will be. “Some men just want to watch the world burn”. But the wind and the timing makes it sound as if a lot of this is just power lines getting knocked down because they’re weak and landing on dry brush.

Mann Made Global Warming ™ catastrophilia has been responsible for a number of human catastrophes in Australia over the last few years.

Because of climate regulations land overs in Victoria were not allowed to clear fire lanes, move dead fall (otherwise known as FUEL) from their land on pain of imprisonment!

And of course the same level of state incompetence was repeatedly in Brisbane that lead to massive, human life taking flooding!

California will be no different. The death toll will be what it is BECAUSE of regulations brought in to supposedly deal with Mann Made Global Warming ™ that instead needlessly took the lives of people for no other reason than the vanity of Brown.

… but … but if Jerry Brown hadn’t worried about Global Warming, the Cannabis would now be on fire.

this is no joking matter but the LibRules must have their pound of flesh.

it is a sad thing when a state like Cal with so many natural and human resources go to pot.

Not a single federal dollar of help until the clowns in California rescind their sanctuary state bill.

As a California resident and homeowner, I completely agree.
Further, any tax reform bill should eliminate deductions on federal taxes for state and local taxes, which deduction facilitates wasteful state spending, especially in deep blue states like California.

as a #Failifornia native, home owner & wine drinker, i second your emotion. 8)

On a national level— this issue seems to be like the death tax…Every year there are hundreds of millions in damages, yet every year it doesn’t get fixed.

You are more likely to die from one of these fires than from terrorism. Can we trade a few jdams for better prep and response?

While the states are to blame, it’s unviable for a single state to keep all the resources on hand to fight one of these with the resources required and an area where the feds are massively underfunded IMO.

False choice. First we would have to override the eco loons and allow brush clearing around dwellings no matter how many rats go extinct.

brush clearance around buildings is mandatory.

it’s clearing out the dead wood & brush in the wilderness that never happens because logging is effectively forbidden, and fire suppression allows fuel to build up to where the inevitable is effectively unstoppable.

if only we could predict when santa ana winds might occur…

How many JDAM’s would it take to fix Sacramento?

CA is no mood for moderation of Gov Brown’s policies. Quite the contrary. The next Gov will be to the left of Brown.

Far to the Left. They have already functionally seceded from the country, without the formal declaration. They need to either be brought back in involuntarily by whatever means, or cut off to sink or swim. In the latter case, we need a north south wall also, built on the western border of whatever California counties remain in the US. Think West Virginia.

By definition, nobody who wants to be in charge of mexifornia is a smart candidate.