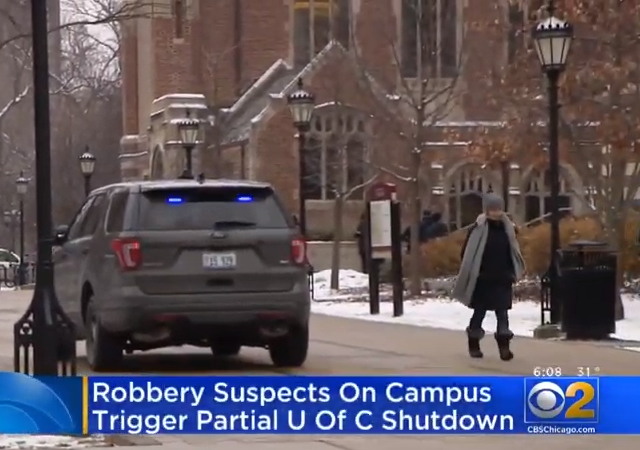 Earlier this week, armed robbers fled the scene of a crime, crashed their getaway car and proceeded on foot to the campus of the University of Chicago. Police temporarily locked down the campus and ultimately arrested all of the suspects.

Here are the details of the crime as reported by The Chicago Maroon:

UChicago told the campus community to stay inside as police canvassed the local area looking for a suspect involved in an armed robbery off-campus. One CPD officer told The Maroon at around 12:15 p.m. that it was safe for students to go outside. Police said they apprehended all five suspects and the University issued an all-clear message at 12:49 p.m.

At around 11:48 a.m., a stolen black Dodge Charger believed to have been involved in the robbery of a GameStop ran a red light on the intersection of Midway Plaisance and South Woodlawn Avenue, supposedly while chased by police. In the process, it ran into two additional cars, damaging both significantly. The driver of one of the vehicles escaped without injury but the status of the other driver is unknown.

The suspects fled their Dodge Charger, and police pursued. One of the suspects was arrested immediately after the crash, according to an e-mail sent by the University after the events at around 4:25 p.m. Around 30 police officers cornered multiple suspects in the Saieh Hall of Economics, though it is unclear whether all the remaining suspects fled inside the building.

The suspects in Saieh were later apprehended at around 12:40 p.m. Police on scene said no one was hurt inside Saieh and there was no substantial property damage.

Here’s a brief video report from CBS News in Chicago:

No one was hurt and the cops caught the bad guys. Everyone should be happy, right? Nope. Some students at the school are calling for the police to be disarmed.

U of Chicago Students Outraged After Robbery Suspects Arrested On Campus

As the father of a high-school senior, I get concerned about his future. After all, he’ll be starting college in the fall, and I worry about the nonsense he’s likely to encounter while at school. If he could pursue his dreams without college, at this point I’d probably encourage him to do so, but he can’t. That means he has to put up with whatever degree of crazy he has to.

However, after seeing this, I’m glad the University of Chicago isn’t on his list of preferred schools.

On Monday, Chicago police apprehended several suspects involved in an armed robbery who had fled from officers onto the University of Chicago’s campus.

The crisis, which prompted an alert from the university urging the campus community to shelter in place, also prompted some students to go into hysterics on social media.

They weren’t worried about the dangers of gun violence—no, they were furious at police.

From calling them “pigs” to demanding their disarmament, some students expressed fury at both the Chicago and University of Chicago police forces, who had come to protect and serve…

What’s more, even though no students were harmed and the suspects were arrested without a single shot being fired, some students began calling for the abolition of police.

“there were militarized cops (literally carrying assault rifles) crawling all over campus looking for armed, african-american men. a black student could’ve worn a striped shirt (like one of the robbers)… reached for a phone at the wrong time… etc. and could have been shot,” one student tweeted. “Anywho … disarm/abolish the police.

What do you want to bet that they were fine with the way Roger Stone was picked up?

Disarm Law Enforcement, then the bad guys will be able to rule. What could go wrong? This is what happens when the natural constituent of the Dems/Progs get their way.

All this on the first anniversary of the Parkland School Shooting — where police the Sheriff was removed by Governor DeSantis for an inadequate police response.

I say let them deal with it without any police protection, including the university’s

Now that would be worth the price of admission

It’s probably a few militant black and too rich students who want to be “cool”, my guess is the vast majority didn’t feel this way.
University of Chicago, if I remember well, is one of the few colleges that said, if your looking for safe places, this is not the college for you. No snowflakes wanted.
This despite its very Left leanings

Yep, next time someone is in danger on that campus let them call the hippies.
Sad how far this country has fallen.

Remember, these kids are of voting age……

They are being educated…I mean trained….. I mean indoctrinated well. Besides instantaneously making this about the “pigs” and their “militarized” presence, they also found a way to make it a race issue. That scores bonus points.

U Chicago has over six thousand undergrads. In even the best scenario, some small percentage of those are going to be absolute fruitcakes.

I imagine a bunch of these comments were made before the students had any idea of what was happening.

And most likely *after* the students in question had spotted the incoming police and made an emergency bathroom trip to flush a few hundred dollars worth of weed.

“What do you mean they was after some brother who robbed a bank? Man, you mean I flushed a whole baggie for nothing!”

You think there could have been an emergency so great requiring the police response without a campus wide alert? I bet there was a shelter in place call or something like it.

Lunatics from sea to shining sea.

So called “Higher Education” isn’t what it used to be, by deliberate design.

A “thank you” would have sufficed….staying silent would have been acceptable if you don’t like the militarization of the police….but to openly call for the police to be disarmed? Jeez….this is truly bizarro world. These are the same people that don’t think citizens should have guns because we can call the police…..and in their world, we would be calling the unarmed police to deal with criminals that are armed and have just invaded our homes.

Someone help me understand this. How is this type of thinking not a mental illness?

Give the police the iconic “rape whistles” so that when they’re chasing down an armed suspect they can shout out:

Halt! Halt, I say, or I shall be forced to toot!

(Unashamedly borrowed from a decades-old comedian’s sketch referring to London Bobbies who, at the time, were only armed with their police whistles.)

You can bet that those who dislike police are either criminals or closely associated with criminals. Furthermore, this being Chicago, a very high percentage of those students will be from a groups well known to commit crime at more than seven fold what is average.