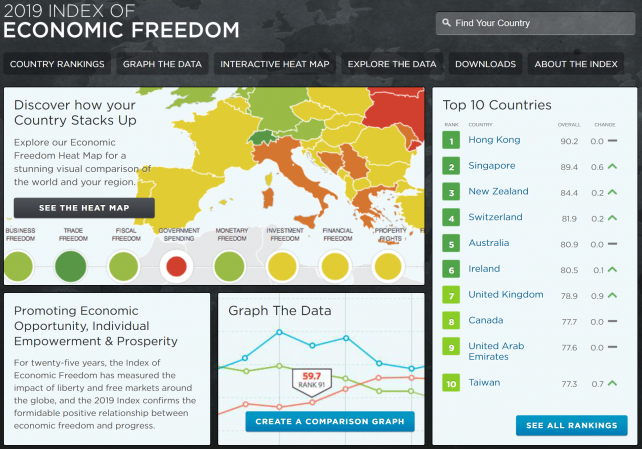 On Friday at the Heritage Foundation in Washington, DC, I attended the release event of their 2019 Index of Economic Freedom. Heritage, the nation’s preeminent conservative think tank, has been publishing its Index for 25 years.

The authors surveyed 180 countries, looking at things like tax burden, property rights, trade freedom, and regulatory efficiency.  They then assigned a score from 0-100. The average score is 60.8, which they say is the third-highest level in the 25 years of making their Index.

It’s probably easy to guess the bottom three, and very timely in the midst of the economic turmoil and widespread citizen revolt in Maduro’s Venezuela. It’s also a continued stinging rebuke to the Bernie Sanders’ and Alexandria Ocasio-Cortez’s of the world who peddle their sanitized version of socialism; the “Socialism WILL work if you just do it THIS way” crowd. Sadly, I don’t think the Heritage Index will sway their “Democratic Socialist” minds.

The top ten are as follows:

The United States just missed the top ten, coming in 12th with a score of 76.8.  This is up six places from 2018, and every speaker at the release event credited President Trump with the increase.  They noted the nation’s low unemployment rate and the Administration’s dialing back and the outright elimination of regulatory burdens. They reminded the audience that when governments do less, companies do more, and that there’s no economic challenge that can’t be solved with free market solutions. 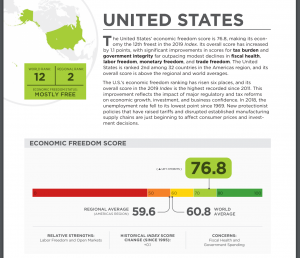 Some of the main findings in the Index include:

The Index is an easy and fascinating read, filled with colorful charts and graphics. It also has a “Background” section on each of the countries, reminiscent of the World Almanac.  I learned things like that in April of last year, Swaziland was renamed Eswatini, there is a country also in Africa called Comoros, and Kazakhstan is the largest producer of uranium in the world.

To read the 2019 Index of Economic Freedom, download it free here.

The webcast of the release event is below:

Trump helped us be more free? No wonder they hate him so much!

And he lowered the cost!

notamemberofanyorganizedpolicital in reply to TheFineReport.com. | January 29, 2019 at 11:07 pm

In that case they probably don’t know how blessed they are still then.

What are you talking about? NZ, Australia, Ireland, The UK, and Canada all have plentiful supplies of 0bamas, Waterses, Cortezes, Clintons, Lees, Johnsons, Sharptons, and assorted millenial idiots, in fact more per capita than the US has. Their academies, news media, and commentariats are lousy with them, and their legislatures have full measure too. Just look at who’s running NZ, Ireland, and Canada; and even May and Morrison, who are reasonably good by the standards of their countries, would be moderate Democrats by US standards.

And yet their economies haven’t been stifled by class theft schemes and other dirty socialist tricks.

The EU is introducing tax legislation to centralised taxation powers so that countries like Ireland can’t do their own thing (ie have lower corporate taxes than other EU countries).

So Ireland’s time in the too 19 May be limited.

That should have been “in the top 10”!! Far fingers, small keyboard!!

Is freedom of speech included in the calculation?

Dear Legal Insurrection,
We are trying to keep this quiet! How can we achieve this with you blabbing about it? Now be good boys and girls (or whatever pronoun you prefer) and take this down.

I find it very hard to believe the UK has more economic freedom than the US. But nevertheless, Trump has made good progress in undoing much of the harm Obama inflicted on the economy. There’s still much work to be done.