Sorry, Elizabeth Warren. Looks like Harris is the chosen one. 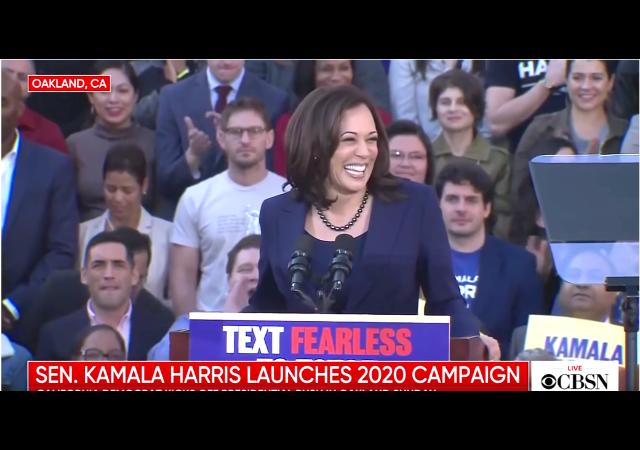 On January 21, Sen. Kamala Harris (D-CA) went on GMA and announced her intention to run for president in 2020.

Harris officially launched her presidential campaign this past weekend in Oakland, CA, in front of an adoring media, which may spell trouble for Sen. Elizabeth Warren (D-MA).

In front of the crowd, Harris declared that she will fight to provide Medicare for all, universal pre-kindergarten education, and middle class tax cuts. She also promised to fight for racial justice and women’s rights.

Harris described President Donald Trump’s wall as a “medieval vanity project.” She said, “When we have children in cages crying for their mothers and fathers, don’t you dare call that border security. That’s a human rights abuse. And that’s not our America.” I noticed she did not mention that also happened under President Barack Obama probably because NARRATIVE!

When the applause calmed, Harris ran down some of her differences with the current administration, including foreign policy and its stance on climate change – “We’re going to act based on science fact, not science fiction’’ – and she mentioned a number of issues she would address as president.

Among them are the disparity in wages for the same work between men and women – especially steep for women of color – the uneven application of justice in the legal system and the need to secure future elections against foreign interference.

Harris, the first senator to co-sponsor Vermont Sen. Bernie Sanders’ 2017 legislation calling for Medicare for all, got one of her biggest ovations of the day when she reiterated her support for that measure while calling health care a fundamental right.

And she drew another long round of applause when she culminated her remarks by saying, “With faith in God, with fidelity to country and with the fighting spirit I got from my mother, I stand before you today to announce my candidacy for president of the United States.”

Science based so I guess she will admit that life does begin at conception and that abortion is the murder of unborn human beings? Has Harris found the ability to tell Mother Nature to stop naturally warming?

Harris spit out the usual rhetoric used by Democrats to rile up the left like “the American Dream and our American democracy are under attack and on the line like never before” and that we don’t live in “ordinary times, and this will not be an ordinary election.”

Last I checked we live in a republic while citizens still have the ability to roam freely and speak their minds as they wish. You know, unlike the man hanged in Iran because he was the gay or the 20+ people killed during Mass in the Philippines.

Is Harris the candidate the DNC wants? The crowd in Oakland outnumbered the crowd at Obama’s presidential announcement.

I’ve had an instinct about @KamalaHarris since I first laid eyes on her. It was an instinct that grew over time. But today, in her 1st official speech in Oakland, my devotion is unequivocal! She is what we have been waiting for. And I am all in!

Former San Francisco Mayor Willie Brown used his column in The San Francisco Chronicle to admit to he dated Harris more than 20 years ago. He hinted that he “may have influenced her career by appointing her to two state commissions when I was Assembly speaker.”

As a way to defuse the situation, Brown pointed out that he “also helped the careers of House Speaker Nancy Pelosi, Gov. Gavin Newsom, Sen. Dianne Feinstein and a host of other politicians.”

Brown said that out of everyone, only Harris notified him that she would indict him if he “so much as jaywalked” while she served as district attorney.

I guess Brown decided to do this to get the situation out of the open now before one of Harris’s opponents could use it against her. Brown has a history of being a womanizer and charmer.

I am incredibly unexcited about her candidacy. She gives me the Willies. /s

Star graduate of the Eddie Murphy/Velvet Jones School for Hos,

Ahhhh, the days when SNL was actually funny.

notamemberofanyorganizedpolicital in reply to Massinsanity. | January 28, 2019 at 2:14 pm

“…..Senator Kamala Harris began her political career by sleeping with San Francisco Mayor Willie Brown in exchange for him promoting her to political offices and enlisting donor support for her career objectives….”

So, where is Harris sleeping now and for what…….

What is the difference between Kamala and Stormy?

Stormy only did it once.

She’s a BLACK woman and a Democrat–that’s a triple.

If only she were an illegal alien that would make a home run.

She gives me “the willies” as well but because I think she can win. I would love it they ran an old white guy like Biden or Sanders or even and old white woman like Clinton or Warren. Harris just strikes me as the right blend of youth and experience and a woman of color… I think the base will love her and she is quite the contrast to Trump and I think that will appeal to a lot of the voters in the middle.

so healthcare is a fundamental ” right? “–more ” free shyte ” pandering–so who exactly is the one promoting ” science fiction? “–more like ” fiscal fiction.”

Used sex to get to get power in California. “IF” (she won’t be) elected president, she’s going to screw every American citizen, that I can tell you. Sad.

Now..now… she was just a working girl making her way up the social/political ladder as an “understudy” of Willie Brown. I think her campaign song or one to play against her would be the Donna Summer song “She Works Hard for the Money.” Very fitting.

I didn’t realize Willie was banging Pelosi and Newsom too… no accounting for taste.

All those long, hard, lessons under Willie and his friends, putting her best efforts into many positions and making sure all openings were filled.

after obama suspect electorate less enthralled to elect a one term black senator loved by the media.
really hope she starts voting present a lot more often….
so….bring it on.

I hope you are right–but the voting public’s ability to do stupid things seems rather expansive.

Please ignore my down vote. I blame a fat finger and sangria.

The “Willie Brown’s Mattress” memes are already making the rounds. I don’t know if his support is going to help her all that much this time.

I suggest Kamala “Brown’s Sugar” Harris as her new nic.

Another dangerous ditz with a fist full of race cards.

I’m appalled that she thinks it’s acceptable to SLEEP her way to the top. Her melodramatic and anticlimatic questioning of Kavanaugh (“I remind you you’re under oath…”) showed there’s no beef there, just show.

Trump paid women to be quiet. She used sex to get ahead. Can’t do that with foreign governments, as far as I know. She would never be able to match Trump’s ability to identify faulty trade deals and negotiate better ones.

The dems hate our workers, but will use emotion to get their self-destructive vctes.

Given her voice, she sounds more like brown Hillary than female Obama.

Don’t say I didn’t warn you all that Harris would be worse than Bans Boxer ever was.

What is truly laughable is that even though she is in the Senate I guarantee you that not one piece of legislation will be introduced to provide healthcare for all or tac cuts for all over the course if the next 2 years by mattress girl or the Democrats.

“In front of the crowd, Harris declared that she will fight to provide Medicare for all, universal pre-kindergarten education, and middle class tax cuts. She also promised to fight for racial justice and women’s rights.”

She could be doing this now in her present position.

What legislation has she introduced to achieve these results?

Speaking of racial justice, how putting Blacks back to work? Obama didn’t do it but Trump did. She wants to change that?

Thus begins the campaign to sleep her way all the way to the top.

The MSM will ignore her um “questionable relationships” and focus on how awesome and wonderful she is.

speaking of long lines, here’s a palate cleanser update to Fuzzy Slipper’s weekend poast about the veteran’s funeral in Texas:

Don’t underestimate her ability to rise above the noise level of tens of other Dem candidates and to be a serious contender for the Oval Office. The most recent elections in traditionally red states proves that money and pop culture are slowly but surely influencing elections. While Ted Cruz may be excused as an imperfect or flawed candidate, his counterpart who was an empty vessel of leftist tropes still gave him a huge challenge. And the 2 bellweather elections for me were the governorships in FL and GA. In GA, Abrams was taking hard left positions, hid very little, and received a ton of votes thanks to outside money. It’s still proof that money worked.

Harris very well could be the next Pres and her candidacy should be taken seriously.

And not just from the left nor just Dem candidates either!! Folks with impeccable character like Max Boot are probably goin’ to amp up their preachin’ too! You know, the TRUE and HONORABLE conservatives out there. (my sarc contribution)

I don’t know how viable she is, but she’s already locked up Rush Limbaugh’s vote. He spent his show today raving about her.

We need this walking wart in a skirt like we need hillary clinton.

If Krazy Kamela is good for something, it’s good for willie browns. Get in line.

TSK. All the sexual innuendo. I wouldn’t dream of saying some of the things I’ve read here about this nice young woman of color.

She’s in trouble because even Politico teases:

No matter who runs on the D ticket … no matter how good they themselves and their ideas are … the main question is can they survive a battle in the gutter against Trump.