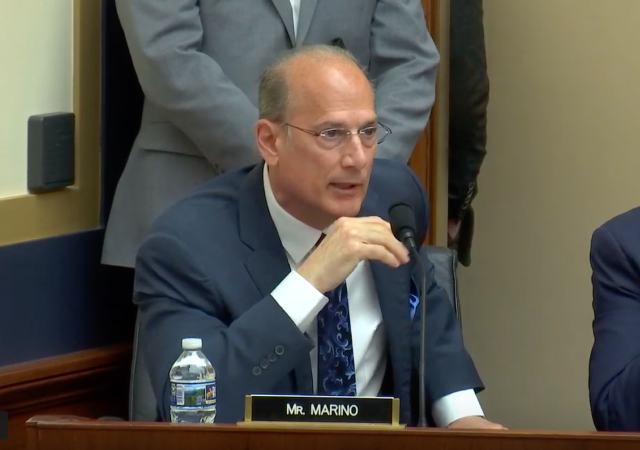 Rep. Tom Marino (R-PA) has announced he will retire from Congress for a job in the private sector. From The Daily Intern:

Tom Marino, who just began his fifth term in the U.S. Congress, has announced his resignation effective Jan. 23.

Marino, who won election to the newly formed 12th House District in November, said he is taking a job in the private sector.

“Having spent over two decades serving the public, I have chosen to take a position in the private sector where I can use both my legal and business experience to create jobs around the nation,” Marino said. “I want to thank the people of the 12th Congressional District of Pennsylvania for the faith they have placed in me to represent them in Congress. It truly has been one of the greatest honors of my life.”

I wonder who’s threatening him?

He’s kinda’ cheating the people who elected him, isn’t he?

You wouldn’t say that if he were leaving for some other elected office, or if the President had appointed him to something. Mike Pompeo, for instance, resigned from the House on Jan 23 two years ago, having just begun his 4th term 20 days earlier; would anyone say that he cheated the people who elected him? So why is a private sector job different? Why is a government job considered noble, while a job being productive, creating wealth rather than consuming it, is disdained as “selfish” and “unworthy”, so that such questions are asked?

Private vs public isn’t the issue. He wins the seat and then delivers it to whoever Pennsylvania’s Democrat governor appoints, presumably a Democrat. He goes private and betrays his party in the process. He cannot reasonably claim this wasn’t the intended result. An awesomely NeverTrump sort of move.

WTH are you talking about? The governor can’t appoint anyone. There will be a special election and the voters will decide whom they want to represent them.