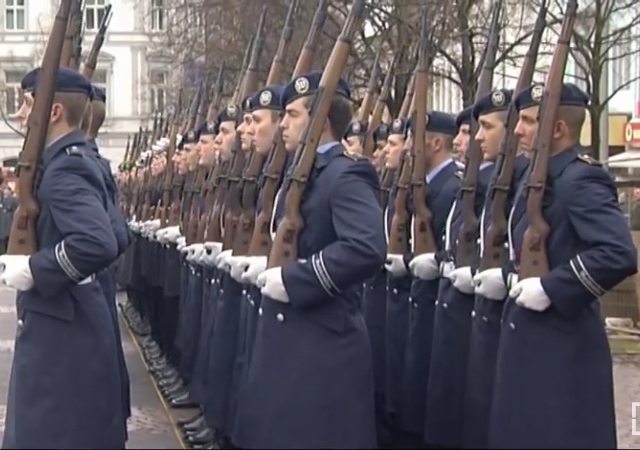 German army has caught an Iranian spy working in its ranks. A 50-year-old German-Afghan man has been arrested on charges of spying for Iran’s Ministry of Intelligence (MOIS). The man, named by the state prosecutor as Abdul Hamid S., has been passing on sensitive military intelligence to the Iranian spy agency for many years, the local newspaper reports said.

This in not an isolated case of its kind. “The Federal Prosecutor is presently investigating several espionage cases involving Iranian spy service, German newspaper Abendblatt reported citing official sources. In addition to that, some 950 member of the Iran-sponsored Hezbollah terror militia are also operating in the country, a 2018 report published by the German intelligence agency shows.

Chancellor Angela Merkel’s government, otherwise vocal against Hungary or Poland for defying EU dictates, issued a meekly worded response to the Mullah regime. The German Foreign Ministry has “spoken to the Iranian representative in unequivocal terms and expressed [its] great concern over the alleged spy activity,” the official communique said.

A 50-year-old Afghan-German man has been arrested for spying on the Bundeswehr on behalf of the Iranian intelligence service. The man names Abdul Hamid S. was reportedly detained in the Rhineland [region]. The arrest warrant was issued on December 6.

The Chief Federal Prosecutor Peter Frank accused Abdul Hamid S. of working as a foreign agent under the Paragraph 99 of the German Criminal Code. “The accused was a language analyst and regional consultant for the Bundeswehr,” the agency (Federal Prosecutor’s office) in the city of Karlsruhe said. “In this capacity, he has been passing information to the Iranian spy service.”

According to a report in the weekly Der Spiegel, the intelligence agency in question is the Iranian Ministry of Intelligence and Security (MOIS). Abdul Hamid S., a native of Afghanistan has allegedly been working for many years for Iran.

The German Office for the Protection of the Constitution [domestic intelligence service], the agency responsible for counterintelligence, sees Iran as one of its main priorities, In 2016, the Court of Appeal in Berlin sentenced a 32-year-old Iranian man on espionage charges. He was accused of gathering information on Iranian opposition groups for the MOIS. As customary in such cases, the man was deported back to Iran after completing the prison term in February 2018. In March 2017, a Pakistani man was sentenced for spying on the president of the German-Israeli Association (DIG). [Translated from German by the author]

According to the information released last week by the Dutch government, Iran has been behind four terror plots on European soil since 2015.

These devastating revelations come at a time when Chancellor Merkel’s government is spearheading the plan to set up a non-dollar trading mechanism to protect European companies and banks from U.S. sanctions for doing business in Iran.

“I am hopeful that we will be able to finalize the payment channel in the coming weeks,” German Foreign Minister Heiko Maas told Der Spiegel last week. “We are working urgently to clarify the final requirements — such as determining the country where the mechanism will be headquartered. That isn’t easy in a confrontative situation with the U.S. because it is, of course, trying to exert pressure.”

Iran is also running an elaborate industrial espionage operation in Germany. Iranian agents are targeting German tech companies to boost its weapons of mass destruction (WMD) program. Iran has been seeking missile guidance technology and electronics for its nuclear weapons delivery system, intelligence agency for the southern German state of Baden-Württemberg disclosed in June 2018. Other German intelligence agencies have made similar assessments as well.

By spying on country’s defense and industrial sectors, the Iranian regime is revealing its hostile intentions towards Germany and the West. Refusing to smell the coffee, Berlin is busy pulling all the diplomatic stops to shield this tyrannical Islamic regime from US sanctions and avert its impeding bankruptcy.

Mike Pompeo: Want Iranian people to be able to control of their leadership

They have Merkel in charge. Who needs a spy?

So, what’s he been telling Iran? That the Germans are equipped with the very latest 1898 rifles?

Good eyes for catching the 98K’s. Germany must be returning to a kindler-gentler time without G3’s and G36’s…those terrible assault rifles.. ..

How “shocking” that after working so hard to help Iran, Germany finds out it hasn’t helped enough to prevent the “need” for Iran to spy on Germany. Gee… who’da thunk?

Germany is worse than domesticated turkeys… at least the turkeys will look up to see where the rain is coming from that drowns them.

US military ceremonial and drill organizations still use the M1 Garand.

The Germans have fielded one of the best modern tanks on with world scene. They may not have enough of them, but that’s a different question…

Much easier to handle and well balanced for drill ceremony. Most plastic stocked weapons are harder to handle and not heavy enough for rifle drill performances. The 98ks are perfect for the job.

Another reason to destroy all of Iran’s water and hydroelectric reservoirs. They are easy pickings.

well, color me surprised and hang me on the wall.

Everybody spies on everybody they can, including allies.

Why prosecute him when Sen. Feinstein will be happy to hire him to work as a community relations staffer/driver in her San Francisco office? She has no problem hiring spies for her staff positions!

I would bet Germany has a lot of Muslim spies in its military, they just don’t have formal ties to a foreign intelligence service. Deliver the intel through mosque and “charity” networks that deserve a lot more scrutiny than they now get.

What the hell are they doing with those old WWI bolt action rifles?? What have they done with all our military aid.