Eric Drouet, a “Yellow Vest” leader, was detained by police. 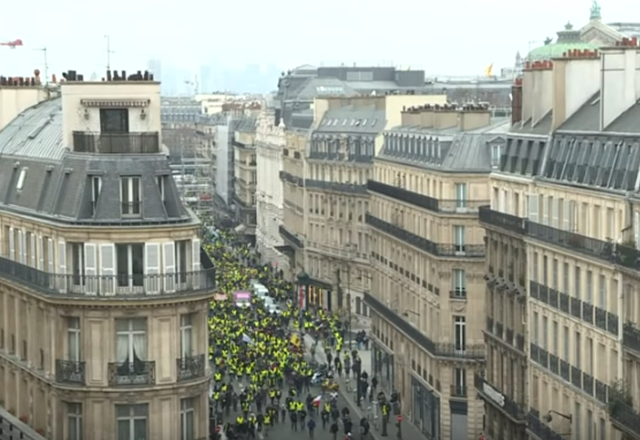 The “Yellow Vest” citizen demonstrations are continuing in Paris, a French ministry building was broken into, and a government spokesman was evacuated from his office.

Benjamin Griveaux said he and his team had had to escape through a back door after a construction vehicle was used to ram the building’s entrance.

There were clashes between police and protesters on what was the first protest of the new year.

What began as a protest about a fuel tax back in November has escalated into widespread anger at rising living costs.

There is still no indication that the protesters are clamoring for more climate change regulations.

The latest “Yellow Vest” marches began peacefully enough. However, it devolved into violence and chaos.

Officers fired tear gas to prevent protesters crossing the river and reaching the National Assembly. One riverboat restaurant was set ablaze and a policeman was wounded when he was hit by a bicycle hurled from a street above the river bank.

Two months after they started blocking roads, occupying highway tollbooths and staging sometimes-violent street protests in Paris, the yellow vests wanted to inject new momentum into a movement that weakened over the holidays.

Macron’s government, shaken by the unrest, had this week hardened its stance, branding the protesters agitators seeking to overthrow the government.

One of the leaders of the “yellow vest” demonstrations was detained by police.

Eric Drouet – who already faces a trial for carrying a weapon at a previous protest – was held while heading for the Champs-Elysees, which has been the scene of violent clashes over the last month.

…A few dozen demonstrators had gathered outside a McDonald’s restaurant near France’s famous Arc de Triomphe war monument and had been waiting for Drouet to arrive early Wednesday evening.

Drouet, a truck driver who appears on television as a spokesman for the “yellow vests”, had called for the demonstration in a video posted on his Facebook page.

Police in #France have arrested a leader of the “Yellow Vest” anti-government movement for organizing an undeclared protest in central #Paris.

According to a police source, Eric #Drouet was detained while heading to the Champs-Elysees, the site of the recent protests. pic.twitter.com/gke7rLvxsr

I will simply point out that the American media is covering the use of tear gas on the protesters without making it seem like the French police were villains.

The first Yellow Vest protest of the year in France is marked by an assault on a Paris ministry building, leading a government minister to be evacuated through a back door https://t.co/INAAvGl1tm

“I will simply point out that the American media is covering the use of tear gas on the protesters without making it seem like the French police were villains.”

Of course….tear gas is being used for the “proper” reasons, unilke drving illegals back from trying to cross the boarder….

The French do not sit down to tea parties. That must be an Anglo-Saxon thing that is exemplified within our national charter, “Prudence, indeed…”

I would love to do a yellow vest protest in DC. Off with their heads could be the slogan. It would definitely show some solidarity with the middle class in EU.

Now, according to this Eric Drouet, he was trying to head to place candles to honor the dead/ wounded protesters with about 20 of his fellows when he was arrested for this “illegal demonstration”. Cue French ministers publicly gloating about his having broken the rules. Yes, it made for a peaceful arrest, but the circumstances could not have been more agreeable to Drouet.

Macron is determined to pour gas on the fire and ‘defeat’ the protests in a way that makes him look manly again. This Drouet makes at least one opponent ready to bait Macron into looking even more like a dictator. I wonder how it will end. Macron shouldn’t be making it look this close.

Here is some information I wish I had last night while preparing this post:

– At the time President Macron was speaking, one of his emissaries was in Morocco to sign the UN Global Compact for Safe, Orderly and Regular Migration, which defines immigration as “beneficial” for the host countries. Under it, signatory states pledge to “strengthen migrant-inclusive service delivery systems.”

– A group of retired generals published an open letter, saying that signing the Global Compact was a further step towards “the abandonment of national sovereignty” and noted that “80% of the French population think that immigration must be halted or regulated drastically”. “In deciding alone to sign this pact,” the generals wrote, “… You are guilty of a denial of democracy, even TREASON, with respect the nation”.

Ah yes I actually stumbled over that this afternoon. I’m surprised I haven’t heard of Macron firing current generals. That’s a common move during times like these.

I also heard some “spokesman” for Yellow Vests denying they were pushing for Macron to resign or other things that would plunge France into chaos. That’s not notable because I believe him – I’d heard very credibly reported that many want just that, and radical popular democracy measures, rolling back of “tax breaks for the rich” and so forth. Rather, what’s notable is that they’re trying to sound reasonable to the masses as a strategy.

As long as Macron sounds like an unapologetic, out of touch king, that strategy just might work…