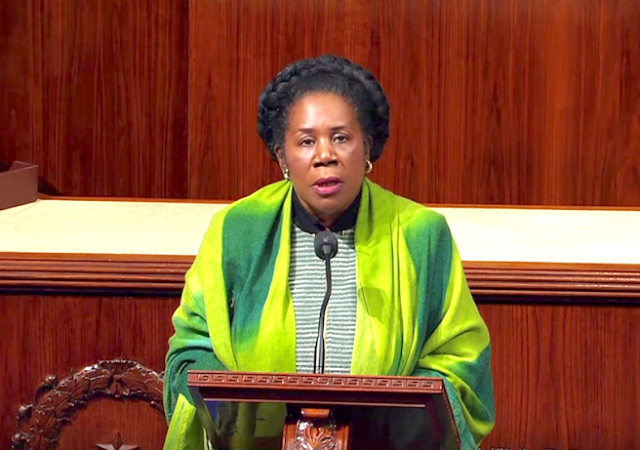 Believe all women, right? Isn’t that what the left has been saying since the #MeToo movement began?

Rep. Sheila Jackson Lee (D-TX) faces a lawsuit from a former staffer who claimed the congresswoman fired her after she said a former employee of the Congressional Black Caucus Foundation (CBCF) raped her in 2015.

The woman, identified in court papers by the pseudonym Jane Doe, alleges she was raped in October 2015, when she was a 19-year-old intern for the CBCF, by the foundation’s intern coordinator at the time, Damien Jones. The woman said she reported the alleged rape to police and told several people, including Rep. Terri Sewell, her former boss and a distant relative of her mother’s, but did not pursue legal action at the time.

Several years later, when Jane Doe was working for Jackson Lee, the woman decided she did want to pursue legal action, and told Jackson Lee’s chief of staff Glenn Rushing in early March 2018. The woman alleges that she asked to speak with Jackson Lee about it, but a meeting never happened, and several weeks later she was fired. Jackson Lee is chair of the board for the CBCF.

Jones did not return requests for comment. After leaving the CBCF in late 2015, he continued to work in Democratic politics and recently served as the regional political director for former representative Beto O’Rourke’s Senate campaign. Chris Evans, a spokesperson for the O’Rourke campaign, said in an email to BuzzFeed News, “The Beto for Texas campaign was absolutely not aware of these allegations until today and no longer has a relationship with Damien Jones.”

Rushing told BuzzFeed that Jackson Lee’s office “had nothing to do with any of the actions that have been cited and the person was not wrongfully terminated.”

The complaint detailed what happened to Doe:

According to the complaint, on Oct. 24, 2015, Jones invited Jane Doe to dinner, where she said he ordered a large quantity of drinks. She said that he then took her back to his home, poured more drinks, and that her memory became foggy about the rest of the night. She said she sent a series of text messages to a friend that night, including, “Help,” “I’m want t[sic] to go home,” and “I’m ready to cry,” and told the friend she was with the intern coordinator but did not know where she was.

The woman said she remembered Jones engaging in sexual activity with her, including forcing her to perform oral sex. In the complaint, she said she did not consent to any sexual activity. The next morning, she said she woke up naked in Jones’ bed “with his arms and legs around her,” and left. She said she experienced pain in her vagina and elsewhere on her body.

Jane Doe said later that day she texted Jones to ask what happened, and he replied, “Nothing. You threw up everywhere. That’s it.” When she asked why she was naked, he told her to call him. Jane Doe says that he told her that he took off her clothes and put her in the shower, and he denied they had sex.

Jane Doe said she went to a hospital and had a sexual assault exam. She later reported the alleged assault to the Metropolitan Police Department in DC — the lawsuit does not specify when — and, according to the lawsuit, investigators found sperm on the pants she was wearing the night she was with Jones, but couldn’t get a “sufficient DNA profile.” Police got a search warrant for Jones’ DNA and found his DNA on Jane Doe’s breast, and concluded he could not “be excluded” as the source of DNA on her neck, according to the complaint.

The lawsuit does not indicate whether anyone filed criminal charges “against Jones, and there is no record of a criminal case against him in District of Columbia Superior Court.”

Doe claimed that she met with people from the CBCF in November 2015. These people asked Doe for all communications she had with Jones and said they’d put Jones “on leave right away.” Jones left the CBCF in December 2015.

However, the CBCF invited Jones “to appear on a panel at the CBCF’s annual legislative conference in September 2017.”

Doe took a job in Jackson Lee’s office in 2017. She went to Rushing after she heard the congresswoman may hire Jones:

In late 2017, Jane Doe took a job in Jackson Lee’s congressional office. Soon after she was hired, according to the lawsuit, Jane Doe learned that Jones might be hired in Jackson Lee’s office, and she told Rushing that she had a “prior situation” with Jones and would not be comfortable working together. Rushing allegedly told her that he understood and didn’t end up hiring Jones “because he had a situation with CBCF and they could not have him working in the office as a result.”

In early March 2018, Jane Doe told Rushing that she had learned “more about her case involving Mr. Jones and CBCF” and was planning to go forward with legal action, according to the complaint. Jane Doe said she asked to speak with Jackson Lee, and Rushing agreed, but no meeting took place. On March 29, she said she was told she was being fired because of budget issues.

Jane Doe’s lawsuit describes times she said she spent driving Jackson Lee in her personal car she and alleges she was pressured by Jackson Lee and Rushing to get a new car after her car was damaged in an accident. When she was fired, she said that in addition to being told it was because of budget issues, that Rushing also told her, “It didn’t help that you lied about the car.” It was not immediately clear from court filings what that was a reference to.

Jane Doe alleges that the budget-related explanation was a pretext and that Jackson Lee retaliated against her for planning to take action against the CBCF related to the alleged rape.

Barbara Lee, name sake of a Confederate General, skews the bell curve far to the left.

But in this case she claims she reported it to police.

If there’s a police report that backs her up? Wow, dumbass with the plastic cowboy hat is TOAST.

Dumbass with the cowboy hat is Frederica Wilson (D-FL).

They say that there is someone, for everyone. I pity whoever or whatever it is that has to service Sheila. OTOH, she could be a model for what some of those crazed Islams end up with in after-life.

That in and of itself ought to be a detterent. Imagine the surprise: I did what to get this? WTF!!!

She should have named Kavanaugh. They would have believed her then even if the DNA wasn’t a match.

“All women are to be believed”! Wasn’t the “Mars lander” one of the Balsey-Ford backers? It would be very interesting to see who and how much the Congressmen/women have paid secretly for sexual charges from the “Fund”.

When is America’s “electorate”, going to insist on revealing sexual attacks, by politicians, “AND”…..refusing to fund their coverup’s? ? ? ? ? ? { &, prosecuting these actions!}…..When this “guilty” politician, is convicted….there will be “NO”, residual compensation,, pay, ins, medical coverage…..”NOTHING”!

That part sounds like a bit of a stretch.

Democrat politicals are pure scum. Either they steal, they cheat, they molest children (or they protect molestors in return for their money), they betray our country, or they’re just friggin stupid. Or they’re mitt romney.

If there is one legacy of the clintons, it is this quid pro quo: you molest, I protect.

lord–from the photo, she looks to be the dumbest, ugliest thing you could ever put in a shower curtain

Jackson Lee is a moron of the first water but I question why she is being sued. Jane doe alleges she was raped by a man who didn’t work for Jackson Lee. She also alleges she told police as well as a Jackson Lee staffer, not Jackson Lee. Is she suing the police too? The guy who raped her? Is she suing her former boss, Terri Sewell? I’m guessing this gets tossed right out.

She is being sued for the termination. Jane Doe is claiming she was terminated from SJL’s office because she objected to her hiring a former CBCF employee that raped her.

She objected and they didn’t hire him. So what if they terminated her? I thought conservatives generally believed in employment at will.

Your comment was you didn’t understand why SJL was being sued because the man didn’t work for SJL. I did not offer an opinion, I answered your question. She is claiming wrongful termination.

Now if you want my opinion, she apparently went full in for the investigation from where DNA was recovered from her clothing and body. My guess is that someone from the Congressional Black Caucus had a “talk”with her and she was convinced not to press charges. SJL is one of the leaders of the caucus and she was hired to work in her office. The phrase “pay off” pops up in my mind. The alleged rapist comes back into the picture, and while he is not hired, she is terminated shortly after. My guess would be Jane is shooting for a big settlement to keep quiet.

I don’t have a problem with employment at will but I do have a problem with a man in a supervisory position taking a minor (for alcohol consumption) female out, plying her with alcohol and taking advantage. If this is part of protecting the alleged rapist, I say take SJL to the cleaners. Of course the downside is that the taxpayers will be the ones that pay and the congresswoman will walk away unscathed.

Keep in mind that the source, thus far, is BuzzFeed.

Their Cohen-Trump-Perjury story got a splash of cold water this afternoon…. from Team Mueller.