First voter question to Elizabeth Warren in Sioux City: “Why did you undergo the DNA testing?”

First voter question to Elizabeth Warren in Sioux City: “Why did you undergo the DNA testing?” 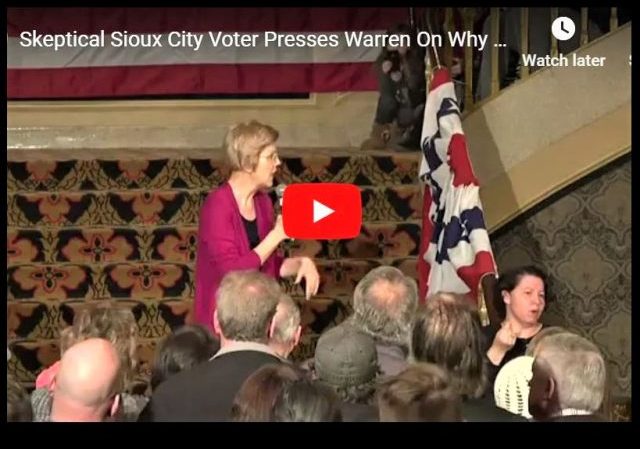 I wrote recently that Elizabeth Warren’s presidential campaign already has been defined by her Native American problem much as emails defined Hillary.

Trump has switched, at least temporarily, from calling her “Pocahontas” to mock her false claim to be Native American to mocking the DNA test results that showed Warren may only be 1/1024th Native American (by DNA, which is not how real Native Americans determine whether someone is a tribal member). 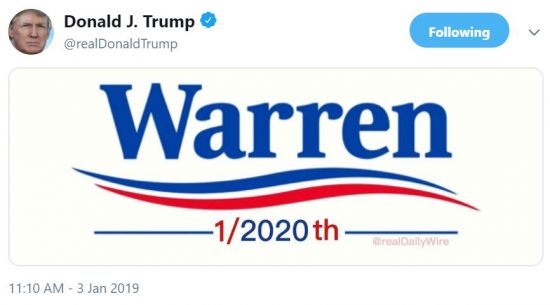 Warren is on a tour of Iowa, and appeared at a rally in Sioux City. As if to prove me right, the very first question asked of Warren by an audience member was about her DNA test.

You will recall that the DNA test, which revealed she may have a single Native American ancestor 6-10 generations ago, has been almost uniformly considered a disaster for Warren.

Dave Weigel of The Washington Post was present, and tweeted: 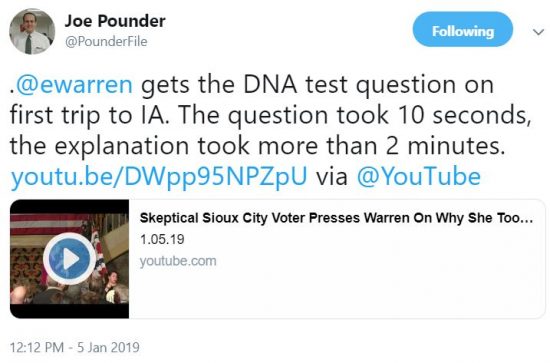 It’s clear the person asking the question was sympathetic to Warren and framed the question in such a way as to accuse Trump of being a bully:

That’s a really long-winded answer to a simple question. The themes Warren hit, particularly that the accusations against her are racist, are part of a clear Warren strategy, something we discussed in the earlier post:

Even as she attempts recover from the DNA rollout disaster, Warren is still trying to deflate the Native American issue in a way Warren supporters, particularly in the media, have tried since 2012: By attacking people who bring it up as racist….

Warren also has a section [of her campaign-related website] devoted to calling people who raise the issue racist….

Warren also tries to parse the wording, with the diversion about whether she is a tribal member. That’s not the issue. She checked the box that said she was Native American when she wasn’t.

When the issue first arose, she didn’t hesitate to claim she was in fact Native American. To the contrary she justified claiming that status based on offensive racial-profiling of Native Americans having high cheekbones:

Warren also claimed she would be the first Native American Senator from Massachusetts:

This issue is not going away, even among Warren supporters.

Those who support her fear the Warren is incapable of responding to Trump’s attacked, and that the issue will be like Hillary’s email scandal, never going away.

Seems like the person who claims to be another race when she’s not is the racist.

People have no idea of the harm this woman has done to Alcoholic Americans. Drinking a beer right in front of us. The audacity of it all. We’re victims, I tell ya, victims. I demand AA for AAs.

Assuming there is some correlation between central American and American Indian, the number 1/1024 is less than the margin of error for the test. That is, 1/1024 = 0. That number is nothing but experimental noise.

They could be a Dodger, Oriole, Giant, Angel, Brave (!), Diamondback, or Cub.

A better question for a Warren supporter to ask (which also goes to the heart of her response) would be, “How could you be so incompetent as to actually decide to share those pathetic results?”

Another better question: “Are you ashamed of being white?”

Even better question is to ask if she’s going to share 90% of her WEALTH with the poor. Not her salary, her total wealth.

The themes Warren hit, particularly that the accusations against her are racist, are part of a clear Warren strategy

Well, yes, but it’s the standard strategy adopted by a leftoid who has nothing more substantial—accuse everyone in sight of racism. It’s pretty tired by now, but it may fool somebody who wants to be fooled. Which means that she’s not only a fake, but she has trouble coming up with decent ideas. That may end when she gets a competent “handler”—she doesn’t seem to have one at present.

She’s gonna bank a bunch of money, and set herself up for a early bow out, but with favors or chits garnered first. She has no chance. None of them do in 2020. Getting the new deck set since the Clinton machine has been mortally wounded. 2024 will be the battle ROYAL for the Dems. Ought to be fun.

Republicans brought up her claims of Native American ethnicity precisely because it appeared she had lied for employment purposes. Why not bring that up?

not appeared. She checked a box. Then Harvard or whoever made a VERY big deal about their minority hire! And she didn’t say anything. It was appropriation bigtime, and that the left sat on their hands on it is very telling.

Are you, in fact, subscribed to Pewdiepie?

She’s gonna flame out before the first debate

Does she have one of Hillarys people running her campaign and sabotaging it?

Here’s a Twitchy page on a video she shares of the people at her rally, showing the same dozen or so people waiting in line, in a high speed loop to make the numbers appear more than they are

(disclaimer…don’t watch if you are Kurt Eichenwald)

I guess a racist is whomever a liberal accuses.

Imagine a retired black American alcoholic in treatment, who benefitted from Affirmative-Action while in college. An AA AA AA AARP-member (an Alcoholics-Anonymous Affirmative-Action African-American American-Association-of-Retired-Persons-member).

There was nothing random about the person selected or the question that was asked.

There is nothing random or spontaneous about anything Elizabeth Warren does or says, and that includes bathroom breaks.

This is not a questions of others’ racism: it is her dishonest appropriation of an advantage set aside for others.

Did anyone see her latest video: she’s crapping in the woods while drinking a beer.

Crapping in the woods? Is she now claiming to be part Ursus americanus?

Ursus americanus’ crap in the woods.

Fauxcahontas has crapped on our flag.

You could stop lying about it and admit that you used it to get a job!

Wait, wait wait…. Let me make sure I’ve got this straight:

Warren is on a tour of Iowa, and appeared at a rally in Sioux City. As if to prove me right, the very first question asked of Warren by an audience member was about her DNA test.

Sen. Warren, on her FIRST potential campaign appearance, went to SIOUX CITY, Iowa, and the VERY FIRST question was about her DNA test, that explicitly showing she was not “Native American” after all her years claiming that she was an Indian because of her “high cheekbones and family lore.”

The Comedy is WRITING ITSELF at this point.

She then had this to say:

“I am not a person of color,” the Massachusetts Democrat said. “I am not a citizen of a tribe. Tribal citizenship is very different from ancestry. Tribes — and only tribes — determine tribal citizenship, and I respect that difference.”

Um, COME ON!!!! This should be the opening to EVERY SINGLE ANTI-WARREN campaign commercial for the next two years! A picture of Sen. Warren, with her audio stating “I am not a person of color.” WE NOTICED that you’re as white as they come, lady.

Further, that makes it clear as mud, Senator Warren. What you NEEDED to say was:

“Hi, my name is Elizabeth Warren, and I’m a Senator from Boston. I’m white, privileged and rich, but I think that I can run the nation better than President Trump. I thought I had Native American ancestry, and that was enough to claim Native American Status, and I was wrong.”