“Because engaging in a boycott of Israel, as defined by Act 710, is neither speech nor inherently expressive conduct, it is not protected by the First Amendment.” 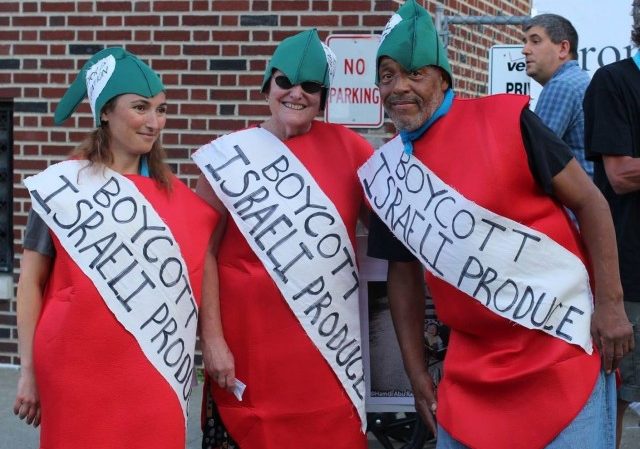 The U.S. has had a federal anti-Boycott law on the books since the 1970s, to counter the Arab League Boycott of Israel.

There is under consideration in Congress, and many states have passed, laws to modernize the anti-Boycott laws to take into account the new form of the boycott, the so-called Boycott, Divestment and Sanctions movement. As I have proven, BDS is a new form not only of the anti-Jewish boycotts of the 1920s and 1930s, but also of the Arab League Boycott, The REAL history of the BDS movement.

A decision in Arkansas upholding Arkansas’s anti-BDS law is a case in point.

The Arkansas Times Limited Partnership, the company that owns and publishes the Arkansas Times, is challenging in federal court a state law that requires government contractors to pledge not to boycott Israel or reduce their fees by at least 20 percent.

The Times initiated the suit after the University of Arkansas-Pulaski Technical College, which has advertised regularly in the Times and its sister publications, informed the Times that it had to sign a certification that it would not engage in a boycott of Israel if it wanted to continue to receive advertising contracts from the University of Arkansas Board of Trustees on behalf of UAPTC. The university imposed this condition because Act 710 requires all state institutions to do so. Timespublisher Alan Leveritt declined, and UAPTC has refused to advertise further with the Times. The Times has never participated in a boycott of Israel or editorialized in support of one.

You can read the Brief in Opposition to the Preliminary Injunction and Brief in Support of Motion to Dismiss filed by Arkansas, setting for the arguments that the  anti-BDS law was constitutional.

Chief Judge Brian S. Miller in the Eastern District of Arkansas just threw out the lawsuit in an opinion which concluded that the law was not as the Judge initially expected it would be.  The Order (pdf.) is embedded at the bottom of this post.

The Judge’s opening paragraph was instructive of why we shouldn’t accept the common wisdom:

I routinely instruct jurors to follow my instructions on the law, even if they thought the law was different or think it should be different. This case presents an occasion in which I must follow the same principle, which is that I have a duty to follow the law even though, before researching the issue, I thought the law required a different outcome than the one ultimately reached.

The Judge noted that there are many similar laws:

Here’s the heart of the Judge’s legal analysis upholding the law:

The Times is unlikely to prevail on the merits of its First Amendment claims because it has not demonstrated that a boycott of Israel, as defined by Act 710, is protected by the First Amendment. This finding diverges from decisions recently reached by two other federal district courts. Jordahl, 336 F. Supp. 3d at 1016; Koontz v. Watson, 283 F. Supp. 3d 1007, 1021–22 (D. Kan. 2018)

A boycott of Israel, as defined by Act 710, is neither speech nor inherently expressive conduct.

First, a boycott is not purely speech because, after putting aside any accompanying explanatory speech, a refusal to deal, or particular commercial purchasing decisions, do not communicate ideas through words or other expressive media….

Second, such conduct is not “inherently expressive.” FAIR, 547 U.S. at 66. In FAIR, an association of law schools restricted military recruiting on campuses to express their opposition to the military’s then-existing “Don’t Ask, Don’t Tell” policy. Id. at 51. Congress responded to this restriction by passing the Solomon Amendment, which denied federal funding to law schools unless they allowed military recruiters to have equal access to campuses. Id. The law schools asserted that the law violated the First Amendment, id., but a unanimous Supreme Court rejected the challenge, holding that such conduct was “not inherently expressive” because the actions “were expressive only because the law schools accompanied their conduct with speech explaining it.” Id. at 66 (emphasis added).

The Arkansas Times’s argument that an individual’s refusal to deal, or his purchasing decisions, when taken in connection with a larger social movement, become inherently expressive is well-taken but ultimately unpersuasive. Such an argument is foreclosed by FAIR, as individual law schools were effectively boycotting military recruiters as part of a larger protest against the Don’t Ask, Don’t Tell policy.

For these reasons, the First Amendment does not protect the Arkansas Times’s purchasing decisions or refusal to deal with Israel.

The court also rejected the common wisdom that there is an unfettered right to boycott:

Claiborne concerned a primary boycott of white-owned businesses in Port Gibson, Mississippi by civil rights activists in order to protest racial discrimination. 458 U.S. at 899–900. The boycotters’ constitutional rights were being violated by local government officials, many of whom also owned the businesses being boycotted. Id. The Supreme Court observed that “[t]he right of the States to regulate economic activity could not justify a complete prohibition against a nonviolent, politically motivated boycott designed to force governmental and economic change and to effectuate rights guaranteed by the Constitution itself.” Id. at 914.

Crucially, Claiborne did not “address purchasing decisions or other non-expressive conduct.” Jordahl, Case No. 18-16896, Dkt. No. 26 slip op. at 5 (9th Cir. Oct. 31, 2018) (order denying stayof preliminaryinjunction) (Ikuta, J., dissenting); see also FTC v. Superior Court Trial Lawyers Ass’n, 493 U.S. 411, 426–27 (1990). Rather, the Court arrived at its decision only after carefully inspecting the various elements of the boycott, which consisted of meetings, speeches, and non-violent picketing. Claiborne, 458 U.S. at 907–08. It concluded that “[e]ach of these elements of the boycott is a form of speech or conduct that is ordinarily entitled to protection under the First and Fourteenth Amendments.” Id. The Court, however, did not hold that individual purchasing decisions were protected by the First Amendment. See id.

Similarly, under Claiborne, the Times maywrite and send representatives to meetings, speeches, and picketing events in opposition to Israel’s policies, free from any state interference. It may even call upon others to boycott Israel, write in support ofsuch boycotts, and engage in picketing and pamphleteering to that effect. This does not mean, however, that its decision to refuse to deal, or to refrain from purchasing certain goods, is protected by the First Amendment….

For these reasons, Claiborne does not hold that individual purchasing decisions are constitutionally protected, nor does it create an unqualified right to engage in political boycotts. In the years following Claiborne, it does not appear that the Supreme Court or any court of appeals has extended Claiborne in such a manner.

The court then dismissed the case.

In Arkansas, as elsewhere, anti-Israel pro-BDS activists still can dress up as peppers to protect America from Zionist vegetables. But they can’t contract with the state if they conduct their business with the state in a discriminatory fashion by boycotting Israel.

Roz Rothstein of the pro-Israel StandWithUs is thrilled:

“We commend the wisdom of the judge’s decision,” StandWithUs CEO Roz Rothstein said. “As the court recognized, taxpayers need to be protected from being complicit in discrimination, which both undermines state policy and harms its economy.”

I’m sure the reaction from anti-Israel activists will be furious.

I’m not familiar enough with the various state laws to compare Arkansas’s anti-BDS law to the others. But clearly the issue is not as clear cut, from a constitutional perspective, as some would have you believe.

sanity from a Federal judge…

Boom this just informed every State, Local Government and Congress how to Stop the Leftist Nonsense, in this case Hating Jews…

prime example Colleges do BDS to prevent sales of Sabra Hummus, however it’s made in USA and only because the owners are Jews

While there are only around 3000 (three thousand) Jews in Arkansas, we are treated surprisingly well here. It seems as though the majority of Christian Arkansans recognize Judaism as an early branch (or basis) of Christianity.

Sometimes mistakes are made, as they are everywhere, and often we do things right (or right past wrongs). This is a small and important victory for all unfairly punished groups.

Well, I just have to say, as persuasive as the Professor’s argument is, it can’t hold a candle to the three tomatoes in the picture!

How can you disagree with really smart tomatoes?

Is that what they are…tomatoes??? I thought they were lost elves.

If they only had pussy hats they might be credible. Oops! LOL!

This ruling is utter b.s. Pornography is protected speech but boycotts aren’t?

The distinction is very simple: Pornography is expression; boycotts are not.

This case is an example of why Trump needs to return to pushing a steady stream of judicial appointments.

There was a similar decision three years ago from the NLRB, covered here at LI: Advocating a boycott is protected speech; actually boycotting is not. This is an important distinction that the BDS movement is actively trying to blur. Anti-boycott laws are constitutional because they prohibit only actions, not words, and those actions are not inherently expressive.

If this were not so, then anti-discrimination laws would be unconstitutional. Every act of discrimination expresses someone’s opinion of the person discriminated against — an opinion that is absolutely protected by the first amendment. There isn’t and can’t be a law against advocating discrimination against black people, or women, or whomever. And no government can discriminate against those who advocate such discrimination. But acting on such advocacy is not protected, and is illegal, and pretty much every government unit in the USA, from the federal government down to the smallest municipal agency, routinely requires contractors to certify in writing that they do not engage in such discrimination, regardless of what opinions they may express. If BDS’s view were correct none of this would be lawful.

You can twist the law however you want, but don’t think people don’t recognize what you are doing. You will reap what you sow with your “heads I win, tails you lose” legalism.

Second, BDS does not target a foreign government, it targets foreign nationals. That is generally already illegal in the USA when it comes to employment or various other areas, and in many states it’s illegal in all public accommodations. There is nothing unconstitutional about this.

Advocacy, however, is completely protected by the first amendment, no matter what the cause. Legislatures cannot ban advocacy of discrimination, whether against blacks or Israelis or anyone else. But they can and generally do ban acting on that advocacy.