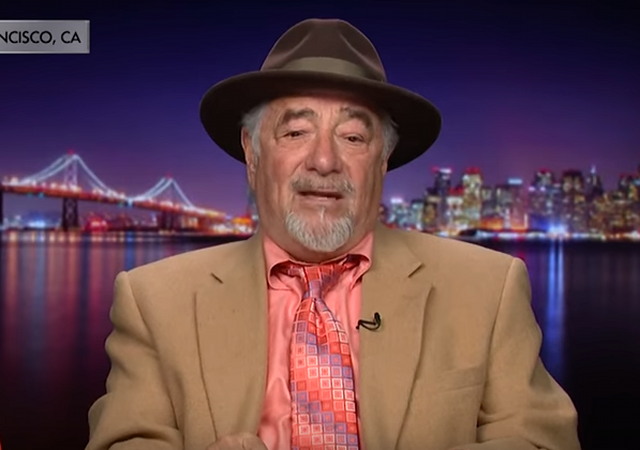 The threats were emailed to a restaurant Savage visits regularly.

City, state and federal agencies are taking a look at a vicious, hateful email sent to a restaurant frequented by talk radio icon Michael Savage that threatens to shoot up the establishment if he’s not denied future service.

Remember back in November when Fox News host Tucker Carlson and his family were targeted and threatened by protesters? This is worse.

Portions of the email sent to the restaurant state, in all caps, “I DEMAND THAT YOU REFUSE TO ALLOW MICHAEL SAVAGE … IN YOUR F-ING RESTAURANT AGAIN. HE IS A RACIST WHITE SUPREMACIST PIECE OF SH— … DONT WANT TO LISTEN TO ME? WELL I GUESS YOURE ALL GONNA F—ING DIE THEN CUZ I AM WAITING FOR THE MOTHAF— AND I WILL WAIT AND WATCH YOUR F—ING BUSINESS AND WHEN I SEE HIM GO IN THERE IM GOING TO START SHOOTING EVERY BODY I CAN FIND.”

The suspect then gets very specific.

“I OWN 3 GUNS AND I CAN DO SOME SERIOUS F—ING DAMAGE,” the email went on. “I WILL KILL AS MANY OF YOU RACIST-SUPPORTING/ENABLING WHITE SUPREMACISTS AS I F—ING CAN.”…

The email goes on to totter on toward Hate Crime Land.

“PEOPLE WILL F—ING DIE,” the email messenger wrote. “IM GOING TO KILL THAT F—ING CRYPTO JEW BUT IF YOU DONT WANT YOUR WHOLE BUSINESS TO TURN INTO A F—IN SHOOTING GALLERY AND YOUR CUSTOMERS TO GET CAUGHT UP IN THIS YOU BETTER KEEP HIM OUTTA THERE OR ELSE … YOURE ALL GONNA F—IN DIE UNLESS YOU DO WHAT I F—IN SAY. ILL REALLY MAKE U F—IN FAMOUS.”

WHOEVER E’D THAT DEATH THREAT AGAINST ME AND THREATENS TO ‘SHOOT UP A RESTAURANT’ I FREQUENT I STRONGLY ADVISE YOU TURN YOURSELF IN TO A LOCAL POLICE STATION. THEY ARE ON TO YOU AND YOUR ANTIFA FRIENDS. YOU HAVE COMMITTED A FEDERAL CRIME. MAYBE YOU CAN GET A LIGHTER SENTENCE

Savage, who told The Times he is accustomed to receiving death threats, said the severity of the email has prompted city, state and federal law enforcement agencies to take the threat “very seriously.”

“Over the years, I have received many threats and have chosen to ignore them,” Savage said. “However, given the violent, vile times we are living in and the specific nature of this threat, both I and some serious agencies are taking this threat very seriously.”

Are we now the Banana Republic of the United States? This kind of thuggery is typical of a banana republic.

Not a real surprise since the “bananas” keep flooding our southern border every day.

There is no need to cast aspersions on brown immigrants. The US grows plenty of thuggery without imported thugs being a notable factor.
https://www.youtube.com/watch?v=DDK9Ic2qx3I

Nah. There is even less need to defend illegal immigration.

Follow the damn law.
Enforce the ones we have.

It wasn’t an “aspersion”, it was an obvious play on the commenter’s reference to a “banana republic”, referring (as I know you know) to unstable and authoritarian governments typical of S. and Central America (i.e. where bananas are grown). It has nothing to do with skin color.

He or she does not sound like a black or hispanic but like a mama’s basement dwelling white boy.

The Left always, eventually, resorts to violence, threats of violence, or glorification of violence to advance its agenda. Always.

I’m about 200 pages into my first re-reading of Gulag Archipelago in 45 years. Besides the remarkable parallels between the early days of the Soviet Union and our current coddled Antifa mobs, I am struck by the exponentially more violent and depraved actions taken by the communist enforcers as compared to what the Tsarist security agencies felt were warranted and acceptable. I am afraid that the leftist freak who shot up the congressional softball practice a couple of years back is not the outlier that many wish.

If the threat came via email, the source of origin will be known fairly quickly, even if they used a VPN.

This sounds like a typical Soros funded/sponsored act of terroristic threatening, such as Antifa. Antifa can be inhibited with just a few sharp shooters. Just taking out one of the Antifa freaks per event will help them understand what the meaning of selective randomness means.

Just imagine if such a thing were happening to a mafia member?

Can we get some direct questions from reporters to Nancy Pelosi, Elizabeth Warren, Maxine Waters, Loretta Lynch, Hillary Clinton’s election campaign members, and the DNC about their involvement in, and encouragement of, violence against public figures? Project Veritas laid the foundation for it.

After the first several quotes from the threats, Chumley reports of the sender that “ The email goes on to totter on to Hate Crime Land.” The hate speech and hate crime laws are terrible to begin with, but given their fact, where pray tell does Chumley think the writer had been and how much farther until arriving in “Hate Crime Land?” If apprehended before ‘tottering on’ would there be no indictment?

There are no “hate speech” laws, and hate crime laws are right and proper. This threat started out as an ordinary crime; it only becomes a hate crime towards the end. No, of course that could not possibly affect any hypothetical indictment; how could it? Hate crime laws are only relevant in sentencing. At indictment the only question is whether there’s a prima facie case that the accused has committed a crime; either there is or there isn’t. How bad the crime was doesn’t come up until the jury has already decided that it was committed in the first place.

This isn’t an argument, it’s a question: Are you saying that a jury could find a defendant guilty of killing somebody and then the judge decides whether it was manslaughter, 2nd degree or 1st degree murder? After all, as with a hate crime, the difference is in the mental state of the perp, right?

Whether a crime was motivated by hatred is a question of fact, so it must be determined by the jury, not by the judge. But of course it cannot decide this until after it has decided that the crime was committed in the first place.

Manslaughter, 2nd degree murder, and 1st degree murder are different crimes, so they’re not relevant here. In some jurisdictions only the prosecutor can decide what charges to bring; in some, a greater charge includes all lesser charges, so if someone’s charged with 1st degree murder the jury could find it was actually involuntary manslaughter.

OK. I apparently misunderstood what you were saying in the first place. I was thinking that once the jury has acted, that any further determination would be in the hands of the judge.

Yea, yea, nothing to see or worry about here. Until the friend of the threat maker decides to act in response to the threat.

Art Bell made an art form of the hidden radio studio.

Craziness abounds but using “white supremacist” and “crypto jew” in the same rant is an interesting one. Pot meet kettle.

The likes of Ben Shapiro have been called “Nazis,” so this is nothing new. Meanwhile the left accepts funding from George Soros, a Jew who actually facilitated Nazis atrocities and is unrepentant.

Soros did not facilitate nazi atrocities, and has nothing (in that regard) to feel sorry for. He has very bad ideas, and supports some very bad causes, but that doesn’t justify slandering him, especially with such a vicious accusation.

If it is true that you can email this kind of crap and not be traced then the whole email system should be scrapped and rebuilt so every message can be traced.

On the contrary, we should wish for greater anonymity. Freedom depends on it.

Only a Leftist radical would find nothing contradictory about threatening to commit mass murder, in the name of allegedly combating “white supremacism,” while simultaneously threatening to murder a “crypto Jew” (whatever that is).

Crypto-Judaism. Crypto-Judaism is the secret adherence to Judaism while publicly professing to be of another faith; practitioners are referred to as “crypto-Jews” (origin from Greek kryptos – κρυπτός, ‘hidden’). The term is especially applied historically to Spanish Jews who—outwardly—professed Catholicism,.

I had to look it up. I like to be well versed in my racial slurs.

Interesting — thank you for the explanation.

So, if I understand this correctly, the person who is threatening Savage and the restaurant’s patrons, believes that Savage is betraying his Jewish faith/identity, because he holds and espouses conservative beliefs? These people are insane.

No, he seems to be accusing him of being secretly Jewish while pretending not to be. Which is just weird.