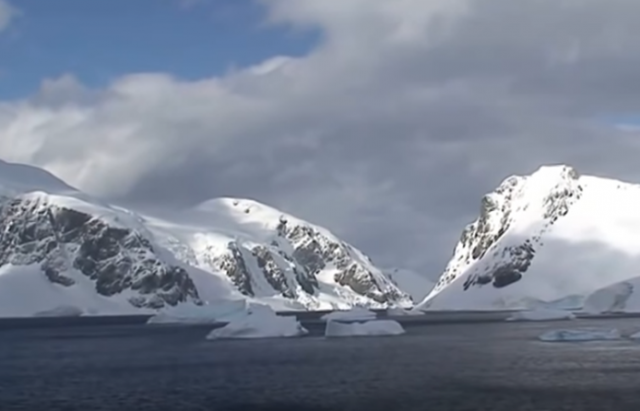 The news cycle has been overwhelmed with chilling stories of the Midwest being colder than the continent of Antarctica this week.

On Wednesday, Chicago will be colder than parts of Antarctica, Alaska and the North Pole.

The Windy City’s “high” temperature on Wednesday should be around 10 below zero, while the overnight low Wednesday night into Thursday morning is forecast to be in the 25-below range, according to the National Weather Service in Chicago.

Thus, for a while early Thursday, Chicago will be colder than the North Pole. “The Arctic Ocean – including the North Pole – will probably be around 20 below,” said weather.us meteorologist Ryan Maue.

Chicago’s all-time coldest temperature of 27 below zero could be broken Thursday morning, the weather service said.

I will simply point out that it is summer in the Southern Hemisphere. The warmest month in Antarctica is January, when it’s about -28 °C (-18 °F) on average.

There have been many comments about this particular development, but perhaps this one is best

In the beautiful Midwest, windchill temperatures are reaching minus 60 degrees, the coldest ever recorded. In coming days, expected to get even colder. People can’t last outside even for minutes. What the hell is going on with Global Waming? Please come back fast, we need you!

And while the American press is pushing its “climate change” narrative and ignoring deniers, I would like to point out that there have been several researchers and pundits who have been projecting cooler temperatures based on solar activity levels.

Legal Insurrection readers may recall my discussions on the Maunder Minimum. In a nutshell, sun spots are indicative of solar activity…the more sun spots, the more activity, the more “global warming.” Early records of sunspots show that the sun went through a period of inactivity in the late 17th century, which corresponds to the “Little Ice Age.”

We have already had a significant number of sunspot free days in 2019 already. Below is a chart with the annual sunspot count confirming an 11 year solar cycle, and it appears we are heading for an even lower solar activity period. 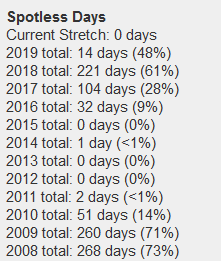 Dr. Helen Popova (Skobeltsyn Institute of Nuclear Physics and of the Faculty of Physics of the Lomonosov Moscow State University) is part of the team that have been studying the sun’s magnetic waves and accurately predicted the number of sunspots. Based on the evidence, her team predicts a sharp decline in solar activity in years 2030—2040 comparable with the conditions that existed previously during the Little Ice Age.

“Given that our future minimum will last for at least three solar cycles, which is about 30 years, it is possible, that the lowering of the temperature will not be as deep as during the Maunder minimum. But we will have to examine it in detail. We keep in touch with climatologists from different countries. We plan to work in this direction”, Dr Helen Popova said.

The notion that solar activity affects the climate, appeared long ago. It is known, for example, that a change in the total quantity of the electromagnetic radiation by only 1% can result in a noticeable change in the temperature distribution and air flow all over the Earth.

Alternatively, there are those who will believe that “pulsating warmth” is responsible for brutal winters.

In a presentation last month at the American Geophysical Union’s annual meeting, meteorologist Judah Cohen of analytics firm Atmospheric and Environmental Research Inc. suggested that anytime there’s a period of “pulsating warmth” in the Arctic, it tends to coincide with a bout of severe winter weather on the East Coast.

In each case, he said, the reason seems to be linked to a temporary weakening of the polar vortex, which sends cold Arctic air streaming down into the mid-latitudes. The same processes are thought to be responsible for a recent pattern of colder, harsher winters in other parts of the world, such as Siberia.

So, what are you going to believe: Trace levels of a life-essential gas are impacting the global climate, or our neighboring star’s solar energy level is more influential?

For those of you in the Midwest, please stay safe and warm. I am going to enjoy the sole benefit of being a Southern California resident.

In terms of science the media is at the same level as voodoo dolls, shrunken heads, and crystal balls.

“. . . summertime in Antarctica” Yeah, when it’s sunny and balmy there, with up to 24-hours of daylight. The ice cap melts, and penguins like to splash through the puddles.

Come on, global warming enthusiasts! That wasn’t the point of the comparison. We all know that it gets unbelievably cold at the South Pole in the winter! (And isn’t so great in the summer, either.) And that Chicago’s climate is nothing like the Antarctic—even if Chicagoans sometimes can almost imagine it might be getting there. The point is the temperature readings crisscrossed, something they never do. And yes, we all know that this was a freakish event, and that weather is not climate. Just remember that, every time you gloat when there is a heat wave.

“I will simply point out that it is summer in the Southern Hemisphere.”

Thank you, Leslie. Every single time I’ve heard the press use the phrase “It’s colder in Chicago than Antarctica” over the last few days, they never seem to mention that. Maybe they don’t know. It’s not like they’re hiding… well, I suppose in the debate between if it’s ignorance or malice, the option of ‘and’ is always possible.

When it comes to journalists and science, one should never assume the journalist has even a clue.

I suppose most journalists do know that seasons are reversed between the northern and southern hemispheres, but, I wouldn’t bet that even half could offer a clear, logical explanation for why that is.

Although they are saying “Antarctica,” which at least includes a good deal more real estate than just the geographic South Pole.

I’m old enough to remember that there was a coming ice age due to CO2 emissions.
.
NPR made me grimace this morning when they claimed that the cold weather is due to global warming. Apparently, unseasonably warm weather at the North Pole was forcing cold air down into the Midwest.
.
It’s interesting that I remember warm air displacing cold air. What they are saying is the opposite. As usual Public Radio is putting our taxpayer dollars to good use.

I also recall predictions of a new ice age coming. When I mentioned that to true believers in global warming, I got indignantly shouted down. Thanks for being a corroborating witness.

I remember it too, but if you look now they claim it was just one stupid article in Life magazine or something like that, and no serious scientists ever said anything like that. All I can say is that I didn’t read Life, so it was definitely more than that.

I also remember the predictions of “nuclear winter” in the ’80s.

I’m old enough to remember that there was a coming ice age due to CO2 emissions.

You misremember. Nobody was blaming CO2. I seem to recall the ozone hole getting some of the blame, but I may be misremembering too.

You have to distinguish between weather and climate. People in the media say stupid things about weather implying climate change. For example, they say that hurricanes or tornadoes or drought or a hot summer or a bad fire season “prove” climate change. Not true. Weather is, and has always been, highly variable.

The only problem with your scenario is the length of time you are talking about. The weather cycles are several hundred years in length so if you look at a 30-50 year time frame it can be used to misconstrue what is happening just like the climate alarmists are doing now.

Exactly right. One of the hallmarks of the AGW hysteria is looking at extremely short term trends and projecting them into the future.

And then fabricating the data to fit their phony model.

In order to get any mileage out of this it has to be blamed on carbon dioxide. And they’re working on it—Fox is running with the theory that hot air from Morocco hopped into the stratosphere and somehow came down in the Arctic, disrupting a normal everyday polar vortex and sending part of it straight toward the US midwest. So warm air causes cold air to forget its proper place, and from there my carbon footprint isn’t such a stretch (except that I’m nowhere near Morocco). As usual the reporters have no idea what they’re blathering about but that won’t even slow them down.

The only reason that the record cold in the Midwest is so news worthy is because it was not supposed to happen. At least in the minds of the media. The media, as well as liberals worldwide, have totally embraced the concept of man-made global warming, which was sold as being inevitable, unless humanity returned to a Stone Age level. Then, along comes a predictable cooling trend. For the last few years this trend has been dismissed as the result of increased global warming which somehow caused winter temperatures to drop, slightly. The media fully expected the cooling trend to reverse nearly immediately. Alas, the universe is not controlled by human delusion. Historically, we are going to experience colder temperatures, worldwide, for a while.

One thing not covered in this article is the effect on the climate by the eccentricity of the Earth’s orbit around the Sun, which causes the planet to be at a variable distance from the star during an ~450,000 year cycle, composed of ~100,000 year segments.

For anyone who was in the midwest in 77-78, what they have at the moment is balmy at best. Where I was in Ohio went below 0 in December and only got above 0 again in February. Yes, ALL of january was spent below 0. That summer I bought a rabbit fur state trooper hat from LL Bean. My head was never going to be cold again, ever!

As a kid back around 1950, I remember looking at the thermometer on my way off to grade school and seeing the temperature at -20. I didn’t think much of it one way or another other than “Boy, it’s cold”. As far as I know, nobody else thought much about it either.

I suspect plenty of loony lefties will take the position that President Trump’s decision to withdraw the US from the Paris Climate Accord is the proximate cause for the wintry weather we are experiencing this winter. They probably also believe that it is the cause of every bad thing that has ever happened to anyone, anywhere, ever.

I listened to all the clowns claiming that it has been decades/generations since the US has seen temperatures like those current. I thought it odd as I have friends who live in the Watertown NY area and they had a recorded low temperature (actual) of -32 F on 28 December 2017. Didn’t realize generations were so short a time period.

This is just stupid, these temperatures are a regular occurrence in Chicago.