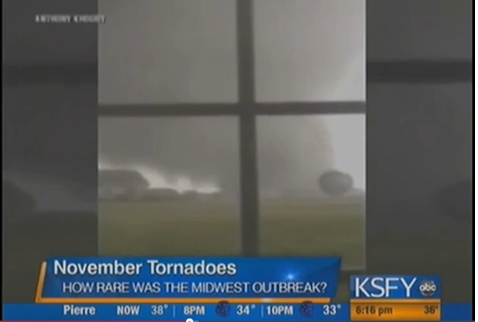 Americans planning to travel around the East Coast this Thanksgiving are in for a real weather treat:

A nor’easter is swirling together and it could hit the east coast just in time for Thanksgiving, Quartz reports.

The storm looks like it will stretch from New England down to the Carolinas, bringing snow, wind, cold, and rain along with it. Quartz’s report, which cites the National Weather Service, paints a particularly dreary picture for Cape Cod and says the area could receive hurricane-like gusts of wind.

Given the storm’s current trajectory, the nor’easter is expected to strike sometime between Tuesday evening and Thursday, during the busiest travel days of the year.

NJ.com spoke with meteorologist Gary Szatkowski of the National Weather Service in Mount Holly two days ago.  Then, Szatkowski said to use the nor’easter warning as a “helpful heads up” and encouraged people to watch the storm’s track. He also said it was too soon to tell just how hard (or not) the storm could hit. A cold front is expected to hit the northern east coast before the storm though, which could drop temperatures to the 20s or teens by Monday.

One suspects that no matter how cold the storms get, the usual suspects will be out claiming “global warming.” In fact, after Superthypoon Haiyan claimed over 5000 dead in the Philippines and a spate of rare November tornadoes created havoc in the Mid-West, there was the classic “global warming blame game.”  Twitchy provides a sampling of the recent eco-panic:

Interestingly, however, the BBC recently did a report detailing concerns that we may be entering another “Little Ice Age.” As the sun remains conveniently out of the equation of global warming proponents, this is a rather eye-popping development.

The theory centers on a concept called the “Maunder Minimum.” In a nutshell, sun spots are indicative of solar activity…the more sun spots, the more activity, the more “global warming.” Early records of sunspots show that the Sun went through a period of inactivity in the late 17th century, which corresponds to the “Little Ice Age.”

Watt’s Up with That has a summary of the British report:

According to Professor Lockwood the late 20th century was a period when the sun was unusually active and a so called ‘grand maximum’ occurred around 1985.

Since then the sun has been getting quieter.

By looking back at certain isotopes in ice cores, he has been able to determine how active the sun has been over thousands of years.

Following analysis of the data, Professor Lockwood believes solar activity is now falling more rapidly than at any time in the last 10,000 years.

He found 24 different occasions in the last 10,000 years when the sun was in exactly the same state as it is now – and the present decline is faster than any of those 24.

Based on his findings he’s raised the risk of a new Maunder minimum from less than 10% just a few years ago to 25-30%.

And a repeat of the Dalton solar minimum which occurred in the early 1800s, which also had its fair share of cold winters and poor summers, is, according to him, ‘more likely than not’ to happen.

So, as you face weather-related travel delays this Thanksgiving, you might find yourself joining Britain’s Prime Minister David Cameron in his sentiment: “We have to get rid of all this green crap.”

Yeah! Just 9 degrees F this morning in the Northern Tier of PA.

Brutally cold in Maine this morning. Brrrrrr. Turned up the heat. I’m going to burn me some fossil fuel and add to global warming.

This is not new given the big bust of the current solar maximum and possible ensuing extended solar minimum that could mimic the Maunder minimum a few centuries back.

I’ve just spent the last several hours raking global warming off the roof and shoveling it off the sidewalks and driveway.

Heat doesn’t kill as many people as cold.

One summer in France, about 15,000 elderly people died cuz the much historied and cultured Euroes don’t have the civilized comfort of air conditioning.

We need more greenhouse gas production to warm things up!

Without the sun earth would be a giant ball of ice but global warming loons leave it out of the reasons for why the earth may be warming or cooling. I’m no scientist but always found that ridiculous.