Today’s H1N1 strain related to the Spanish Flu and Swine Flu. Though not as potent, it still has the potential to be lethal. 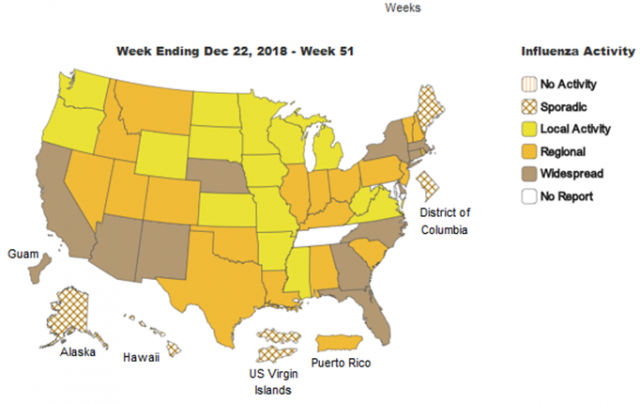 This year’s flu season is shifting into a fever pitch, as the disease spreads through the nation.

It is the H1N1 strain, which is the same one as the infamous Spanish Flu that struck a century ago. However, today’s version isn’t nearly as potent.

“Influenza viruses are constantly changing,” noted Kristen Nordlund, a spokeswoman for the Centers for Disease Control and Prevention.

But the modern-day strain isn’t the same as the one from 100 years ago or even 10 because flu viruses evolve through what’s known as antigenic drifts and antigenic shifts.

When the virus “drifts,” the antibodies a person creates against older viruses no longer recognize the “new” virus — putting the person at risk of getting sick again, the CDC says.

Furthermore, reports indicate that this year’s vaccine is more effective than those offered last season.

Doctors are saying one piece of good news, despite the rocketing infection rates, is that this year’s flu shot is more effective than last year’s.

According to the New England Journal of Medicine, last year’s vaccine effectiveness was 36 percent overall, making the 2017-18 season one of the most severe on record.

During the last full week of January, the CDC reported that one of every 14 visits to doctors and clinics nationwide that week was for symptoms of the flu.

That made it the highest level since the deadly swine flu pandemic in 2009.

However, this version of H1N1 has the potential to be deadly. It is suspected of being a factor in the recent death of young, vibrant conservative pundit Bre Payton in San Diego.

One of the questions being asked in this case is how the flu could claim the life of a healthy, young adult so quickly. One possible answer is that the robust immune system is more susceptible to triggering a cytokine storm.

When the infection is in the lungs, this severe inflammation can cause permanent damage. A prolonged cytokine storm will eventually shut down breathing completely.

Reports from elsewhere in California show that the flu season is off to a deadly start.

Since September 30, 36 people have died in California from the flu. Last year by this time, there were just seven deaths.

“The fact that these deaths are rising so early in the season, it’s concerning, and it’s only going to get worse before we get better,” said Dr. Michelle Quiogue.

While the numbers are alarming and suggest we are on the fast track to surpassing last years death toll, health officials say the flu is unpredictable. They recommend you stay prepared.

Perhaps the best information to have in this season is when to seek medical attention after being stricken with the flu. Professional medical care should be sought promptly if any of the following occur:

In light of the 100 year anniversary, I wanted to share a documentary on the Spanish Flu in America. Though not as potent, today’s H1N1 still has the potential to be lethal. Please take care!

It is true. I recently walked through a graveyard in Michigan, where I noted a whole section of graves dated 1918/1919…and I knew exactly what had struck. https://flutrackers.com/forum/forum/welcome-to-the-scientific-library/-1918-pandemic-data-stories-history/22239-1918-pandemic-influenza-michigan

Hypochondriacs will freak over the cytokine storm bit. That’s got to be one of the rarest ways of dying ever propagated by paranoid internet hypochondriacs. And media coverage and reaction to a fellow media personality dying from the flu has been excessive. It’s like you all see your fate somehow connected to hers. Or something weird like that.

any word on how well this year’s vaccine matches up to the strains going through the population? they have to forecast a year out, in order to make the vaccine in large enough amounts, and some years they guess better than others.

pro tip: even if the vaccine recipe isn’t a perfect match, it still provides significant protections from whatever is going around, and will lessen the effects nd shorten your recovery.

BTW: the flu kills people every year, so it’s not like this year is anything different.

Bre Paxton and the young Guatemalan boy at the border both died from the same deadly strain of influenza.

One big, subtle risk factor for this disease is living alone. Being sick enough to die does not feel all that different from just being sick. An adult with vomiting and diarrhea can dehydrate over night, feel guilty about calling in sick, crash by noon the next day.

So, if you live alone, and you get real sick, go ahead and go to the doctor early. Where I live, the emergency clinic is much, much faster and more effective than the hospital emergency room. Flu strains can be identified quickly, and there are very effective medicines available.

I had it over the holidays, it was pretty rough for a few days. No vomiting or gastrointestinal issues for me but fever, chills and a deep, hacking chest cough that was brutal and helped only by prescription cough medicine.

Never been a fan of the flu shot but might start getting it next year.

I get the shot each year. Something odd: if I get the shot at the doctor’s, I’m fine. Drug store shots hit me like I’ve been hit by a locomotive.

Thank you for the reminder. I just went and got my flu shot at my local Costco. I’ve been telling the hubby to do the same.

“just went and got my flu shot at my local Costco….”

Did you have to buy the 10-dose pack?

I’m reasonably sure I had that swine flu in 2009, with bronchitis the following week. It was miserable.

Something very interesting about the geographic distribution of ‘widespread’ flu, the outlier being Nebraska. Just an observation.