A rising star in conservative media who died unexpectedly. 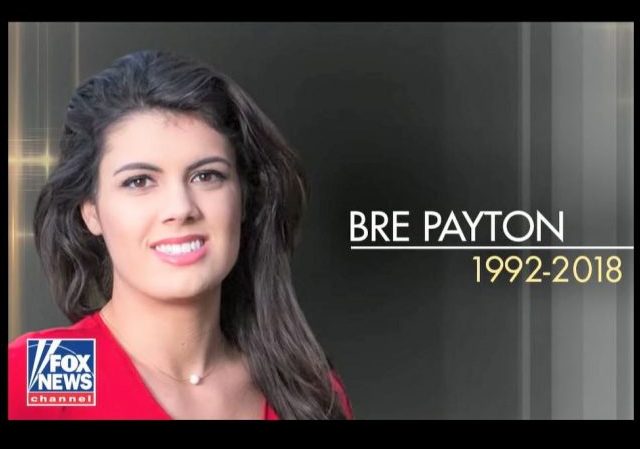 Bre Payton was a 26-year-old rising star in conservative media.

Ben Domenech clearly knew what he was doing when he hired her.

Her days, according to a profile of her on her college’s website, sound very familiar to us at Legal Insurrection:

Payton works remotely, and occasion­ally in her pajamas. She spends her time scheduling social media posts, monitoring news, writing, and planning topics for fu­ture articles. Typically she’s at the comput­er from 8:30 a.m. to 4:00 p.m. She often ends up working a couple evening hours as well. She never really stops.

Bre also frequently appeared in conservative media, including Fox News. But since I don’t watch much TV, I mostly knew of her from The Federalist.

Bre was one of an emerging group of young conservative writers and activists who give me hope. The pressure to conform to liberal norms is immense, and it takes a special type of person to go against that wind and succeed. 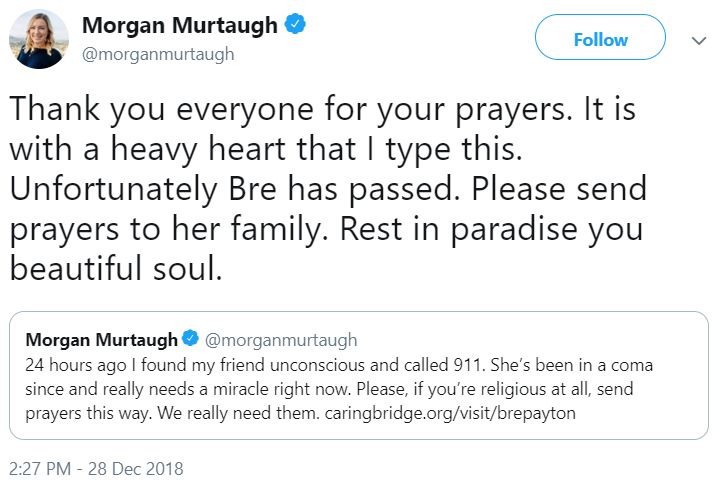 In September 2009, I came down with swine flu (aka H1N1), which was sweeping the Cornell campus resulting in the death of a student. Because of the campus publicity and warnings, I sought medical attention at the first symptoms, which was fortunate. Very quickly it felt like someone parked a truck on my chest. For the first and only time ever, I had to use the types of inhalers used by people with asthma just to keep my lungs open and to prevent pneumonia. I totally understand how someone could die quickly from swine flu.

Bre was two years younger than my youngest child. The phone call her parents got is the type of phone call all parents dread. No matter how old our children get, we live with that fear.

I remember coming home about 15 years ago after a long cycling ride in the cold rain, drenched and wringing out my clothing on the driveway when I heard coming from inside the house my wife give out what best could be described as a wail. I knew in that instant someone had died. She just learned that her close friend’s teenage son had been killed in a car accident. We went to their house, and it was beyond description. Since then they have told us what another friend, who lost a teenage son to a drunk driver, has told us: While the emptiness and pain never leave, it is possible to find joy in life. But it takes time. I hope and pray for Bre’s parents.

Someone else we knew, the middle child of three brothers, told me a story about 30 years ago that has never left me. The youngest brother, not yet a teen, was at the family’s lumber yard when one of the stacks of lumber fell from the top tier, crushing and killing him. He recounted the story of how the oldest brother went into his room when they heard the news, closed the door, and emotionally never came out. I also hope and pray for Bre’s siblings that they get the guidance to keep that emotional door open.

There are others who are in my thoughts, including Bre’s boyfriend, who frantically rushed to San Diego when he heard that she had fallen ill, soliciting the help of United Airlines on Twitter. Their hopes and dreams never came to be: 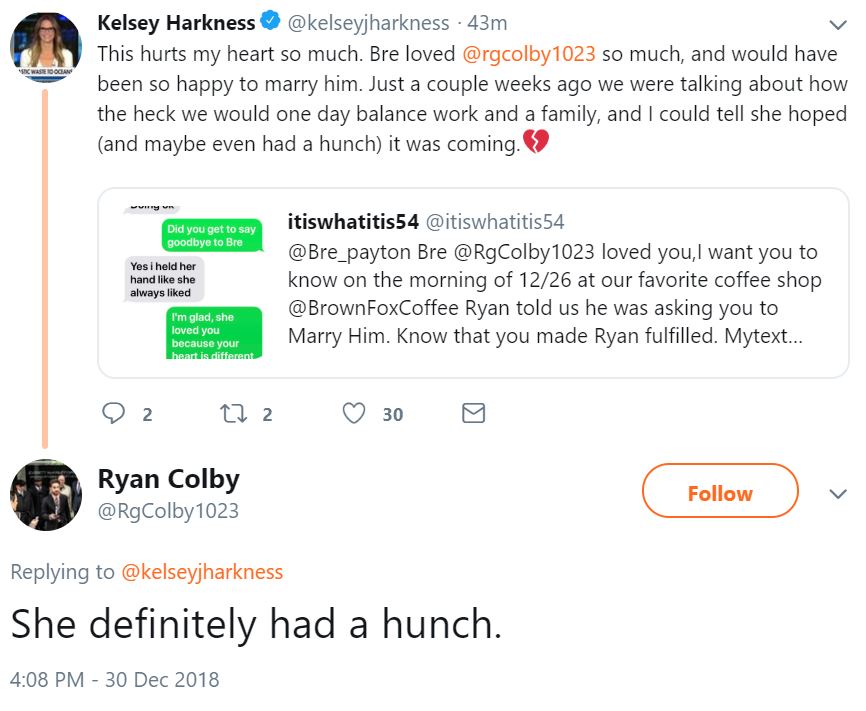 And the many people with whom Bre was friends.

I’m also thinking of the folks at The Federalist. I’ve only met two of them once at CPAC several years ago, Sean Davis and Mollie Hemingway. But I feel that The Federalist is a kindred spirit to us at Legal Insurrection, just a lot better organized.

I remember that dreadful email and phone call I received on September 7, 2014, from Mandy’s mom telling me that Mandy had suffered a catastrophic stroke. Mandy’s illness hit like a family member had fallen. Based on what they have tweeted and written, it’s clear that the other staff at The Federalist feel that way about Bre:

Bre brightened the lives of everyone around her. She was joyful, hard-working, and compassionate, and she leaves behind friends and colleagues for whom she brought nothing but sweetness and light.

Though we are heartbroken and devastated by Bre’s death, we are comforted in the knowledge that she was a woman who lived a life marked by deep Christian faith, trusting in her Savior, Jesus Christ – in the God who promises the way our story ends is that “He will wipe every tear from their eyes, and death shall be no more.”

Bre is survived by her parents, George and Cindy; siblings James, Jack, Christina, and Cheekie; and boyfriend Ryan Colby. Her family would appreciate privacy and your prayers as they grieve this loss.

I understand how deeply Bre’s co-workers mourn her loss, and I pray for them.

I didn’t know Bre Payton, but I have learned a lot in the past couple of days about her, those she loved, and those who loved her.  I feel the loss very deeply, as if we had lost one of our own. Which in some ways we did.

A fund has been established in Bre’s memory “towards college scholarships to support other young, rising Christian leaders who share in Bre’s passion for truth, purpose, and life.” You can donate here.

You can do everything right, and yet your own life can be taken away from you.
RIP, young lady.

Horrifying enough that we lost her, but to the flu…

Flu killed more World War I troops than any battle:

It shows the leftist cancer we’re up against.

Indeed. Check this disgusting post claiming on the basis of *one* tweet when she was 19, and which seems to be sarcasm anyway, that she held anti-vaccine views and thus deserved to die from a vaccine-preventable disease like the flu.

It just seems so unfair that such a young and talented, to say nothing of her beauty, woman should be gone so soon. I am not a religious person but sometimes there is a need for some explanation of life’s miscues.

Someone once said that only the good die young. May God welcome her and comfort her family.

The Young Guatemalan boy who died at the border had the same killer strain of influenza.

Such a senseless loss. The words I want to write won’t come. My two children are just a few years older. I can’t even imagine the pain of losing either of them — my mind won’t even let me contemplate the thought.

Deepest condolences to the family and friends of Bre Payton.

What a beautiful lady she was, R.I.P.