The film’s relentless hopelessness is disturbing. 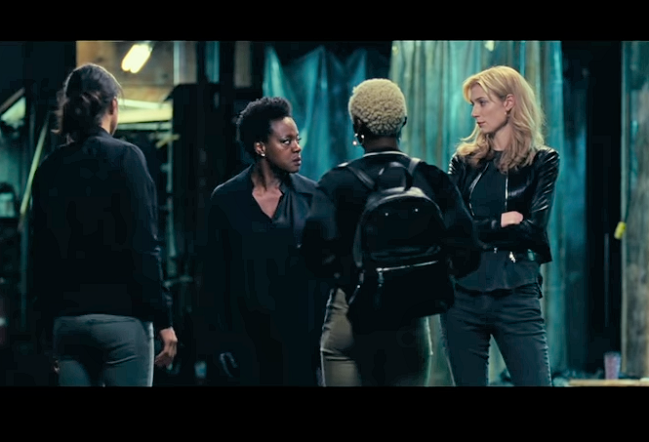 Fans of British writer-director Steve McQueen’s long overdue follow-up to 12 Years a Slave have had half a decade to muse over the now acclaimed director’s short career beginning with the brutal and unsettling Hunger, followed by his second team-up with actor Michael Fassbinder in Shame. Given the high regard his previous trilogy has garnered, Widows is a rather conventional career pivot.

With his last film, he launched his career into the spotlight, Besting 2013 Oscar nominees like Gravity and American Hustle. As is very much the average career track in Hollywood today, making an excellent art movie generally earns you the keys to direct a big Hollywood action movie. Thankfully, McQueen brings us a quieter, more emotional, and more personal kind of thriller than the majority of films you’ll see in theaters this year.

Widows very much exists within McQueen’s normal paradigm of films. It’s a lovingly shot, deliberately paced, and brutal experience dedicated to violently ripping the band-aid off of any semblance that urban government authority exists to serve you.

At the core of the film’s conflict are a small group of criminals and their wives caught between the corrupt machinations of a pair of Chicago political machines attempting to elect a candidate to the position of Alderman of the 18th ward.

Living in Widow’s Vision of Chicago

The ward as we come to see it, intensely captured in one several minutes long panning shot across dozens of blocks of urban blighted Chicago, is in disarray. It’s a brutal, broken world where the most poverty-stricken elements of society are left desperate to survive and forced to compromise themselves just to keep afloat.

The people caught in that machine and trying to build new lives for themselves are universally forced to prostrate themselves at the feet of the machine just to gain a foothold as we see in the case of a hair stylist who is forced to pay monthly bribes to keep her shop open. Not even the rich are safe in this world where a rich young black teenager can be shot dead in a moment for reaching into his glove compartment.

In McQueen’s Chicago, there is no hope for the living. The Mulligans, a multi-generational family of politicians, have been responsible for handing down the alderman position for two generations. The Mulligans are cynical fronts. Both sell themselves as progressive politicians stimulating small minority-owned businesses in their district but both cynically despise their ward’s inhabitants.

The eldest Mulligan is a virulent racist clinging to his legacy, and his son cynically wants to use his ties to organized crime and to backdoor contracts and preserve his progressive image to be propelled into becoming the new Mayor of Chicago.

His competition is somehow worse. Jamal Manning sells himself to be a humble candidate launching a grassroots campaign out of the back of a church, but he is, in reality, a brutal crime boss using the campaign to launder money and build his retirement fund.

When he finds himself robbed by a random group of thieves who somehow knew about the illicit earnings, he sets his brother, a cruel intensely focused fixer willing to kill and break anything in his path, on the wife of the leader of the thieves in a desperate attempt to shame her into repaying the money her husband stole.

There are few redeemable characters in the world of Widows. Everyone is indebted, corrupt, cowardly, or otherwise a victim of the system. Robert Duvall’s character does the best to summarize the struggle at the core of the film. There is no progress, only survival.

There’s nothing that Mulligan, Jamal, or anyone can do to fix the South Side. It’s trapped in a vicious cycle of violence, corruption, and poverty. The best that these characters hope for is to preserve their own lives at the expense of others.

The only spot of sunshine in the film comes in the form of Viola Davis’s character’s strength in the face of insane odds. She carries the most grievances of any character in the film and her will to survive is the only thing that propels her to dig her out of the well of greed and corruption that the people around her have thrown her in.

Even on that journey, there is very little to gain. She and the other widows of the deceased criminals that died attempting to steal $5 million which Jamal illicitly garnered through his campaign stand to gain a lot if their heist were to work out, but they all intend to use the money to pay off their debts and keep the lives they had before their husbands died.

The Hopelessness and Nihilism of This Progressive Vision

Widows is a vision of progressive nihilism. It’s a world where hope for the future is drained away and the injustices that plague the system are nigh insurmountable beyond whatever meager vigilante justice can achieve.

After my screening of the film, I recalled the climactic scene in Frank Capra’s seminal masterpiece Mr. Smith Goes to Washington. For the film-goers in 1939, the mere idea that policies or institutions could be corrupt was shocking. Yet in the film’s strongest efforts to defame the American Congress and dress down the worst forms of backroom corruption, there is still a hope born in its relentless optimism and struggle against corruption.

Widow’s relentless hopelessness is disturbing. If the film does think there is some way to save the South Side of Chicago from the depths of poverty and violence the plague, it ’s born in the same relentlessness that drives Viola Davis to survive. Yet even that barely pays the most basic immediate debts and keeps the system the way it was before.

The film’s finale, without spoilers, seems to suggest that this sense of nihilism and hopelessness is cowardly and must be destroyed and yet the system isn’t confronted by the end of the film. The best that can be done in the end is to honor the dead and try to build some semblance of friendship and justice beyond the horrors. The real bad guys get away in the end. The only real justice comes when you survive and your enemies don’t.

Maybe that’s honest in the sense that Chicago is a place where corruption, graft, and backroom deals reign supreme, but if the only way out of the quagmire is violence and the vain hope of some future after the turmoil, it goes a long way to show why the progressivism is so willing to push violent solutions in the aftermath of their losses.

When Hillary Clinton goes on live TV and says that there can be no civility when the policies she advocates are being denied by the party in power and when black bloc groups like Antifa are given unlimited reign to assault conservatives, we see this same progressive nihilism at work.

The left cannot fathom the victories of conservatism without calling forth the bleakest vision possible of modern American life. Yet these problems that Widows and the progressive left berate are problems that were born from progressivism. Chicago is owned by the left in its totality. In this world, there is hope for transcending the difficulties that plague life.

Chicago is famous for its poverty, violence, political autocracy, and corruption. The city has been drowning in these problems since before Al Capone reigned the streets. Yet even amongst the urban blight, there is social mobility. There are ways to fix the problems and help people. There are clearly people living in the ruins drowning in hopelessness. As excellent as Widows is, it’s not a vision that ought to be indulged.

Sounds like an awful movie with no redeming qualities

The last time I was in Chicago, illegals were blocking streets and disrupting stuff while demanding things. They do have some nice museums, but we wasted half a day trying to get to one. I have not gone back since.

Obama and Chicago are a match made in Hell.

Chicago and the “progressive” agenda are akin to pigs wallowing in their own filth. Blame whitey, blame capitalism…anything to avoid looking in the mirror.

BTW, these are the same folks who tell me what to think, what to say, what to eat, how to live, ad nauseum. I couldn’t care less for their “plight” when they blatantly and violently refuse to drop their shovels and accept the offered ladder.

this is me, not giving a damn…

The key take-home message is that none of their problems are due to their own bad decision making, ever.