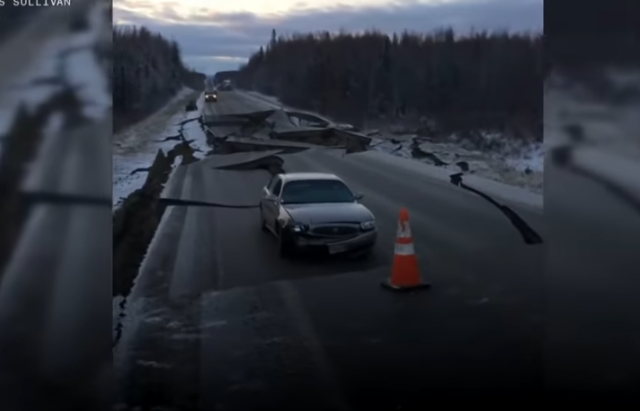 The Earth has been on quite a roll recently . . . quite literally.

Alaska Governor Bill Walker has issued a declaration of disaster after a magnitude 7.0 earthquake and over a dozen aftershocks struck Anchorage, Alaska Friday morning, according to a post on Facebook.

“Major General Laurie Hummel and I are now working with emergency responders to make sure Alaskans are safe,” Walker posted on Facebook. “My family is praying for yours.”

A tsunami warning was issued in the Cook Inlet following the quake, but was cancelled just after noon local time.

The magnitude 7.0 quake was recorded by the U.S. Geological Survey at 8:30 a.m. local time. As of 8:55 a.m., nearly 200 people had reported to USGS that they felt the quake, ranging from very light to moderate intensity.

Shortly after that quake, at around 8:35 a.m., a magnitude 5.8 aftershock was also recorded near Anchorage.

Both quakes had epicenters about 23 miles deep.

Because the quakes caused widespread liquefaction of the Alaskan soil, the state’s infrastructure was hit hard.

“Make no mistake, this was a big one,” [GOP Sen. Dan Sullivan] said, citing a serious concern regarding transportation impact. “Right now the highways in and out of Anchorage, with the exception of one going up north, are cut off and that’s a big problem for us.”

…In one update on Friday afternoon, AP said Anchorage Police Chief Justin Doll was recounting reports that parts of a scenic highway that heads from Anchorage toward mountains and glaciers have sunken and “completely disappeared.”.

He said officials were evaluating the damage to the Glenn Highway, but some was viewed as so significant that it will probably “take a long time to repair.”

Doll also said damage to bridges has been reported.

An AP reporter working in downtown Anchorage saw cracks in a two-story building after the quake.

Former Vice Presidential candidate Sarah Palin indicated that her home was among the many structures damaged.

???????? for Alaska. Our family is intact – house is not… I imagine that’s the case for many, many others. So thankful to be safe; praying for our state following the earthquake.

However, Alaska isn’t the only site of recent, intense geologic activity.

Earlier this month, the planet “rang like a bell” and scientists are still trying to determine what caused the unusual activity.

On the morning of November 11, just before 9:30 UT, a mysterious rumble rolled around the world.

The seismic waves began roughly 15 miles off the shores of Mayotte, a French island sandwiched between Africa and the northern tip of Madagascar. The waves buzzed across Africa, ringing sensors in Zambia, Kenya, and Ethiopia. They traversed vast oceans, humming across Chile, New Zealand, Canada, and even Hawaii nearly 11,000 miles away.

These waves didn’t just zip by; they rang for more than 20 minutes. And yet, it seems, no human felt them.

Only one person noticed the odd signal on the U.S. Geological Survey’s real-time seismogram displays. An earthquake enthusiast who uses the handle @matarikipax saw the curious zigzags and posted images of them to Twitter. That small action kicked off another ripple of sorts, as researchers around the world attempted to suss out the source of the waves. Was it a meteor strike? A submarine volcano eruption? An ancient sea monster rising from the deep?

“I don’t think I’ve seen anything like it,” says Göran Ekström, a seismologist at Columbia University who specializes in unusual earthquakes.

Finally, an earthquake struck near Buenos Aires as world leaders gathered for the G20 Summit.

The 3.8-magnitude quake struck 33km south of the city, according to the European Mediterranean Seismological Centre, where a number of those present at the gathering reported hearing a rumbling sound before seeing “the chandeliers sway slightly”.

Reports do not indicate that President Donald Trump has been blamed . . .  yet. However, as “experts” have previously connected climate change to earthquakes, you can be sure it will only be a matter of time.

Earthquake in Alaska. Wildfire in California. Hurricane in the South. But Trump is too intelligent to believe in climate change.

Wasn’t thinking of “good vibrations” yesterday at 8:30 and being 10 miles from epicenter. Having lived in SoCal, I nailed the guesstimate at 7.0. Yep…. as President Trump said… a “big one”.

Response at community along with local, State and Federal government levels kicked into gear immediately. Inspections on infrastructure along with repairs continue today. It will be harder going into winter than the 100x more powerful quake in 1964 which was in the spring… but the weather has been very very temperate this year which will help.

Ves… extremely temperate but the main populated area is in a maritime environment with the Japanese Currents moderating things. “Global Warming?”… if you live in Fairbanks you support global warming when it’s -50F.

The major infrastructure is intact, 40 miles from epicenter, my house suffered an old candle falling off mantle… while those closer had shelves fall, dishes break…plaster crack… all fixable. However, a moment of silence is needed for all those liquor and wine bottles that fell from shelves at the numerous liquor stores. A lot of fine stuff is gone.. and since alcohol is in the mainstream and bloodstream of deplorable Carhartt loving Alaskans… this a sad loss.

There is a large group of competing Scientist, who are promoting an Anti-Thesis presently accepted as fact, that of Global Warming.

This is referred to as Global Cooling (imagine that) and is based on the concept of the Grand Solar Minimum, which is based on the proposal that the Sun’s behaviour (cycles) effect the Earth.

They propose that we are entering a “cooling” phase, for numerous scientific reasons having to do with the actions of the Sun, the orbit of the Sun (yes, it moves to), the orbit and tilt of the Earth, orbit of the Moon, etc. etc.

If you want to study this idea, start watching YouTube videos about “Grand Solar Minimum”, or “Mini Ice Age”…it will take you a while to get up to speed with the Science behind it, but it is very interesting….and explains better what is happening now…even Volcanoes and Earth Quakes on Earth are effected by Solar changes…the SUN is really big, by the way.

The dummy in the driver’s seat of that Tesla which just passed Mars is missing a passenger.

Was thinking of AOC as passenger.

Alaska Daily News (ADN) has good pics of damage up here. Eagle River and northern parts of Anchorage got hammered. Still, years of engineering and preparedness made the difference up here.

Ocasio-Cortez’s Election Just Like Moon Landing (According To Ocasio-Cortez):
https://www.redstate.com/slee/2018/11/30/ocasio-cortezs-election-just-like-moon-landing-according-ocasio-cortez/

FYI The hypocenter was 23 mi. down. The epicenter was at the surface.