“A dozen Antifa thugs jumped two latino Marines in Philly, accusing them of being ‘Nazis’ and ‘white supremacists’ while calling them ‘spics’ and ‘wetbacks’ at the same time” 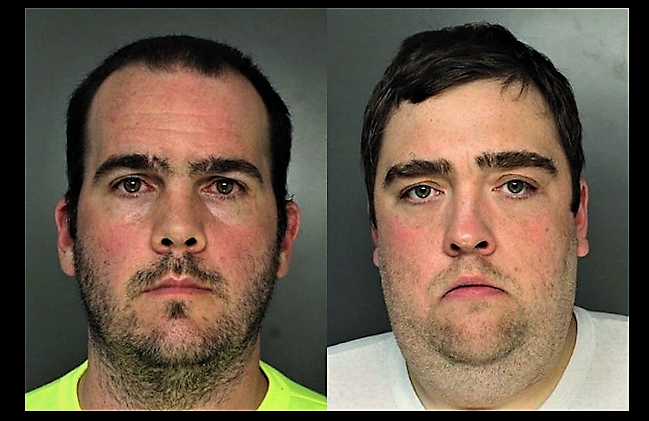 United States Marines Alejandro Godinez and Luis Torres were viciously attacked by an angry mob of Antifa fascists in Philadelphia on November 17, 2018.

They appeared in court on Thursday and revealed the details of their harrowing ordeal.

The marines, Alejandro Godinez and Luis Torres, both testified in uniform about the incident, while three marine officers, including their commanding officer, stood in the gallery. The suspects, Thomas Massey and Tom Keenan, who have been linked to antifa on websites and social media, sat together with their individual lawyers and did not speak. [emphasis in original]

The marines, who are not from the Philadelphia area, said that they had traveled to the city with other members of their helicopter unit, headquartered at Fort Dix, to attend a Marine event that night at a local hotel ballroom. They said that they had no knowledge of the nearby rally, which drew members of the alt-right as well as a large number of counter-protestors, Keenan and Massey reportedly among them.

According to the marines’ testimony, they were touring historical landmarks near Front and Chestnut streets when suspect Thomas Keenan approached them. Godinez testified that Keenan asked them “Are you proud?,” to which Godinez remembers responding “We are Marines.” Torres said that he remembers Keenan asking “Are you Proud Boys?,” an allusion to one of the alt-right groups behind the rally, and one that Torres said he didn’t understand. “I didn’t know what Proud Boys meant,” he said.

Whatever Keenan said, both marines testified that Keenan, Massey, and approximately ten other people — men and women, some masked and some unmasked — then began attacking them with mace, punches, and kicks, and calling them “nazis” and “white supremacists.”

On the stand, Godinez said that he was “bewildered” by being called a white supremacist and immediately cried out, “I’m Mexican!” After that, as the attack continued, both men said that members of the group, including Keenan, repeatedly used ethnic slurs, including “spic” and “wetback,” against the marines. (There was no testimony that Massey used any such language).

Godinez testified that he was maced at least six times, hit in the head, and kicked in the ribs, and he said that while he was being “stomped,” members of the group, which the judge and the district attorney’s office have both referred to as a “mob,” chanted “fuck him up” over and over again.

The report continues, so be sure to read the whole thing.

We sent @VictorFIorillo to court today to hear testimony from the two @USMC Marines who say they were attacked by an "Antifa mob" that include Tom Massey and Thomas Keenan, pictured. https://t.co/D3Cmeo0SUA #antifa

The alleged perpetrators are scheduled to appear in court again on December 27th.

After Godinez and Torres testified and the defense lawyers made brief arguments, the judge ruled that both men would be held for trial on aggravated assault and conspiracy charges — both felonies — as well as several misdemeanors. The judge also added a felony charge of ethnic intimidation against Keenan. Their next court date is December 27th.

Do you see why CCW is so essential to modern life in urban areas? New Jersey is among the most Draconian antagonists against self defense. Going into Philadelphia is a known hazard. Going unarmed is done so at one’s own peril.

Just one little nit to pick here. Philadelphia is in Pennsylvania, not Jew Jersey.

Haha, yeah I have heard that before! Thanks 🙂

12 on 2 isn’t good odds, but I hope the Marines fought back.

…and they need to get a shave, too!

That picture and the first paragraph threw me off too, but then I did a reverse image search of the pic because no way those fat-body unkempt slobs are active duty US Marines. The above photo is of the actual suspects, and not the Marine Corps victims.

That was just really poor photo placement by the author of the post and whose first paragraph seems like it’s a photo-caption which will continue to cause confusion.

Had a feeling about that donut hog on the right. And the guy on the left is too grubby.

Imagine if this was a 2 on 2 fight with the two marines? Now THAT would be fun.

Fine, is this really confusing? I can maybe add some text to indicate they are the perps and not the Marines. To me, it’s pretty clear at a glance that these two guys are NOT United States Marines, and there’s the embedded tweet with the exact same image stating that these are the accused Antifa. But if it really is confusing, I will see what I can do.

I added an edit to clarify that these two fat, unkempt slobs are not, in fact, active duty U. S. Marines. 🙂

Jokes aside, I do see how it can be confusing. Thanks, and fixed.

The headline says “Two Marines” and “Antifa Mob”. Next are photos of two people. There is no photo of a mob, therefore no cue that the two pictured are not the two victims.

A headline more like “Two Antifa Miscreants Charged in Attack on Two Marines” would leave open an obvious possibility that the two pictured are the attackers.

I am neither a lawyer nor a Marine, but my understanding is that Marines (and other active duty personnel) are under strict orders not to respond even if provoked. It’s why protestors can spit on returning servicemen in airports and get away with it. I’m not sure how their orders cover being outright assaulted, although the mob may have rushed the Marines before they could effectively react.

Considering that we’re prosecuting troops who defend themselves in combat zones, the Marines are in the same position as the Chicago police Lt who decided she’d rather take a beating than put herself and her family through the hell that would result if she shot the perp.

Color is a low information attribute. Diversity is divisive.

Not a breath of this in major media other than Fox. I suppose it’s not news because it’s not surprising.

It’s not news because Antifa is a leftist organization, the same as the MSM; they don’t like to run negative reports on their own.

What “major” media? You mean the democrat media, don’t you?

I believe there are holding facilities at Camp LeJeune that the Marines would make available to these Justice Warriors.

They should be sentenced to six years in the USMC!

No!
Six years in a redline.

To DaveGinOly: the Corps is an honorable institution and has not use for street trash.

Lock them up.
The only way to stop these Antifa goons is to throw the book at them and put them in jail.

I long for the day where I read 12 AntiFa thugs jumped on 2 individuals, and the individuals responded by filling all 12 thugs with lead.

You really would not need to shoot them all. At the first sight of blood, from one of their own, they would be fleeing as scalded rats.

You can purchases pocket size cattle prods at Tractor Supply. Just the thing to focus their attention.