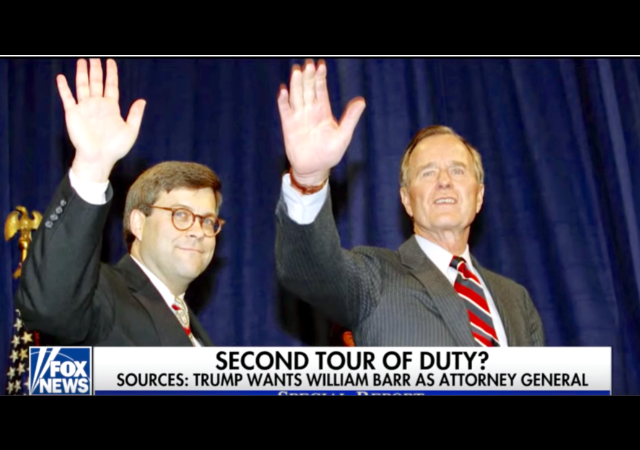 William Barr served as attorney general under President George H.W. Bush and he may have an opportunity to return to his old job.

President Donald Trump announced this morning that he will nominate Barr for attorney general to replace Jeff Sessions.

Trump told reporters that Barr “was my first choice since day one” and that he thinks “he will serve with great distinction.

Mr. Trump said that Mr. Barr is “respected by Republicans, respected by Democrats,” adding that he hoped the nomination process “will go very quickly.”

Mr. Barr would be a more conventional choice than some other candidates the president considered, according to advisers and people close to the White House, and would likely face better confirmation odds in the Senate. But his appointment is unlikely to quiet critics of the acting attorney general, Matthew Whitaker.

Barr has voiced criticism over Special Counsel Robert Mueller’s probe into possible collusion between Trump and Russia in the 2016 election:

Mr. Barr has also called for “more balance” among the prosecutors working for Mr. Mueller, noting that some of them have made political contributions to Democrats. Mr. Mueller is a registered Republican. Mr. Barr also publicly supported Mr. Trump’s call last year for the Justice Department to investigate 2016 Democratic presidential candidate Hillary Clinton, saying there was “nothing inherently wrong” with such a call. Presidents typically avoid public calls for investigations to avoid the appearance of interfering with matters of justice.

Why put in a DC establishment guy? Will he go after the swamp?
I’d rather have Joe DiGenova!

It’s getting clear that Trump is deciding more and more to more wisely pick his battles. DiGenova confirmation would probably make Kavannaugh’s look like smooth sailing.

Plus Trump is probably hoping to use whatever level of contest the Dems put up to highlight their hypocrisy. It seems Barr was well accepted in Dem circles for a long time, for example.

Not a swamp-draining fire-breather. A 41 alum who can get bi-partisan support.

Effectively every Democrat in Washington D.C. views bipartisanship as “we win, you lose”. Better to have appointed an AG who would start prosecuting and jailing Democrats rather than bending over for them. It appears easy to convict people for process crimes if no threaten them sufficiently for a guilty plea.

Won’t this fellow prove about as conservative as Wray, a complete deep State operative apparently employed to hide illegal and clearly unjust corruption at the FBI/DOJ?

Wouldn’t surprise me. But that won’t stop Democrats from going Full Kavanaugh on him anyway.

For those who don’t cotton to Barr how about if DJT had nominated the New Jersey Dough Bioy?

TRUMP should nominate the best person for the Republican side, with the intentions of intentionally upsetting the Democrats as much as he can.

The more the Democrats act like Democrats, with their infantile rants and insults, the better for TRUMP and us.

At least they will HATE this guy simply because he is a White Male! God help him if he is married to a woman and goes to any Christian Church….God help him in that case.

My only requirement personally for an AG is someone who can fairly look at all that comes before the DOJ and uphold their oath of office. Someone that does not have to recuse himself and someone who will treat the SC investigation with the same impartiality as an investigation into HRC. Democrats can either let this nomination go through with little fanfare and drama, or they can prove once again to the American People that they only seek to stop PDJT regardless the cost. The ball is in their court.

They will attempt to stop TRUMP at any and all costs. That is the only thing they have to offer…no lower taxes, no borders, no right for a woman to defend herself, no love of children, no freedom of choice, no freedom of association, no freedom of speech…nothing but hate.

(I used to not speak this way, but watching the “other side” say whatever they want, regardless of rudeness, has granted me the freedom to be just as obnoxious, intolerant and fanatical. The difference is, I acknowledge and admit to being that way, while “the others” think they are so pure and reasonable)

This appears to be a sensible, reasonable selection of an ethical, honest man.

The way the Left is reacting right now only shows how intelligent the pick is. Heads are exploding, year books are being examined, and the Dems are screaming like… well, something that screams a lot.

I want to see him in office before the end of the calendar year.

Not seeing or hearing any ‘splodey liberal heads.

And they can’t go back to the yearbook – one of the better aspects of nominating Barr is he was already confirmed once before. Takes the Kavanaugh option entirely away.

I’ll give this guy 6 months, and if he maintains status quo, it’s over.

Kavanaugh had also been confirmed once.

Not to the same position.

If they want to try that, the built-in defense is, “What’s changed since last time?”

They can just say we wouldn’t have consented last time either.

Sure they could, and they would look idiotic in the process, and be laughed out of the hearings.

They already approved this guy once. Nothing has changed, other than leftists going completely neocommunist.

Hope Trump can escape with his hide. Omens are bad.

This is not looking good.

Went to Columbia with him. Delightful fellow.

Ironically, he has a younger brother named, of all things, Hillary!

I wonder why he (Barr) took the job. He had a successful business career and is with a BIG law firm, so what’s the motivation? Was everything else a letdown after the challenges of USAG?

Time will tell if he disappoints like Sessions did, but even Sessions was better than the Holder/Lynch clone we would have gotten from president Hillary.

The plan, at least as I envision it, was:
Hillary ==> POTUS
Lynch ==> SCOTUS
Comey ==> Attorney General
McCabe ==> FBI Director