There is hope yet 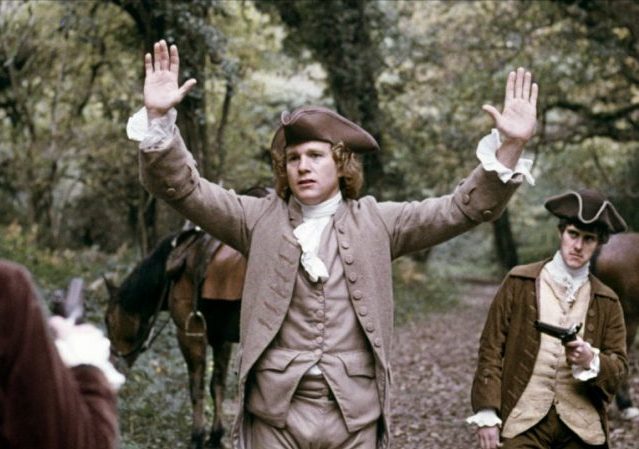 There was a recent tweet by filmmaker and professor Brandon David Wilson that was shared by director Guillermo Del Toro that sparked an interesting crystallization. 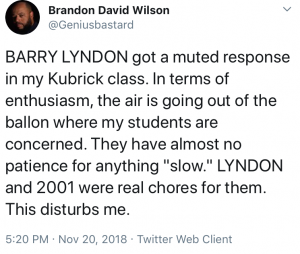 “BARRY LYNDON got a muted response in my Kubrick class. In terms of enthusiasm, the air is going out of the ballon where my students are concerned. They have almost no patience for anything “slow”. LYNDON and 2001 were real chores for them. This disturbs me.”

It’s a well documented and valid facet of discussion to dismiss millennials for their jumpy attention spans. Having sat through a half dozen Millennials in the Workplace videos in my career prep college classes, it’s clear that older generations and younger generations aren’t on the same page.

The Politicization of The Millennial Generation

Naturally, the Progressive reaction is a half-hearted defense of millennial eccentricities. How dare older generations judge young people for wanting more for less work? It’s not like older people had to work their way through college and live through significantly more tumultuous life events like the Vietnam War and a dozen economic crashes to understand what a Millennial struggle with when they realize their Associates Degree in Art Theory won’t land a six-figure paying full-time job with benefits.

That being said, Generation X didn’t set up Millennials all that well. GenX skewed the traditionalism and order that the Reagan generation earned for Americans in favor of the lukewarm neo-liberalism of Whole Foods and Twitter. GenX mistook saying you did a good thing as equivalent to doing good things from a moral perspective (morality being non-objective anyway so who is really keeping track?). As result, divorce rates spiked, half the millennials now have PTSD, anxiety, and candidates like Bernie Sanders are gaining power because my generation doesn’t care about freedom if you don’t get overpaid by it.

Progressivism loves Millenial eccentricities because the millennials will bend over backward for them on the bread and butter social issues that have come to define the left. They’re also the first generation to prominently and seriously question base assumptions like capitalism and traditionalism since the hippies tried and failed. While this embrace can be good as millennials are one of the least judgmental and prejudicial generations in history, they’ve also proven to be overly reflexive and willing to jump onto radical ideologies their parents never would have dreamed of. Hyperbole and disdain aside, Millennials live in a world all their own. It’s quite a lovely fever dream.

The disconnect between the Millennials and the past is a very real phenomenon that most people have experienced anecdotally. As the tweet above shows something about the Millennial attention span has even progressive filmmakers concerned as they struggle to translate vital classics of cinema that young filmmakers need to study to understand the medium. Any student wanting to understand film needs to watch Stanley Kubrick films to see his ambition and mastery over the craft.

The Science of SpongeBob

What is the cause of disconnect? If you were to take a 2011 study serious you’d believe the answer was SpongeBob Squarepants. In a 2011 University of Virginia study, 60 infants were sat down to perform one of three activities: 9 minutes of drawing, watching a slower-paced PBS cartoon Caillou or watching an episode of SpongeBob. When the infants had their impulse control and cognitive capacity tested afterward, the students watching SpongeBob all tested worse.

Having experienced my generation’s very real nostalgia for SpongeBob Squarepants, it isn’t surprising that the lot of this young generation is having attention span issues. Most of them can spout quotes verbatim with disturbing accuracy. Try walking up to one of them and saying “people talk loud when they want to act smart“. The Pavlovian response should provide a loud response of “CORRECT!”

Though anecdotally unsurprising, the study was criticized for its conclusions by other researchers. While the study showed that fast-paced entertainment did temporarily impair cognitive abilities and attention following the experiment it failed to show evidence of long-term psychological damage.

The problem with this criticism is that it ignores a basic truth about millennial life. Millennials as a whole have become trapped in a state of arrested development. Most young people still watch cartoons regularly. Most young people still have avid and enthusiast support for animated programming like Rick and Morty, Steven Universe, Avatar: The Last Airbender and SpongeBob itself which is still releasing new episodes.

Beyond that the number of millennial adolescents that aren’t cell phone/computer addicts is sparse. The whole of millennial life is a cocoon of gratification and comforts.

The brain is the most powerful muscle in the human body. It’s very sensitive to chemical changes and reactive to physical phenomena. While it’s possible to reshape its habits with repetition, it’s very easy to get caught in dangerous addictive ruts.

As parents, the best thing you can do is disconnect your children as much as possible from technology. Technology is here to help us but it’s addictive. I see young children being given iPads and Nintendo Switches at a disturbingly young age. The millennial generation became addicted to Nickelodeon, AOL Online and Xbox as children and those certainly aren’t as all-encompassing as the ones we have now. There is nothing wrong with technology in moderation.

Television, iPhones, and internet unquestionably make life much better. Like anything else though they need to be taken in moderation. This is especially true during the formative years of a child’s development. The effects of short attention span can heal but only if you can add moderation into your children’s lives.

If you’re already a dysfunctional Millenial with a fried brain like me, the best thing you can do is detox. The less reliant you are on technology and the more you challenge yourself to read/study slow/difficult works of art the more they will open up to you. You’ll be uncomfortable at first but you’ll begin to enjoy it. I can tell you that getting to see 2001: A Space Odyssey in theaters this year was one of the most engrossing and powerful cinematic experiences of my life and I wouldn’t have appreciated it if I hadn’t worked at making myself more patient.

I read the first sentence but then got bored. Do you have a short TL;DR summary of that posting instead?

Nah, just kidding. I myself have seen the decrease in the young’s attention span – and I’m under 60 years old.

Life goes in cycles. It took a while for me to realize that fact. I am interested in Gen Z and to see how they turn out. The Left thought they won in the late 60s – 70s with tune in tune out turn on and other new age hippie BS. It was also a time of intolerance where everyone was separated by what they were (race, age, sex) and victimhood was rampant. The Left also pushed basket weaving classes (literally) as a way to your future (with tons of can’t get job degrees). Then the 80s happened and all the kids who grew up watching the Left crow and be Pfffft came of age and pushed back hard. If it is to happen again we should start seeing it with Gen Z

I’m 61 and my first thoughts were this: “Whoah, Barry Lyndon!!! The most beautifully filmed move ever made! Every scene, when taken as a still, is like a pre-impressionist realist landscape or still-life…” Then I saw all the words and realized I’m going to have to read all this???? What’s on tv? Gotta go.

Does SpongeBob have an episode on what to do if one fails?

But Kubick is boring. Deadly tedious, dull, drab and awful. He showed some signs of life in his early days, with The Killing (1956) and Spartacus (1960), but signs of his later lapse into dynamic torpor were clear by Lolita (1962). Dr Strangelove (1964) was a temporary reprieve, but he collapsed into terminal confusion and tedium with 2001 (1968) and drove a stake through it with A Clockwork Orange (1971). (I never managed to sit through Barry Lyndon, certainly not in 1975 and probably not now.) Somebody tried to salvage the tedium of The Shining with a far shorter cut for European release, but it didn’t help.

I’m a long way from a Millennial, but the little buggers are right; slow is one thing, but tedium is unbearable. Can’t blame them for being right.

I suspect stories like Barry Lyndon require some knowledge of the period being portrayed.

Brandon David Wilson needs to learn how to spell. Ballon???

2001 was boring! I saw it when it first came out, but was not fortunate enough to see it in the Cinerama theater. So, the ooh-ahh factor wasn’t there. I was bored out of my mind.

My date said she thought the movie was 45 minutes too long, but that it felt like the projectionist had left out one reel.

If a millennial had cancer and the cure was watching barry lyndon, the’d be dead. That is called darwinism.

Tom, that’s fair. People go to see movies for different reasons. Some go for the entertainment, some for the story telling, and others for more technical reasons. Kubrick was, I believe, more concerned with the visual and technical aspects of the film and film making process. For example in “Barry Lyndon” he employed one of the most light-gathering lenses ever made – it was borrowed from NASA – to film a scene lit only by a candle. On the other end of the spectrum, he was known to employ millions of candle-power to wash other scenes with light. In “2001” he came up with creative solutions to things like an artificial gravity in a rotating space craft, and Bowman’s reentry through the hatch.

Perhaps if you viewed his films from a technical perspective you might find something you like, and if not, there are plenty of choices out there. (And you forgot “Full Metal Jacket” and “Eyes Wide Shut” [eh], but kudos for “The Killing”.) Happy New Year!

To be fair, I believe MAD Magazine did a bit called ‘Barry Longdon’ when that movie was out…

I’m not entirely on board with the millennial bashing. There have been more sub 4 minute milers at the high school level (and runners close to that) in the past 20 years than ever before. In 2012 alone the number that went below 4:05 was staggering.

Our own daughter is young, but she’ll easily surpass all I’ve accomplished. I compare her to myself at that age and she is way ahead of where I was.

The masses might be just as dumb as ever, but the best are getting better like never before.

How exactly does a fast mile time equate to cognitive deficits that are perpetuated by cultural programming and unintended side effects of technological advance?

At best, your “point” is a tangential anecdote.

Short attention span is the reason why most Millennials are not drawn to science.

Math, programming, and other engineering-related fields require attention to tedious and long tasks.

“Millennials as a whole have become trapped in a state of arrested development…. The whole of millennial life is a cocoon of gratification and comforts”

Huh. So the offspring of the “Me-Generation”, who equate arrested development with being youthful and cool, have offspring who value what their parents value.