Bill heads to the House 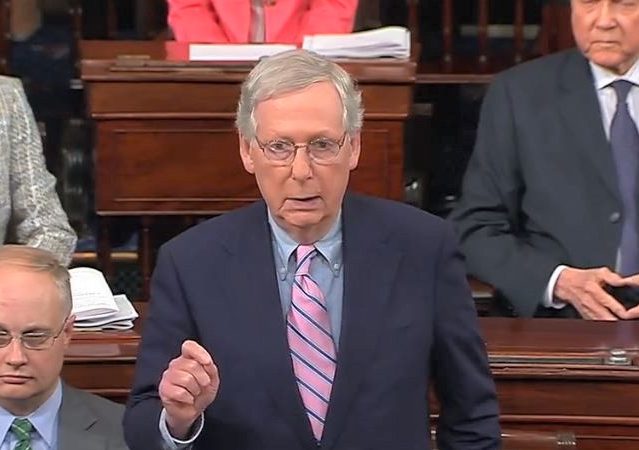 At the eleventh hour, the Senate passed a stop-gap spending bill that will fund the government until February 8. The bill heads to the House, who is expected to pass it, and then onto Trump.

With bipartisan support, the Senate approved legislation that would extend funding for several major government departments until Feb. 8, a measure that would avert a partial government shutdown at the end of the week but does not include any new funds President Trump sought for a wall along the U.S.-Mexico border.

The House will vote next on the stopgap measure, and lawmakers say they expect Trump to sign it. But the White House has not confirmed the president’s stance on the deal, which would punt the next round of wall funding negotiations until after Democrats take control of the House.

According to Politico, the Senate will remain in session Thursday as they await the House vote.

Senator Cruz opposed the resolution and released the following statement:

“The American people gave us a clear mandate: secure the border and build the wall.

“I have long called for building a wall as a necessary step in defending our border and stopping the flow of illegal immigration into our country. To that end, I introduced the EL CHAPO Act and the WALL Act – two bills that would offset the cost of completing the wall and securing our border.

“Unfortunately, this continuing resolution fails to reflect these priorities by not sufficiently securing the border. This is a missed opportunity to deliver on the promises made to the American people. Further, this bill continues to fund sanctuary cities, which are defying the law and making Americans less safe. We should instead pass Kate’s Law, a bill I introduced that would put criminal illegal immigrants in jail so they cannot prey on innocent Americans.

“Congress must do better. I will continue to fight for a better path that respects the will of the American people.”

I would have preferred they shutdown, they would cause less damage that way.

If Trump has any balls he will veto this crap! Shut ‘er down!

McConnell’s “stop gap bill to prevent government shutdown” was yet another sell-out to avoid a vote on the wall before the Dems take over.

Trump is already signalling that he has given up on Republicans with his “I will not sign Democrat bills without funds for border security” statement last night.

The uniparty is winning. Gohmert isn’t helping either by laying it all out with his “I don’t see Trump winning re-election without wall”. That is why the Dems are celebrating. What Gohmert should have said is that he expects to see an avalanche of Republicans being primaried out of office in 2020.

The GOP continues to circle its wagons in defending Democrats. THAT is the message we need to focus on. Giving up on Trump is surrendering to the globalists. There is no longer separation of powers in this administrative state. The uniparty bureaucracies are the legislators (closed door deals with big money cronies), administrators (regulating without consent of Congress) and judiciary (capriciously deciding on who to enforce laws and regulations against).

The democratic process and so the consent of the people are relics of the past. That is why Pelosi was dancing at the bar. Thank you NeverTrumpers! Biggest scumbags of all!

I disagree. Trump should fund the stop gap and surprise them. They think he won’t and can use it to blame him for shutdown. Once Dems are in power in the House, they cannot play that card any more.

I thought spending bills had to originate in the House.

They take some poor, innocent bill with no real contents and strip it out, leaving only the title (which is then modified to fit a budget) before putting the Senate’s contents inside. Yeah, it’s *technically* legal, totally unethical, and the way the Senate has done business for about fifty years so far.

It is not technically illegal, and to the best of my knowledge this is standard procedure in every parliament in the world, and probably has been since before the constitution was written.

And that is why we don’t have a parliament, thank goodness. We have a bicameral legislative branch with very reasonable and necessary checks and balances. Including having bills regarding the spending of the people’s money generated in the people’s house.

It is against my nature to agree with Millhouse, but he is correct. It isn’t illegal. It should be – they are in essence subverting the provisions of the Constitution that require bills that appropriate money to originate in the House of Representatives. We need a Liberty Amendment to “clarify” this practice and outlaw it.

Obamacare, containing a tax according to Roberts, started in the Senate. But hey, who really cares about those pesky rules?

You have it backwards. Spending bills don’t have to originate from the House, but “Bills for raising Revenue” (tax bills) do,

Article I, Section 7, first paragraph “All Bills for raising Revenue shall originate in the House of Representatives…”

When Justice Roberts called ObamaCare a tax, he should have noted that it started in the Senate and was therefore unconstitutional! But, since he was effectively rewriting ObamaCare calling it a tax when its authors claimed it wasn’t a tax to get it passed, I doubt “Justice” Roberts was worried about being Constitutional anyway.

Maybe something for the COS to consider.

There is a good chance this will be remembered as the time when Trump lot his reelection bid. The government gets another bloated spending bill, and we get wind for a wall.

Trump supporters have to put up with being driven off social media, attacked in public, having business accounts yanked, and threats of physical violence. And they do that willingly as long as they think Trump is fighting as hard as they are. But if he can’t shake out a measly $5 billion in a budget the size of ours then the calculus changes.

Everyone else has had their priorities serviced except for those who elected him. He needs to come through here, and he blew the only time when he will have the leverage to do so. The Dems will have the House now, and he can’t threaten a shutdown next year because it will be the start of election campaigns. So once again, every single one of these bastards up in DC are conspiring to show us just who is boss by denying us a wall for the sole reason that we want it, while the donor class does not.

It’s only a paper moon, sailing over a card board sea….

If Trump was serious about a wall he would have vetoed any one or more of numerous previous appropriations bills. If he doesn’t veto this one, you are correct, this will be the forfeiture of not only a second term but any impeachment resistance from his supporters

Banning bump stocks and requiring them to be turned in or destroyed isn’t helping him either. The people who own bump stocks are the kind of people who voted for him and would have done so again. To tell them to destroy something they paid $200 for isn’t going to go over well.

STOP THIS!! Why do we allow the Congress to keep passing these questionable Continuing Resolutions? They are elected, and by law, should be writing Budgets! What else do they have to do? Spend countless hours getting re elected, passing crap Post Office naming Bill’s? Stay in session until all Constitutional mandates are completed.

The Turtle is a rat.

The time to fight about the numerous budgets is in August and September. Not this late. This sort of crap over and over and over disgusts me. The GOP have controlled Congress since 2014 and the only thing they have ever funded on time is DOD for FY19. Trump really needs to veto this and shut it down. Don’t accept a bill until it funds the remainder of the fiscal year and the entire wall. You know the Dem House isn’t going to put the wall in there come February. McConnell and Ryan just conceded. Again.

The Vichy provisional government doesn’t care what you think anymore.

I remember when the Senate went Republican there was huge talk about “regular order”, i.e. hearings, mark-up, debate, amendments, vote, conference, final vote. CRs are the mark of spinelessness and they throw the whole government expenditure routine into chaos (limits on funding, spending on old projects, etc.). Guess that was just election rhetoric, rather than a serious effort to get government back to working according to a reliable, predictable process.
Personally, a government shutdown is relatively minor. There was a very recent report that 86% of government expenditure is on auto-pilot (Medicare, Medicaid, SS, all the other entitlements) — that’s another responsibility dodge by the way. So “shutting down” the government means some workers will be furloughed and your taxes won’t get filed/audited, etc.
If Trump wanted to do what Obama did during the last one, he’d target the shutdown to affect the Senate and House. Furlough everyone who deals with Congress, and shut down Reagan Airport. Watch them squeal.

Thank goodness the government is funded!!
Now I can sleep better at night knowing that we are secure as a nation and Nancy andChuck and Mitch will all receive their paychecks on time.