RIP – Penny Marshall Passes Away at 75

RIP – Penny Marshall Passes Away at 75 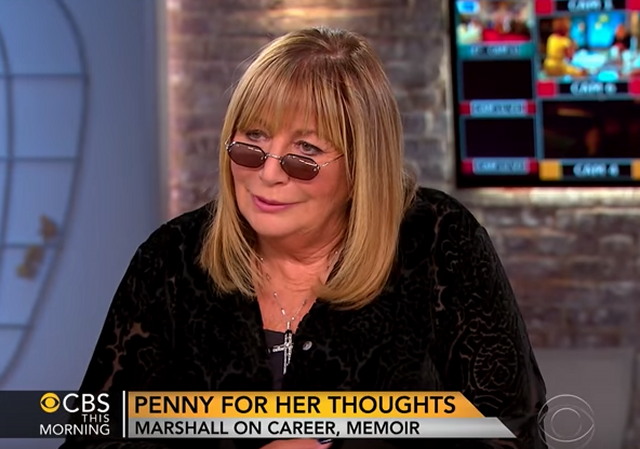 TV star turned film director Penny Marshall passed away on Tuesday at 75 due to complications from diabetes. As a performer, she was a natural in comedy, as a director she enjoyed even more success, and her career spanned decades.

If you were around in the 70’s, you’ll remember her as Laverne DeFazio who drank milk combined with Pepsi and worked at the Shotz Brewery in Milwaukee with her roommate and best friend Shirley Feeney, played by Cindy Williams.

The duo had tremendous chemistry and reached heights of physical comedy reminiscent of Lucille Ball and Vivian Vance on the ‘I Love Lucy’ show.

Mike Barnes of The Hollywood Reporter reminds us of the breadth of Marshall’s career:

Supporting herself as a secretary while studying acting, she appeared in commercials. Her first was a Head & Shoulders spot opposite the gorgeous, blond and then-unknown Farrah Fawcett; Marshall played her plain roommate.

After appearing on such shows as That Girl and Love, American Style, she and Reiner — mere months before they were to marry — auditioned for a new CBS sitcom. But while Reiner was cast as Michael Stivic, it was Sally Struthers who ended up playing his wife, Gloria, on All in the Family.

Marshall, though, soon joined her brother’s ABC comedy The Odd Couple as Oscar Madison’s flighty secretary, Myrna Turner. It was Jack Klugman, who played Oscar the sloppy sportswriter, who insisted she get the job.

Guest stints on such series as The Bob Newhart Show and The Mary Tyler Moore Show and a regular role on the short-lived sitcom Paul Sand in Friends and Lovers (created by Brooks and Allan Burns) followed.

In 1975, she and Williams — who had met on a double date years earlier during a Liza Minnelli performance at L.A.’s Ambassador Hotel — were working on a satire for Francis Ford Coppola’s Zoetrope magazine when Garry Marshall hired them for an episode of Happy Days…

Marshall moved behind the camera in 1986 to direct Whoopi Goldberg in ‘Jumpin’ Jack Flash’ but it was her next film that put her on the map as a film director:

She hit comedic pay dirt with her next film, Big (1988), the Tom Hanks starrer about a boy who wakes up in the body of an adult. Co-produced by James L. Brooks, who brought the script to her, it was the first film directed by a woman to gross more than $100 million (about $198 million in today’s dollars) domestically.

Another Marshall comedy, A League of Their Own (1992) — a fictional account about the real-life All-American Girls Professional Baseball League organized during World War II that also starred Hanks (as well as Geena Davis, Rosie O’Donnell and Madonna) — broke through the $100 million barrier as well.

This video goes all the way back to her shampoo commercial:

And of course, who can forget this?

Rest in peace, Penny and thank you for all the laughter.

Other than the character flaw which caused her to marry[*] Meatheat, she gets up votes all the way. *That error was rectified by divorce.

Back in the 1970s comedy TV series were actually funny. Today, with the exception of Last Man Standing, most are highly political.

She always came off like a decent person in real life. Goodbye Penny.

Laverne & Shirley was girls being, well, girls, and working ones at that. This included contending with life’s ups and downs. They were not rude, nor crude, and, as I recall, not even tattooed. Moreover, no nudity was involved. Yet, they were funny, funny, funny.

Part of the fun was they’re looking for Mr. Right. This was periodically interrupted by “Hello!” It coming from the pesky pair of Lenny and Squiggy, who were boys being, well, boys even if a bit zany. They forever had their hopes that some day Laverne and Shirley would be their dream girls. It seemed as though everybody knew this wasn’t going to happen but them.

Frequently mentioned is that Penny Marshall was the woman to direct a film that grossed more than $100 million. As laudable as this may be, the laughter the she and her other partners in crime brought into many. many lives far outweighs this.

When old toads like me say we long for the good ole days, persons like Penny Marshall are reminders of the goodness and wholesome which was a part of entertainment in our time. We do miss those times and the persons who comprised. Now, Penny Marshall has joined them. “The LORD gave, and the LORD hath taken away; blessed be the name of the LORD.”

One of the things that makes me a non-believer in the award shows is that a talent such as Penny’s was never honored.

I seem to remember reports that Ronald Reagan rearranged the timing for a speech, possibly the State of the Union, because it would conflict with Laverne and Shirley. I can’t find it, and some of the news sources are now behind a paywall.

Laverne & Shirley was funny, and I enjoyed it. I never knew anyone in Milwaukee who drank milk and Pepsi, and Laverne, Lenny, and Squiggy sounded to me like New York, not Milwaukee. But still, it was funny. I loved A League of Their Own.