POLL: Government is Country’s Biggest Problem, Guns at the Very Bottom of the List

POLL: Government is Country’s Biggest Problem, Guns at the Very Bottom of the List

“Current public perceptions of the most important problem facing the country provide additional insight into the looming shutdown. “

A new poll by Gallup illustrates how public opinion on issues like Obamacare and immigration have changed since the midterm elections.

One in 5 American surveyed now say that the federal government is the biggest problem with the country and were more likely to cite the government as problematic than any other issue. Even more interesting, guns sunk to the bottom of the list. 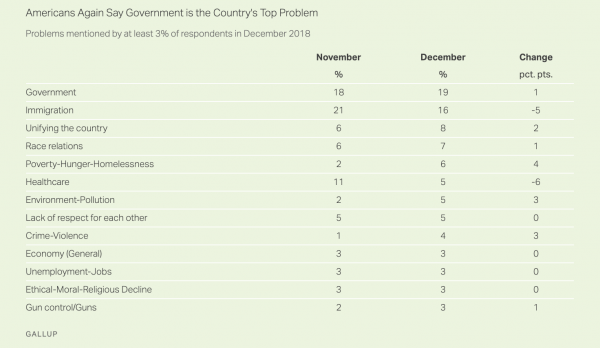 As another potential partial shutdown of the Federal government approaches, government is again mostly likely to be cited by Americans as the most important problem facing the country. However, the current level noting government dissatisfaction is still below the 25% who cited the issue in January of this year, a few weeks prior to the last time the Federal government faced a shutdown. That shutdown ended after three days.

Current public perceptions of the most important problem facing the country provide additional insight into the looming shutdown. President Donald Trump has demanded that Congress fund a border wall and said he would be “proud” to shut down the government over the issue. But Trump is doing so at a time when public perceptions that immigration is the most important issue facing the country have declined. This may indicate less support among Americans for a shutdown over funding for the wall than Trump would have had last month. However, this month’s poll ended on December 12, as a potential standoff on funding for the border wall was evolving, potentially impacting current perceptions.

House approves spending bill with $5.7B for border wall:
https://www.foxnews.com/politics/house-approves-spending-bill-with-5b-for-border-wall

Yes, guns are a big problem – when criminal illegal aliens have them.

Guns are an even problem when only the ‘authorities’ have them.

Government is always a problem. Bigger problem-when it shows itself as a threat which it has for the last few decades.

Problem with the poll is they’re asking the wrong people the questions.
They should be asking our “elected” officials what they’ve decided to spend their time on to further their political careers.
Voters don’t really matter and unless the seats are contested then polls really are a waste of time.
Anyone think chuck or nancy give a s*it about the polls?

One can not create a workers’ paradise like Venezuela or Cuba if the population can fight back. Failures of the Party are endured when the only option is attempting to escape.

This poll means … what, exactly? People think the government is too big? Too small? Too invasive? Not invasive enough? Too inefficient? Too efficient? Spends too much money? Doesn’t spend enough money?

Not surprisingly, Gallup spins this vague poll to favor Democrats (which is why it is so vague in the first place).

Grubernment is the only real problem in America!

“The scariest words in the English language are
I’m from the government and I’m here to help you!”

“Man is not free unless government is limited.” Ronald Reagan

For the Left. Trump is their greatest catastrophe. Lots of former Democrats jumped ship to vote for him. The Left cannot accept that their support for illegals, for useless Muslims, for generational Welfare Queens, for ObamaShitCare and a host of other issues, and so much more, created a perfect storm. They cannot accept that they are responsible for Trump winning.

Our biggest problem? Ethical-Moral-Religious Decline. All else stems from this.

We have a Congress that refuses to pass an annual budget – the ONE job they are Constitutionally Required to perform. They’d rather use the threat of government shut downs for political grandstanding. And “We the People” don’t bat an eye.