“Butina sought to establish unofficial lines of communication with Americans having power and influence over US politics.” 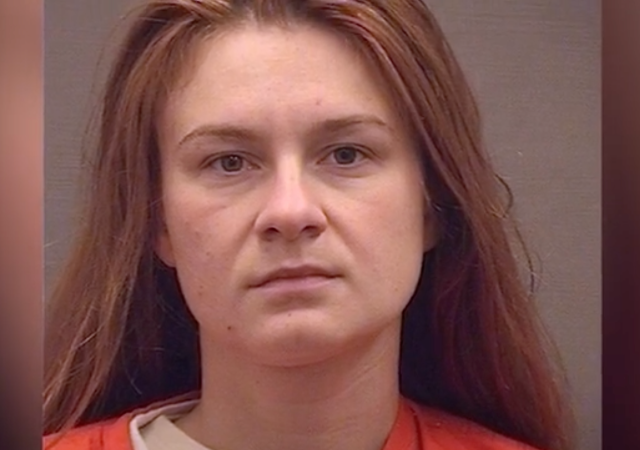 Alleged Russian spy Maria Butina has changed her plea to guilty of acting as an unregistered Russian agent and agreed to cooperate with the federal government. From CNN:

Butina, 30, was accused of working to infiltrate Republican political circles through groups such as the National Rifle Association to bolster Russian interests.

Butina said she acted “under direction of” a Russian official whom CNN has identified as Alexander Torshin. “Butina sought to establish unofficial lines of communication with Americans having power and influence over US politics,” the prosecutor said in court.

She faces a maximum of five years in prison and will likely be deported after serving any time.

Butina, along with lawyer, claimed her mind is “absolutely clear.” At the end of November, her lawyer insisted that solitary confinement and jail conditions started “to have a profound psychological impact” on her.

After making that known to the court, Butina has spent “time out of the cell at night and for other activities, including for church and to visit with a Russian orthodox minister, which has helped her mental state, her attorney Robert Driscoll said.”

A report from ABC News on Monday stated that Butina reached this agreement to plead guilty:

She admits, as part of the deal, according to a copy obtained by ABC News that is expected to be filed to the court, that she and an unnamed “U.S. Person 1,” which sources have identified as longtime Republican operative Paul Erickson, with whom she had a multiyear romantic relationship, “agreed and conspired, with a Russian government official (“Russian Official”) and at least one other person, for Butina to act in the United States under the direction of Russian Official without prior notification to the Attorney General.”

Based on the description, the “Russian Official” appears to be Alexander Torshin, deputy governor of the Russian Central Bank and a close ally of Russian President Vladimir Putin. Under his direction, the agreement said, she “sought to establish unofficial lines of communication with Americans having power and influence over U.S. politics.”

The agreement, which Butina signed on Saturday, Dec. 8, also notes that the conspiracy charge carries a maximum penalty of up to five years in prison, but the deal could see Butina receive a lesser sentence, depending on the level of her cooperation, before likely being deported back to Russia.

ABC News reported that the agreement shows that with the help of U.S. Person 1, “she drafted a proposal called ‘Description of the Diplomacy Project’ in March of 2015 which was later sent to the Russian Official, in which she said that she had already “laid the groundwork for an unofficial channel of communication with the next U.S. administration” and requested $125,000 from a Russian billionaire to attend conferences and meetings to further develop those ties.”

U.S. Person 1 then introduced Butina to people that wield influence in our political system, “including high-ranking members of the National Rifle Association and organizers of the National Prayer Breakfast, that would ultimately give her a surprising level of access to conservative politicians, including — in one memorable interaction captured on video — to then-candidate Donald Trump.”

Butina’s Russian gun rights group hosted people in the NRA in Moscow in 2015, which led to meetings between them and Russian Foreign Minister Sergei Lavrov. Butina sent a message to her handler, “We should let them express their gratitude now, we will put pressure on them quietly later.”

I can see the headline “NRA works with Communist Agent to Halt Common Sense Gun Control” Sub-head: “Endangers School Children Everywhere with Plan to put Armed Terrorists in every school”

What is missing are all the charges Mueller’s crew initially leveled. What is in is the Person 1 nonsense. The DOJ is a pig pen of injustice. This arrest was nothing but a Russian style show trial and absolutely meaningless, merely intended to get the word “Russian” in the headlines.

Republican as in old guard Republican. The people who are being pushed out by Trump.

A good bout of solitary, and a “confession.” Yep, Russians know all about that stuff.

And this piddling charge justified months and months of solitary confinement? A lot of people would be willing to confess after that.

This is the only thing which sounds even slightly significant—

Butina sent a message to her handler, “We should let them express their gratitude now, we will put pressure on them quietly later.”

That does indeed sound like a conspiracy. But to do what, exactly? “Gratitude” for what? What kind of “pressure”? To what object? Maybe it sounds better in Russian.