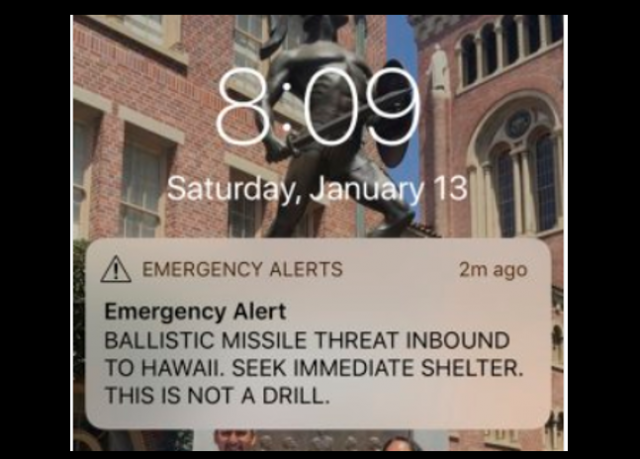 Legal Insurrection readers may recall that in January, a false ballistic missile alert was issued by emergency management staff in Hawaii. The result was wide-spread panic and the firing of the employee responsible for the warning.

Now, a man who suffered a heart attack during the alert has filed a lawsuit against the state.

The false missile alert and the state’s failure to cancel it in a timely manner was a substantial factor in causing James Sean Shields’ heart attack on Jan. 13, the lawsuit said.

His girlfriend Brenda Reichel joined the lawsuit, having suffered “emotional upset” from watching him almost die on several occasions. Their lawsuit names the state of Hawaii and the then-administrator of the Hawaii Emergency Management Agency, Vern Miyagi.

Shields and his girlfriend were looking forward to a quiet day on the beach when they received the text warning.

They both believed the message was true and ‘were extremely frightened’ and thought ‘they were shortly going to die’, according to the lawsuit.

The couple decided that, if they were going to perish, they might as well die together on the beach.

Reichel’s son, who is in the Hawaii Army National Guard, called her saying the threat was real and asked what they planned to do to seek shelter.

The couple then called their loved ones as they drove to the beach. Shields began to feel a ‘severe and painful burning in his chest’ after he called his son and daughter.

It appears Shields has a fairly compelling case.

The complaint cites a statement from Dr. John S. MacGregor, a cardiologist at the University of California’s San Francisco Medical Center, who told the couple that the missile warning was a “substantial contributing factor in causing the heart attack and cardiac arrest.”

MacGregor said that Shields had no known cardiac disease before that time and noted literature with findings about how severe mental stress can trigger heart attacks. He cited a study in the medical journal Lancet that found a sharp rise in heart attacks when Iraq attacked Israel with missiles during the Gulf War, according to the complaint.

If the case is settled in Shields’ favor, the state could be slammed with even more lawsuits.

In the suit, Shields is seeking an unspecified amount of “special and general” damages.

Attorney Randall Rosenberg is not connected with this case, but specializes in personal injury cases. He said if Shields’ lawsuit is successful, it could open the door to more lawsuits.

“There are probably thousands of people out there who suffered either financial or physical injuries as a result of what happened,” Rosenberg said. “I’m aware, for example, of several car accidents that occurred on the day that the missile alert came up because people were rushing around trying to either get home or get to loved ones or get as far away from the downtown area as possible. So there are a number of car accidents. Those, in my opinion, are all attributable to the state.”

The good news for Hawaii? Its Kilauea volcano has stopped erupting.

Now that I think about it, I was very upset to hear this too.
Where does the line start?

Oddly enough, I merely turned to the national defense channel and knew within 30 seconds that a missile was not in the cards. Some people above the city said they just looked at Pearl Harbor. No race out to sea by the subs and the navy siren not going off meant no alarm. Hickam did not scramble. On Kauai, Pacific Missile Range was normal. If there was a real missile, PMRF and Pearl would be the first to know. Go into shutdown and look for a ready Aegis platform. They are the ones that read the satellite and ship-at-sea intel. Pearl would be in charge of the counter attack.

But what about the Kaiju?

Big deal. This is true of most first-time heart attacks.

Reichel’s son, who is in the Hawaii Army National Guard, called her saying the threat was real

So, are they suing him, too?

Odd. Very odd. The Air National Guard on Kauai (stationed at the Pacific Missile Range Facility, I might add) said they had nothing to indicate an attack and no signatures. I believe the National Guard on Oahu is located immediately next to the Civil Defense office at Diamond Head that sent out the false signal and should have known immediately it was a false alarm because in a real emergency they would be informed immediately by Pearl, FEMA, etc. We are talking about 4 top echelon Navy (Pearl), Air Force (Hickam), Army (Scholfield) and Marine (Kaneohe) Bases that are all point-of-the-spear in America’s first line of defense from Pacific attack. And one very top echelon research facility with unparalleled “eyes” in the USA, PMRF. All of which immediately concluded no birds in the air.
No way the National Guard could verify this alarm.

Word just came in: he added the Japanese an additional defendant.

Everybody wants to sue people for “Life”.

If he is going to sue for not getting nuked, think about what he would do if he was nuked.

Never knew of such a thing until we thought we were also losing my sis the day our Dad died.

“The couple decided that, if they were going to perish, they might as well die together on the beach.”

Mr. Shields must have read this book:

Does the state have immunity from these types of lawsuits?

“DEFCON 1 [non-nuke FALSE]
COMMAND?
WHY?
NECESSARY?
NO SUCH AGENCY.
Where did POTUS stop [post] ASIA?
IT WAS NECESSARY.
FOR GOD & COUNTRY.
IT WAS NECESSARY.
NO OTHER VEHICLE TO REGAIN ENTRY.
:[AGAIN] direct pre-knowledge.
:[AGAIN] warning ALERT.
Think BDT.”

Speculation: Hawaii has a secret NSA facility which is supposedly to be the backup of all NSA should the continental US be nuked. Should Hawaii be in imminent danger of a nuclear attack, a Bulk Data Transfer would move the NSA backup to the continent.

A false nuke alert was issued so White hats could gain access to all the data the NSA collected from Hillary and Deep State players.

President Trump has it all.