Sports Illustrated chose Ford to announce Inspiration of the Year Award winner, taking the spotlight away from the winner, a victim of Larry Nassar. 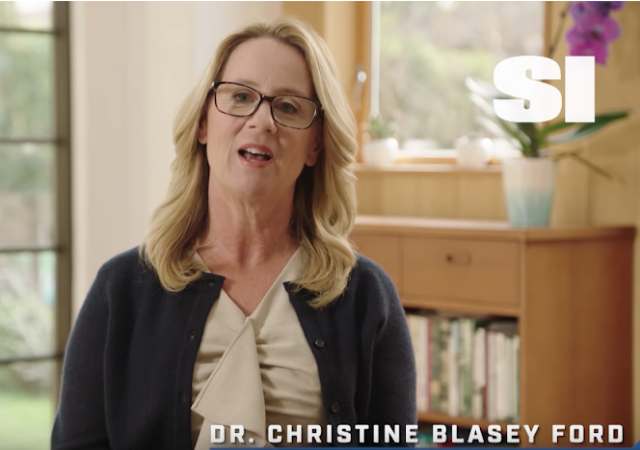 For some reason, Sports Illustrated chose Christine Blasey Ford, the woman who this summer accused Supreme Court nominee (now Justice) Brett Kavanaugh of a sexual assault 40 years ago, to announce the magazine chose former gymnast Rachael Denhollander to receive its Inspiration of the Year award.

WHY?! Now everyone is paying attention to Ford instead of Denhollander and other Nassar victims.

Over 150 females spoke out against Nassar with Denhollander leading the way. All of them spoke about what he did to them, but also how the system failed them.

Rachael Denhollander, I am in awe of you, and I will always be inspired by you. In stepping forward, you took a huge risk and you galvanized future generations to come forward, even when the odds are seemingly stacked against them. The lasting lesson is that we all have the power to create real change, and we cannot allow ourselves to be defined by the acts of others.

Unlike Kavanaugh, Nassar was proven beyond a reasonable doubt of committing these crimes. Witnesses backed up Denhollander’s accounts while those Ford named couldn’t even remember the party she spoke about or flat out denied they attended a party with her.

Why not ask one of the other Nassar victims to announce the award? Or maybe another athlete that suffered sexual abuse? Ford has absolutely nothing to do with sports.

Because of this, Sports Illustrated has taken away the attention and honor Denhollander and the other victims rightfully deserve. Look at the tweet the magazine sent out. It props up Ford more than Denhollander.

Look at the headlines:

The story should be about Denhollander and Nassar’s other victims.

Because politics worked so well for ESPN …

Sports Illustrated has great respect for women, as evidenced by the swimsuit issue.

notamemberofanyorganizedpolicital in reply to Escaped from RI. | December 13, 2018 at 4:22 pm

Hillary Clinton is gonna sue them for ignoring her for their cover.

murkyv in reply to notamemberofanyorganizedpolicital. | December 13, 2018 at 7:39 pm

ROTONDARON in reply to notamemberofanyorganizedpolicital. | December 14, 2018 at 7:29 am

What “is” Hillary…..Poster girl for just how corrupt a female Democrat/Progressive/black widow Spider, can be? Just how low & debased, a Female Librocrat can possibly be? { She wins the spot, for all time…..right next to “Slick Perverted Willie”, poster boy for ‘Best” Masogenist ex-President, & “Liar in chief”…..right next to bath House Barry, “Muslim in chief, & White Hater extroadinere, with a Legacy of Corruption, Lies, & deceit…….Yes Folks…..America, has a “Rogues gallery”, of “ex-Libtard Presidents”, comparable to none!

Huh? Is ex-“teen party girl” now a sport? Or can just anybody play, even though the rag has “Sports” in its name?

Are you kidding? Rumor has it she has tremendous ball-handling skills.

notamemberofanyorganizedpolicital in reply to tom_swift. | December 13, 2018 at 4:23 pm

“Sport” in their title nowadays only refers to “Easy Lay.”

Now we get to hear the big girl voice…. but which personality is doing the talking this time?

I didn’t know making up lies and talking like a little girl was a sport.

This shows what an act she was putting on and how well she was coached by her legal team. All of that was a fraud on all of America. She needs to be prosecuted.

Or at least persecuted

Men like their sports and the idyllic, scantily clad women, its built into their dna. SI has built a vast empire on those themes, stray from it and die a slow death. Apparently, that’s what they’ve chosen. Plenty of mags for the girls and the metro males. Notice how sports mags, gun mags, and “I only read it for the articles” mags are all under assault in one way or another? War on manliness…

It took them 15-20 years, but they finally managed to force the Boy Scout of America into it’s death rattle

People have to understand what has happened in American industry. Where large American companies used to be run by conservatives, who were interested in the company’s bottom line, most large companies, particularly outside the manufacturing segment, are run by liberal/Progressives and are more concerned with impressing their friends on the liberal cocktail party circuit, than their are in putting out a quality product. It has become chic to call yourself a SJW.

In the past, the leadership of a company was almost totally dependent upon the success of that company for their wealth. Now, these leaders have diversified their income streams, have gotten huge golden parachutes and view themselves as baseball managers, who are hired to be fired. Their current position is nothing more than a well paying stepping stone in their chosen careers.

All for the State. Nothing else.

There is no downside for them when they destroy great institutions. They destroy churches, synagogues, Boy Scouts, Girl Scouts, public education, magazines, sport, etc.

How is it a loss for them to destroy our football or baseball? It is an institution we all love and share. So they go in and get the players to kneel, then we don’t watch and if falls apart. It’s a no-lose game when the goal is destruction of anything and everything that binds us together.

Follow the money. Sports Illustrated may have taken payment for this stunt.

During the 2016 election season, I mysteriously got a subscription to The Rolling Stone magazine. Each issue had 3 political articles mostly excoriating all things Trump. The “subscription” stopped after the election was over.

If I were a reporter, I might notice how otherwise-non-political elements of our society might be being deliberately converted to use as propaganda outlets, and I might wonder if this is exactly as spontaneous as ACORN and the Coffee Party.

One has to wonder how close they are to crossing the line where articles have to be marked as advertisements.

During the 90’s I was convinced that the animal rights people were paying the DJ’s on WHFS in DC to constantly spout their rhetoric over the air.

To liberals, everything – EVERYTHING – MUST serve the Cause (Whatever that happens to be today)

This is all you need to know to understand these things. Maybe they got paid for that mysterious subscription. Maybe they wrote off the cost as “marketing.”

To them, that’s a mere detail. All they cared about was that they used the available tools to serve.

It’s the year of the warlock hunter.

At least they avoided having her in the swimsuit(less) edition.

They did do us a favor in letting the real voice be heard. A little late and much forgotten by the news media.

What happened to the quavering 15 year old?

Now she doesn’t want to sound like a damaged teenager. I hope she tries to go even more public because it will become even more obvious the Kavanaugh hearings were staged.

For being so highly educated she sure is ignorant.

She is not highly educated. She traded dollars for paper, nothing more.

Frank Zappa has a song that speaks to the matter of a crew slut… probably just a coincidence.

The last thing she should be a spokesperson for is a glasses cleaning product. She was in the public spotlight for weeks and couldn’t manage to clean her glasses off. What a train wreck.

Who was it said that CBF was gitting nothing out of coming out with her accusations against Kavanuagh? Next expect her to be named People Magazines person of the year.

Still, I would go nuts having to sit through one of her lectures! Should at least be an automatic “B” to take her courses.

I don’t believe that she could sell 100 copies of Hustler if Larry would even give her a chance.

SI is more obsolete than ESPN, if that’s possible.

What happened to the Mr. Magoo glasses?

They went with the baby talk. This scummy woman has been exposed.

What a scammer – on par with Comey or Michael Cohen or hillary clinton.

The way SI readership is going, Mrs. Magoo will be their new centerfold. Ugh.

Excellent point! Where did the rising inflection of every statement go?