The attacker, a student, “took out a steak knife and plunged it into the Irishman’s throat, and then into his chest.” 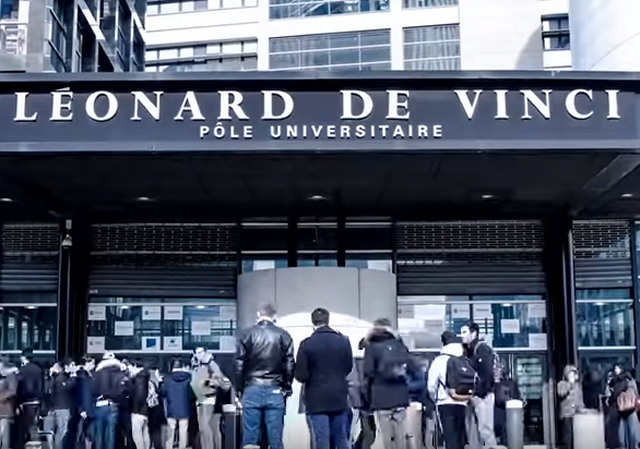 A 66 year-old Irish lecturer was stabbed to death in Paris this week, outside the Leonardo de Vinci private university by a Pakistani student who believed he had insulted Mohammed. The suspect was arrested at the scene.

Academic Stabbed to Death for ‘Insulting Mohammed’ During Lecture

An Irish lecturer was stabbed to death by a student outside the Paris university where he taught on Wednesday for allegedly insulting the prophet Mohammed by displaying a drawing of him during class.

John Dowling, 66, was speaking with a student, identified by authorities only as Ali R., following a lecture when the 37-year old student fatally stabbed him 13 times in the throat and chest.

The suspect, who is set to be indicted for murder on Friday, told the authorities that, while he killed Dowling to defend his faith against a perceived slight, he has also long maintained a personal grudge against the lecturer, the Daily Mail reported Friday.

Peter Allen of the Daily Mail has more on what may have motivated the attack:

Irish lecturer stabbed to death in Paris had ‘insulted the Prophet Mohammed’, says his Pakistani killer

Ali R., a 37-year-old Pakistani national, has confessed to the killing and told police he held a personal grudge against the teacher after failing his exams last year.

Ali – whose surname has not been disclosed by the French authorities – is due to be indicted for murder in Paris today for the attack outside the Leonardo de Vinci private university in La Defense business district.

‘He came to France two years ago to join the management school, but did not pass his first year,’ she said.

‘Since then he had been returning to the college, and had become unwanted to the point that he was not allowed in any more.’

CCTV footage shows Mr Dowling chatting calmly with Ali at around midday, before the attacker took out a steak knife and plunged it into the Irishman’s throat, and then into his chest.

Some people are disputing the student’s version of the events:

Ali has told police that the teacher had made fun of his Muslim religion during English classes at the university.

‘He produced a drawing, which he showed off in class, insulting the Prophet Mohammed,’ Ali said, according to Ms Denis.

Despite this claim, Ms Denis said ‘nobody remembers such an incident. ‘We don’t have proof of radicalization, but rather a feeling that we’re dealing with someone who is very religious, very pious, very practicing.’

Lara Marlowe of the Irish Times reports that the victim was a kind man who was admired by many:

Students from the university who witnessed the killing were taken immediately to a “psychological cell” where Mr Dowling’s fellow professors were also treated for shock. All classes were cancelled for the day.

“Our hearts are broken,” a 28-year-old Ghanian student told Le Parisien. “He was a passionate professor who always made you want to learn more. I cannot understand that anyone could attack him.”

“He was a profoundly kind person. No one understands why he was attacked, though some people are talking about revenge,” a former student told Paris Match.

Another student said she was “deeply shocked and terrified … You could never imagine this could happen in our school, to one of our teachers.”

Here’s a photo of Mr. Dowling:

And here’s a brief video report from RTE News in Ireland:

Tributes for Irish teacher John Dowling who was stabbed in Paris | https://t.co/g9RveHtrD5 pic.twitter.com/u6wLB1Fb08

There are days I truly despise this stupid religion. And yet we keep letting these people into the west.

More like this ideology that needs to be despised.

The problem is, *can* you separate the ideology from the religion?

I would only protest that Islam is not a religion in the Western sense, but rather a socio-political system of government and control of the people with a religious mantle draped over it.

The attacker needs to be introduced to the guillotine, prior to tripping it, a mini version should remove his reproductive parts.

The proper response should be “you kill one of us, we’re going to kill ten of you”. This is war, folks.

The proper response is to deport every damn one of them. And if they try to avoid deportation, shoot to kill.

Enough of the savages infecting our world.

We need to start a a million to one kill ratio.

Not surprised it happened in Paris.

Why does the left worship these savages? They would do all in their power to have a nativity scene removed from a public park but turn their collective heads during known female genital mutilation!
WHY?

The “enemy” of the Left is conservatism. The “enemy” of Islam is the non-believer. The Left sees enough common ground to ally with Islam. The Left’s blindness to the outcome of reality is always their downfall…. and when they are in power…all of us. This death is just a small inconvenience for the Left’s march to utopia….this death is just a small milestone in the march to Eurabia.

Inspector, this is too plain for such a question. The left and the savages are allies in destroying the West. When the West as we know it can no longer protect the left, they will be at the mercy of the savages they allied with….

A recent poll showed that 68% of all Democrats polled supported the creation of prayer spaces for Muslims in schools and universities. Only 45% supported any kind of prayer space for Christians. Makes you wonder about their value system (among a great many other things).

I strongly suspect they believe that their “superior intellect” will lead to their being “in charge”. They can’t seem to bring themselves to even give a moment’s thought to the “unthinkable”, that the savages will eliminate them too.

The left backs Muslims out of total insanity.

Just because something like this happens, don’t accuse all Muslims of being violent. You might get hurt.

Yeah, only about 25% will kill you, and 65% will morally support the killer by thinking he did the right thing. 10% will think it is wrong. And they will all agree that Muslims are oppressed.

The French Courts will free the student because of “cultural issues”.

Just toss this issue onto the many for those rioters in Paris.

1) Apparently he was not a student, having flunked out, and was trespassed from the facility:

‘He came to France two years ago to join the management school, but did not pass his first year,’ she said.

‘Since then he had been returning to the college, and had become unwanted to the point that he was not allowed in any more.’

2)They very carefully do not give the full name of the murderer, because that might be insulting to Islam I assume, and it makes it easier to quietly release him.

3) There is no proof that any picture of Muhammed was shown in class, and indeed the other students remember otherwise:

Ali has told police that the teacher had made fun of his Muslim religion during English classes at the university.

‘He produced a drawing, which he showed off in class, insulting the Prophet Mohammed,’ Ali said, according to Ms Denis.

Despite this claim, Ms Denis said ‘nobody remembers such an incident.

4) He is charged with murder now, but French law is . . . flexible, being based on the Code Napoleon and in service to the State above all. I expect time served and a lifetime welfare entitlement. They may enlist him to organize Muslim units of the riot police to do battle with the “Gilet Jaunes”.

“‘He produced a drawing, which he showed off in class, insulting the Prophet Mohammed,’ Ali said, according to Ms Denis.”

How can anyone insult a man whose only contribution to the world was itself an insult to the intelligence of all thinking people? Absurd!

These cultists should not be let out of their shit hole countries. Islam is a disease.

Within islamic art and writing there are numerous portraits of Mohammed. Islam is a cult which follows in the ways of Mohammed. One of Mohammed’s ways was ordering the assassination of people who he felt animosity towards. Islam is basically the mafia codified as a religion, and may have been the inspiration for the Italian mafia. Of course, McCrone and the cheese eaters will mewl and mumble and dodge and weave, and refuse to confront reality.

There are no halal portraits of Muhammad, since Islam forbids art that depicts the human face and body. Islam forbids a lot of things that might distract you from being focused on Islam every minute of every day, like playing music with instruments, but I digress. That is what this guy mean by “insulting” Muhammad: the portrait itself is an insult since it violates Sharia.

The enemy of the left is the society they live in. They do not fear their own house collapsing, they either have an exit plan, or believe they will be rule over whatever replaces it. There is a great deal of wealth and room for room and in the nation, you can sync 90% of it and live very nicely standing atop what remains. Nobody in the politburo starved during the whole lot more, nor were they short of Caviar.

Beagle Ear I agree with all you wrote, except they weren’t short of caviar.

Perhaps not caviar, but Boris Yeltsin became disenamored of “communism” when he was in Dallas, Texas to visit a NASA facility, and decided to make a simple stop at a grocery store, and discovered food variety available for a reasonable charge to any American that walked in with an attainable amount of cash – food not even the upper echelons of the Politburo could obtain.

Also, noticed that Rocket Man’s staff uses small pads and pens? He doesn’t have access to things we Americans take for granted every single day.

I wouldn’t want to be emperor of such a stultified country.

Use an ad blocker, but send LI a reasonable donation to cover operating expenses. I believe that is a reasonable approach.

“We don’t have proof of radicalization, but rather a feeling that we’re dealing with someone who is very religious, very pious, very practicing”

Are these people morons? When you’re talking about Islam “very pious” is the very definition of “radicalized”.

“Are these people morons?”

A consequence of 1400 years of rabid inbreeding. Mentally unstable and low IQ.

Oh come on, everybody -give Ali a break.

If it was you, as a 37-year-old from another culture, attended a lecture in Paris by an Irish professor for the very first time, would you know not to stab the Irish professor to death after the lecture?

But the, as we read, Ali did have a complaint about his grades. Perhaps he read moooochelle obama’s book before he attended the lecture.

Best quote in the article: ‘We don’t have proof of radicalization.’

Europe is doomed to civil war. We are coming mighty close.

If your religion demands death for insulting a prophet, you don’t have a religion.

Another unemployed layabout Muslim immigrant from Pakistan, a 37-year old former “student” stabs the teacher who failed him to death in broad daylight. He then tries to justify his actions with a claim that the victim had insulted Mo in class, although nobody else remembers it.

Well Mr. Ali R. could join the caravan south of our border and be welcomed into our country by Nancy Piglosi, Miss Cortez and of course Bernard S of the gray hair and Socialist wisdom.