Instapundit: “Twitter… is primarily a tool for getting people angry and letting them focus their anger on a particular target”

Instapundit: “Twitter… is primarily a tool for getting people angry and letting them focus their anger on a particular target”

Professor Glenn Reynolds of Instapundit talks about why he left Twitter. 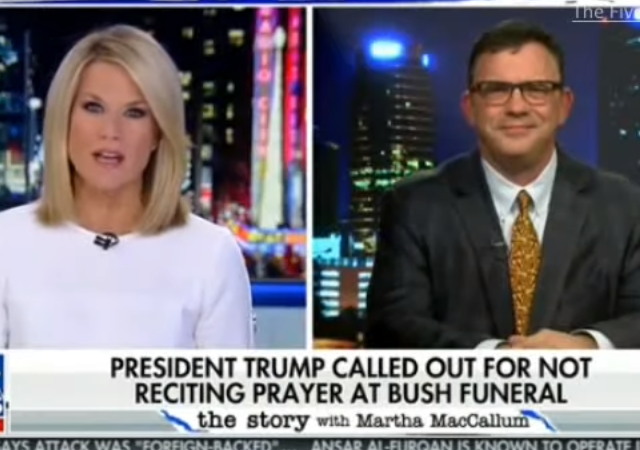 During the funeral for George H.W. Bush, Trump was spotted not reciting the Apostle’s Creed and leftists on Twitter used it as an opportunity to bash him.

Professor Glenn Reynolds of Instapundit appeared on the Martha MacCallum show Thursday night to talk about this and used it as an example of why he left Twitter.

This is your “Christian” evangelical president. pic.twitter.com/u0478FoSyR

The video below is cued to begin at the 36:29 mark, just press play:

Reynolds deleted his popular Twitter account shortly after the suspension of Jesse Kelly. He wrote about the decision in an op-ed for USA Today:

I deactivated my Twitter account about a week ago. I was partly acting on impulse, because the social media site had just, for no obvious reason, “permanently banned” someone I follow, something that seems to be happening more and more. But I was also acting on my growing belief that Twitter is, well, horrible.

All social media have their issues. The “walled garden” character they create is the antithesis of the traditional Internet philosophy of openness. They are actually consciously designed to be addictive to their users — one company that consults on such issues is actually called Dopamine Labs — and they tend to soak up a huge amount of time in largely profitless strivings for likes and shares. They promote bad feelings and bad behavior: I saw a cartoon listing social media by deadly sins, with Facebook promoting envy, Instagram promoting pride, Twitter promoting wrath, Tinder promoting lust and so on. It seemed about right.

But as someone who spends a lot of time on the internet and whose social media experience goes all the way back to the original Orkut and Friendster, I think that Twitter is the worst.

In fact, if you set out to design a platform that would poison America’s discourse and its politics, you’d be hard pressed to come up with something more destructive than Twitter. Twitter has the flaws of the old Usenet newsgroups, but on a much bigger scale.

The ultimate irony is when non-Christian progressives take it upon themselves to point out supposed religious hypocrisy of those on the right.

They don’t care whose club they beat you with.

During the Cultural Revolution, a main form of “discussion” was thru big-character posters (dà-zì-bào). They were wall-mounted posters filled with large-sized Chinese characters typically handwritten using Chinese brush. The authors used these posters to pledge allegiance, praise the leaders, display political views, and attack whoever was the denunciated enemy at the time (usually with a red-ink-cross over the person’s name).

Read the book “Life and Death in Shanghai.”

ya know…. Just cuz a person can read the Apostles Creed and not burst into flame at the heresy does not mean she or he is not a witch. Just a hypocrite. At least Trump does not pretend to be what he isn’t.

And I like the idea of the 7 deadly sins in Social Media. Too bad no one knows or cares about sinning anymore.

That’s what Trump has been doing with it for years. Of course he’s just a buffoon with weird hair so anything he does right must be accidental.

Twatter is a social toxin. I’ve been saying it for years.

It amplifies the very worst in our society, and some fools take that as indicative of our broader body politic.

It isn’t. It is aberration writ large.

They have ~67 million active users in the US as of Q3:

74% of Twitter users say they use the network to get their news:

It’s certainly not a majority of people that are Twits, but the numbers are big enough to be concerning. To me anyway, but maybe I’m just a fool.

Twitter is the tyranny of the mob on steroids, a tool designed for collectivist mind-melding.

You greatly misappreciate what Twitter is. It’s the Big Character Poster of our time – managed by the Silicon Valley Red Guard.

It’s like a window into the souls of millions.

I actually wondered why he didn’t say it myself

I never had a Twitter account and won’t. Same with Facebook. Before I retired, I briefly interviewed with a company. They said I’d have to allow access to both so they could vet me. When I informed them of my lacking such accounts, it was thank you we’ll call.

I reject the Apostle’s Creed. I won’t recite it because to do so is to signify my endorsement of it, which I cannot give.

I don’t have the slightest idea why the President and his wife did not recite it. Shame on people who presume the worse. Should we equate Trump with say, Clinton, who famously was photographed leaving a church service waiving a Bible, and whose wife sneered at people who actually take what it says seriously?

Out of curiosity, what is your objection to the Apostle’s Creed?
Is it the “holy catholic Church?”
In my understanding, the church is composed of all those who have placed their faith in Christ alone for their salvation. Catholic means universal.

Now if you have objections to the Roman confederation of child molestors and kiddy diddlers, I’m right there with you.

“Catholic” in the dictionary, means as you say, universal. In Christian denominations and practice, it means something rather more involved than that, starting with a particular denomination that says
“our way or you ain’t an actual Christian.”

“Catholic” as in the church claiming to be “catholic” as in universal, is asserting that they are, their organization is the one church. Outside their organization you ae not a believer, nor a true Christian. Some folks agreeing with most of the assertions in The Apostol’s Creed, kind of objected to this at the time. Some other folks, since. Some, still.

Can you be a Christian without going to Catholic — the denomination, not the connotation of the word — mass? Communion? Other sacrements? Depends on who you ask.

“The Church” variously means a broad community of limited, common beliefs, or a narrower community of more expansive, common belief (some outlined in the Apostol’s Creed), or one particular organization with it’s associated beliefs, rituals, and the rest. Sometimes it means a single, tight congregation that has a regular meeting place for worship.

Its worse than that.

Denominations have different positions, different doctrine they literally assert as received divine truth. This includes doctrine on how much belief, agreement with particular positions, and practice of rituals leaves you “in” or “out.” Some denominations are happy to think you a Christian if you merely recite the Apostol’s Creed. Some, another, similar creed. Some less than that. Some only if you do their sacrements, the right way at the right time, and they take you in.

/Twits Gonna Twitter
Of course, some twitterati hot-take slimes people they don’t understand and already don’t like using the least generous possible interpretation of all of this stuff they haven’t bothered to try to understand.

Myself, if you can keep up with the pace, I think the optimal strategy for Twitter is not to actually “follow” any of the nonsense hot-takes of the day. Do like IowaHawk and just monitor the stream for opportunities to mock them.

/Manners Among Denominations
FWIW, The Organge Crush was class at that service. Maybe not 3-foot gold “T” on everything class, but class.

It’s conventional-ish for Christians of partial agrement to host each other as guests at significant services like a funeral, for example. The celebrant’s doctrine selects the venue and services.

In those situations as a guest of divergent doctrine, you join in with what you agree with, and remain politely silent for what you do not. As a host, you celebrate and appreciate when these, your guests and coreligionists can join in your ritual. And you politely continue with the parts of your doctrine they cannot join, without making a scene about the difference before or after.

Graciousness has a word root in common with “grace” which like “catholic” also has a particular theological meaning that varies a among denominations.

Divergent Christian sects do manage to practice graciousness together. Some believe that this secular graciousness arises from “Grace.”

/The Class Act
Were I to bet, I’d go with First Lady Melania knowing the doctrinal differences, and good manners in dealing with the situation. Hint: It’s called The *Apostol’s* creed to distinguish it from others. When there’s a qualifier in the name, that usually mean there are other, similar versions out there. If the recited version is not yours, as a guest at a significant service, you participate with what fits.

One thing you do not do is mouth an oath, a pledge and commitment to and before god, unless you mean all of it, precisely. Another aspect of reciting the creed, in church, in a group, is joining a “congregation”, another word that has both a secular meaning, a general Christian meaning, and different, nuanced meanings among doctrines; what the insulting-people call “sects” when they’re not saying “cults.”

I, myself have been to services with elements outside my own, belief. I won’t take communion at a Catholic Mass. That would both misrepresent me, and mislead my hosts. Don’t be a snotty Vegan at a BBQ.

It’s rude to show up to a general purpose mass and decline communion. But, as guest of someone in the congregation, for an event like a Wedding, Christening, or Funeraly, it’s rude not to show up. You honor them by showing up, and respect their beliefs and your own by courteously abstaining from the parts you can’t.

In the event, our current President — the king of gaucherie, we are told — did the gracious and graceful thing. The politicritters in the same row — front, of course — mouthed oaths the do not believe, out of line with their doctrine and practice publicly professed for years. They mouthed the words they do not believe: apparance for political advantage, as if in a grade-school talent show.

The usual suspects in the media, and of course the Twits on Twitter, highlighted their ignorance, bad manners, and vitriol, in their responses. As if we needed a reminder what kind of people they really are.

And they say going to church isn’t good for anything…

Are you talking about the same Bill Klinton who was seen laughing outside a funeral, but suddenly started to cry when he noticed a camera pointed in his direction?

I deleted my Twit account also, when they took free speech away from Alex Jones for NO REASON.

Just my own personal opinion but I think the world would be a better place without Twitter or Facebook.

But they continue on and people on the right, no matter how bad they are treated help keep the lights on.

Never have been able to figure that out.

Both companies would collapse financially if conservatives just walked away and deleted their accounts.