State-funding seeks to lure clerics away from foreign donors 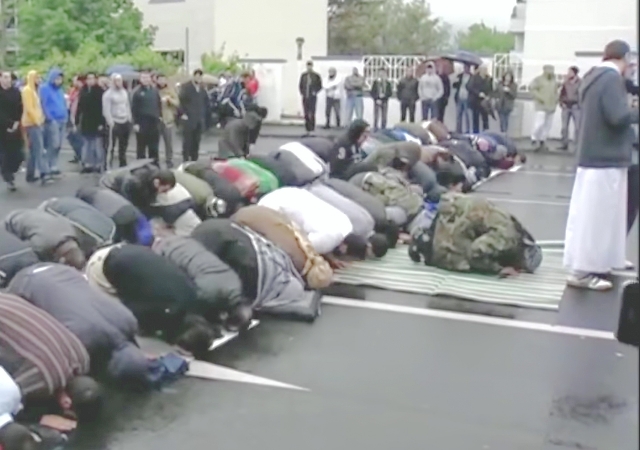 The measure proposed by the lawmakers of Chancellor Angela Merkel’s coalition aims to win the loyalty of Muslim clerics who receive generous funding from Islamic countries such as Turkey, Saudi Arabia, and Iran.

The move will open an additional source of funding for German mosques and Islamic organization without stopping the inflow of foreign money.

Lawmakers from Germany’s grand coalition government said on Wednesday that they were considering introducing a “mosque tax” for German Muslims, similar to the church taxes that German Christians pay.

Thorsten Frei, a member of Chancellor Angela Merkel’s Christian Democrats (CDU) told Die Welt daily that a mosque tax was “an important step” that would allow “Islam in Germany to emancipate itself from foreign states.”

In Germany, church taxes are collected from practicing Catholics and Protestants in order to fund church activities. They are collected by the state and then transferred to religious authorities. (…)

Officials estimates report that there are between 4.4 and 4.7 million Muslims living in Germany, but those figures include people whose families are Muslim by tradition and the number of practicing Muslims could be much lower.

German media outlets welcomed the move. “The plea for a mosque tax is a good step to promote integration of Muslims [in German society],” the newspaper Schwarzwälder Bote declared.

“Mosques in Germany, which do not have money for educational and social work, are easy prey for puppet masters in Riad and Ankara,” Die Landeszeitung wrote. “[Muslim] Communities, which can organize themselves in line with the German church tax, can become immune to the threat of radicalization in the course of time.”

By proposing a mosque tax, the German government hopes to halt the surge of Islamism by throwing money at it. An annual allocation of €100 million to “de-radicalize” German Muslims hasn’t made much impact either, according to the German public broadcaster MRD. State funding won’t change the doctrine of jihad warfare being preached in German mosques nor will it turn jihad-seekers into moderates.

The proposed levy is modeled on the existing church tax under which the state collected around 11.5 billion last year. The state-approved union of protestant churches, the Evangelical Church in Germany (EKD), received around 5.4 billion and the Catholic Church got over 6 billion from the national treasury. Nearly three-fourths of the ecclesiastical expenses are met thorough the church tax, official data show.

This excessive dependence on state funding has impacted the social and political positions taken within these two official churches. Germany’s state-funded Protestant and Catholic churches emerged as the biggest supporters of Chancellor Merkel’s policy of open borders for immigrants.

In July 2018, Cardinal Reinhard Marx, head of the Catholic bishops in Germany, attacked the rising right-wing “populism” in the country, saying: “You cannot be a nationalist and a Catholic.” Thomas Sternberg, president of the Central Committee of German Catholics, recently urged people not to vote for the right-wing Alternative for Germany.

Bishop Heinrich Bedford-Strohm, head of the Evangelical Church in Germany, said that he was “distressed” to see Christians voting for the AfD.

Instead of dampening the AfD’s electoral prospects, the right-wing party continues to surge in the polls while around 200,000 Protestants and 167,000 Catholics officially pulled their church membership last year.

While the establishment in Berlin remains obsessed with the right-wing “populism,” the country is witnessing a rise of Islamic radicalism. Thanks to Chancellor Merkel’s open border policy, the number of Islamists living in the country has now crossed well over 11,000.

Mosque Tax? Does it come with a bulldozer?

That scene is what is referred to as a target rich environment. Something about Satan and Napalm are like hand and glove.

“[Muslim] Communities, which can organize themselves in line with the German church tax, can become immune to the threat of radicalization in the course of time.”

I guess they’re assuming the muslim communities WANT to “become immune to the threat of radicalization in the course of time.”

That seems to be a rather large assumption on their part.

No doubt. They’ll take the prog govt money and continue to take their money from their radical friends back home. Now they’ll have twice as much money to buy twice as many bombs! Prog logic!

In order to tax something for existing, you need a registry of it. Once Germany has a Muslim registry, what happens when the refusal to acknowledge the problems of the average German causes an even more unsavory group to overthrow the New Weimar Republic and get their hands on the premade registry?

The Muslims have declared their plan destroy the West and Europe from within and German/Europe has decided to cooperate. Brilliant!

how to destroy NATO and USA FROM WITHIN – obama/dems will want to emulate…..

Confirmed: Germany is governed by idiots.

“State funding won’t change the doctrine of jihad warfare being preached in German mosques nor will it turn jihad-seekers into moderates.”
__________________

It would have made a lot more sense not to import all the jihadis into Germany in the first place, instead of trying to tax them out of their radicalism once they got there.

But that would have provided the corrupt German politicians fewer opportunities for graft than implementing a big new tax.

It has been working so well wherever it’s applied, too…..

I’m not completely sure of the present day situation in Germany, but when I lived there back in the 50’s, the German government subsidized churches (to repair WWII damages) to the point that most Germans refused to donate in the collection plates.

why would anyone put $$ in collect(ive)ion plate when they already pay to the gov’t plate ?

note the story where the religious leadership supports the
gov’t.

It is hard to imagine how far Germany has fallen since Merkel has ruled. This tax is like a mafia tax. Can you imagine taxing the mafia so that they kept all of their fundraisers domestic? Why would the German people encourage any muslim expansion or offer them an incentive to grow? Can’t they just look at the police crime records to see what they are gaining? Haven’t they noticed that the muslims already there want all of the old cultural events like October Fest to be eliminated? Where are the determined and brave soldiers of old Germany?

No wonder the Christian Church is dying in Germany – it’s accepting government funding.

Um, it’s been doing that for centuries. I was actually surprised to learn that Moslems weren’t already participating in this system.

I guess there’s no word for ‘Danegeld’ in German.

It’s not Danegeld. The money would be coming from Moslem taxpayers.

Any nation will rue the day they assisted in islamizing their own countries.
Suicide.
They have already told you their purpose- over and over again- but the ruling/elite/globalist refuse to listen, and are in fact, aiding and abetting. Read the koran, hadiths, listen to them in their own words. They are there to take over via hijrah, jihad, lawfare, sharia, halal, birthrates….
“the mosques are our barracks” (islamic poem).
Listen!

Further, a “security” tax should be levied against Muslims in European countries, to help offset the astronomical costs of policing and anti-terrorism activities which are necessarily imposed by their presence. Private security costs borne by churches and synagogues, which now must post armed guards outside their doors, should also be included in such a tax, or, levied as a supplemental tax. Such a tax would be largely symbolic in nature, but, a step towards recognition of the pecuniary costs imposed by Islamization.