“There is no rule against Airmen bringing personal items to be signed by the president.” 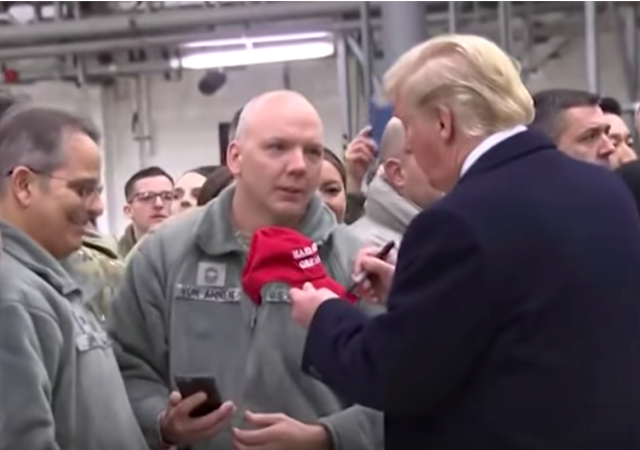 On Thursday, CNN analysts lost their minds because troops in Iraq and Germany asked President Donald Trump to sign MAGA hats. They claimed the troops broke Department of Defense rules.

The Air Force stated that the airmen at Ramstein Air Base in Germany did nothing wrong and broke no rules.

“There is no rule against Airmen bringing personal items to be signed by the president,” USAFE said in a statement.

USAFE said troops held the hats for signing, but did not wear them while in uniform.

A Defense Department directive states that personnel must refrain from engaging in partisan political activities when in uniform and “should avoid the inference that their political activities imply or appear to imply DoD sponsorship, approval, or endorsement of a political candidate, campaign, or cause.”

However, USAFE said it is unaware of any actions during the event that amounted to a violation of regulations.

“Any time the commander in chief offers the opportunity to meet with Airmen, such as this official holiday visit by the President and First Lady, Airmen are welcome to participate. No policy violations have been brought to our attention at this time,” USAFE said.

The US Army has not released a statement about Trump signing the items in Iraq.

The items Trump signed at BOTH bases came from the soldiers. I guess the media cannot believe that there are soldiers who support the president because they also appeared convinced that Trump supplied the soldiers with the merchandise.

We still have about four more days left in 2018. That’s plenty of time for the media and leftists to top this latest freakout.

The Air Force stated that the airmen at Ramstein Air Base in Germany did nothing wrong and broke no rules.

Now these idiots are trying to say he outed a whole seal team………………..

Remember when the mere existence of Seal Team 6 was an unconfirmed legend until Joe Biden outed them so he could join Jugears in spiking the football?

Trump broke a DOD rule? Gee, what a shame! The DOD has no choice at this point; it’s gotta punish the Commander-in-Chief big time. Lefties are pathetic.

I was at an airport USO a few months ago. cnn was playing, I asked the USO volunteers why. They said it is part of the overall airport contract cnn has. cnn pays to be in the airports. I left feedback on the USO website that cnn has to be removed from all USO facilities, since cnn is demoralizing for the troops. If you have time, please write the USO asking them to take cnn off the air in their airport facilities.

Actually having a son that retired as a special forces ranger, he said that is is not Trumps responsibility even if it was a violation. It is the Spec Op’s responsibility to not put themselves in a situation where they can possibly be outed. If there was an issue or concern then they should have known that they were at a place where photos were going to be taken and not to have attended.

what branch are they?

The MSM is just trying to make up for their faux pas in not bitterly complaining when troops asked Obumer to sign that magazine with his picture on the cover.

CNN? Are they still on tv? I gave up on both years ago!

So, will “Retired Rear Admiral John Kirby and CNN Pentagon correspondent Barbara Starr…” be issuing statements that they were/are clueless when reporting on Trump?

No need to apologize. They are clueless by definition since they report for CNN.

Sounds like more “punish anyone for wrongthink” tactics. Force people to keep their personal preferences hidden in order to protect their jobs and then point out that no one holds those positions.

CNN: Trump isn’t visiting troops for Christmas like Obama did every year in Hawaii.
Trump: I just landed in Iraq. Here are the pictures.
CNN: Well, well, you signed hats for the troops. That violates military campaign regulations. You’re both in trouble.
Air Force: Um, actually, you are wrong. It does not violate campaign regulations.
CNN: …well the Orange Man is still bad…

Obummer visited troops in Hawaii because it was painless, free, and had decent PR value, which he really needed. I mean after all, it was equivalent to walking out his front door and meeting them on the lawn; he was already there! And it had the added benefit of being in a secure no-fire zone!!

Well, it DID cut into his Choom Parlor and bathhouse time

Democrat Party’s psychological warfare arm strikes again. Even if was against UCMJ regulations, POTUS can pardon them all.

So, the President has to visit the troops over the holidays, but it only counts if everybody hates doing it?

Seems like the got a bit acclimated during the previous administration.

CNN has already moved on to their next outrage over the trip, NOW it’s outrageous that Trump didn’t meet with the Iraqi pleadershio while he was there, or tell them ahead of time he was coming.

And, if the sainted Obama had been the object of these troops’ adoration and affection, the media would be drooling all over it, as a “feel-good” story.

I’m so sick of this infantile two-faced game, played by these idiots.

Liberals – Trump isn’t going to visit the troop for Christmas!

Liberals – Uh…..It’s against the rules for the troops to ask for autographs!

“… they also appeared convinced that Trump supplied the soldiers with the merchandise.”

Of course they are. Nobody they know ever bought a MAGA hat, so the President must’ve brought them with him.

Does anyone have any pics of Obama signing “Yes We Can” paraphernalia? And if so, did the troops already have it, or did the Obama entourage have to distribute them ahead of Obama’s appearance?

Just as Bush brought the plastic turkey with him, because why would they have one in Iraq? And he woke the soldiers up at some ungodly hour for the photo op, because everyone knows US forces in Iraq keep US Eastern Time. And they had to be ordered to meet him, because why would they want Thanksgiving dinner at such a strange time? And there are still people who believe this cr*p.

Confirmation that CNN needs to be shut down and all senior executives jailed.

When Rear Admiral Kirby went on TV, using his rank to add veneer of respectability to the Democratic Party talking points of the minute, disparaging both the CinC and the troops, he broke UCMJ rules. Whether wearing civvies or a uniform, if you are a flag officer and use your military title, you are “in uniform”.
But hey, he’s a non-combat Public Affairs REMF, and a die-hard Lefty, so…

This will never end.
The only defense is a good offense. With Swamp Sessions gone, there should be one.