To CNN there is no crime worse than the military loving Trump. 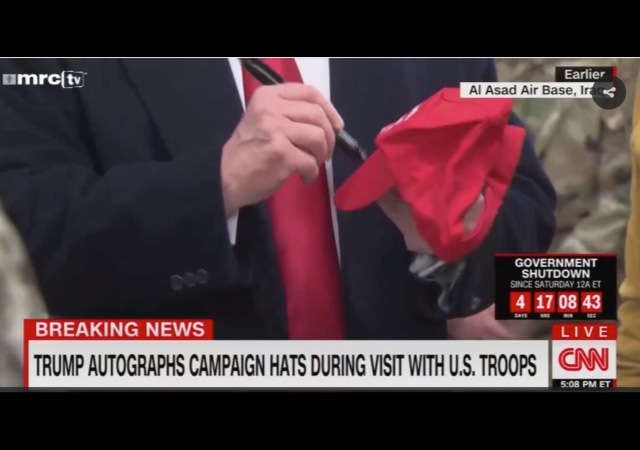 I know the news tends to be slow at the end of the year, but this is ridiculous. CNN reported that troops may have violated Department of Defense guidelines when they asked President Donald Trump to sign their Make America Great Again hats.

Or maybe the troops just wanted to get their commander-in-chief’s autograph and who knows when they’d have another opportunity to get it?

I have no idea why asking for the commander-in-chief’s autograph violates these rules. There is no election going on right now. The president did not bring the hats or the flags. The soldiers had them. The items belonged to the soldiers.

“It is, in fact, a campaign slogan, that is a campaign item, and it’s completely inappropriate for the troops to do this,” Mr. Kirby said. “Not supposed to do this. And I’m sure their boss is seeing that. They’re not going to be happy about it.”

“The pool reporters traveling said that the troops brought the hats with them, including one hat that said ‘Trump 2020,’” said Ms. Starr. “We will have to see if that actually proves to be the case. The question is, if they brought them or if the President brought them: What commander allowed that to really happen?”

Do you remember when President Barack Obama and former First Lady Michelle Obama signed magazine covers of themselves for the troops?

Get a life: @CNN whines about soldiers in Iraq who had their ‘MAGA’ hats signed by Trump during surprise visit https://t.co/qWShG9t7Nm pic.twitter.com/BbCO4rDmip

So we’ve moved from the “Trump hates the troops because he didn’t visit them on Christmas” part of the news cycle to “let’s ruin that one service-member’s career because she was holding a Trump flag,” do I have this right?

You’re
exhausting#CNN.
Seriously,
Get
A
Life!????

This is deep, insightful investigative reporting. Is CNN advocating for prosecuting our soldiers now just because they like their Commander in Chief?

CNN will attack anyone who supports President Trump, including the brave men and women of our military who fight everyday to protect our freedom https://t.co/x6VjuUJFdF

CNN truly is the enemy of the people.

Of all the things going on in our wide world, CNN finds fault with the President signing baseball hats?

What unit commander would think of bringing charges for this? Answer: NONE!

Kirby is a panty waste.

That is an interesting concept, a step beyond the old pantywaist appellation.

Yeah, as opposed to a “Front Admiral”, this perfumed piece of shit wears the back half of a two piece donkey suit.

Man, they just want to suck the life out of us. I heard they were making a big deal about them wearing Washington National hats too. Gosh these people need a life.

It appears CNN does not want America to be great again. Who knew?

Question: Does CNN have a special talent for finding idiots or do they turn people into idiots?

Not supposed to do this. And I’m sure their boss is seeing that.

Meanwhile, their boss’s boss is the one signing the hat.

Exactly my take. Trump is the Commander. Who exactly intends to levy the discipline CNN finds so necessary for the safety of the nation?

. . . active duty personnel may not engage in partisan political activities

Let me guess—they’d just love for “partisan political activities” to include voting.

It does seem counterproductive for D’rats to insist that “make America great again” is a partisan concept. It’s like admitting that one party is pro-American, and the other isn’t.

They won’t give Trump a millimeter, much less an inch.

Meanwhile Gateway Pundit has photos of Obama signing memorabilia as a candidate, but that was ok.

The sainted Obama could do no wrong, as far as the mainstream, Leftist water-carrying media was concerned. The Obama-worshipping media lackeys were too busily engaged in their permanent prostration and veneration, before his sanctified feet.

Maybe Müeller will add this aiding and abetting by Trump to his wish list.

So what are they going to do? Court-martial the soldiers? Convict them and assign prison time? Really? They want to go there?

I’ve heard regulations for officers cited. This may come as a shock to some, but officers have different obligations than enlisted men/ women.

And finally, officially, Trump’s campaign slogan for 2020 is “Keep America Great”. MAGA is not a campaign slogan of a current campaign for President. Certainly not that of Donald Trump. (Others said it and I paid attention, but I thought it bore mention here.)

Ugh, I hear Jim Acosta chaired a panel on CNN about what punishments are to be dispensed. If it’s taking large rocks and breaking them into smaller rocks at a military prison, all I can say is, one, that’s disgusting, two, I hope an outraged nation urges a presidential pardon if it comes to that.

There will be no punishments dispensed, well none that are actually legal. The regulation keeps troops from being in uniform at political rallies and events, this was neither it was a presidential visit. The regulation also doesn’t forbid troops owning political items nor does it keep them from getting them signed.

The only way this could have been against the UCMJ is if one of them was actually wearing the hat for more than a picture and even that would be questionable.

I think they are insane with their hatred of Trump. Troops are risking their lives and these a-holes are worried that they asked the President to sign a hat. Maybe we should have commandant Mueller investigate and carefully question these troops and hopefully catch them with a misstatement and throw them in prison?

Does it interfere with his performance as CiC or the soldiers’ duties? If not, then it’s a First Amendment right exercised by American citizens.

Wonder if CNN is concerned about the appearance of bias and partisanship among the Mueller Russia investigation team?

It is quite possible that CNN thinks that when a service member signs their enlistment application they surrender their constitutional rights. While it is true that regulations restrict political campaigns activity while “in uniform” they do not forbid members from having political opinions or participating in political activities. They are only prohibited from activities that seem an endorsement by the DOD. Of course we mustn’t forget that CNN (and other MSM outlets) didnt want military ballods counted durring the last several election cycles.

Yep and last time I checked a Presidential visit to the troops was a state function by the CiC, not a political event.

If you really want to get sick, check out Jim Acosta. Can we say that Obama visiting as a candidate and signing photos and other memorabilia was trying to influence the election? Maybe Muller should look into that.

Shades of Southpark and Bono episode…

Maybe somebody here could do some research for all of us –

My recollection is that a little while back, Chelsea Manning was criticized for running for public office while he was still technically on active duty collecting health insurance from the military (and still a dude). It’s possible that CNN and Kirby were supporting him against the military regulations he was obviously violating. These Leftist POS’s will throw heroes in jail for getting a hat signed over a deeply disturbed traitor who put those same heroes at risk around the world.

You mean Bradley Manning, a male; there is no female Chelsea Manning. That is simply the delusion of a military coward who deserted his comrades, leaving them exposed to lethal danger.

Like it or not, Chelsea is now that person’s legal name.

Obama had the lowest approval rating from the military in the entire history of polling the military.

And liberals have never forgiven them.

To be fair “liberals” hate the military, every single bit of it.

Thank you CNN for again showing us who you really are——liars. Keep it up….it only helps our side!!!!

Of course the President brought them; together with a plastic turkey. And he woke the soldiers up at some ungodly hour to meet him, because of course they’re keeping DC time out there. (THere are still people who actually believe that stupid fantasy the MSM invented about W Bush.)

Merely owning campaign materials, and having them autographed for ones own personal collection, is not engaging in political activity. Now if they were to wear the hats in public, while otherwise in uniform, that would be campaigning. Or at least it would be in the USA; there aren’t many potential US voters in Iraq who could be the targets of such supposed campaigning.

True story: In the summer of 1988 I was stationed at Ft. Bragg (NC) with the 25th Sig Bn. Several of us were sent to Ft. A.P. Hill (VA) to help set up communications for the National Boy Scout Jamboree. While there VP Bush came to speak to the Scouts. We were told that the VP would like to “swing by” and thank us for the hard work. Myself and another guy ran into town to buy a disposable camera and on the way stopped and picked up a yard sign. I figured I’d get his signature and then mat and frame it with the photo. When my commander for this TDY saw the sign he called me over and asked me what it was for. I told him and he promptly pulled out a knife and cut the sign in half along the top seam making it two signs. He then instructed me to get the old man to sign both and to drop his half off later at his office! I did just that and as I left the office he pointed to a sux pack of Red Stripe and say, “thanks, enjoy the night”!

BTW; I did mat and frame it and it’s now resting on my wall right next to a signed picture of Pres Reagan,and one of Sen Dole and I when he visited my Leigon post!

“This is a really big fckin deal!”