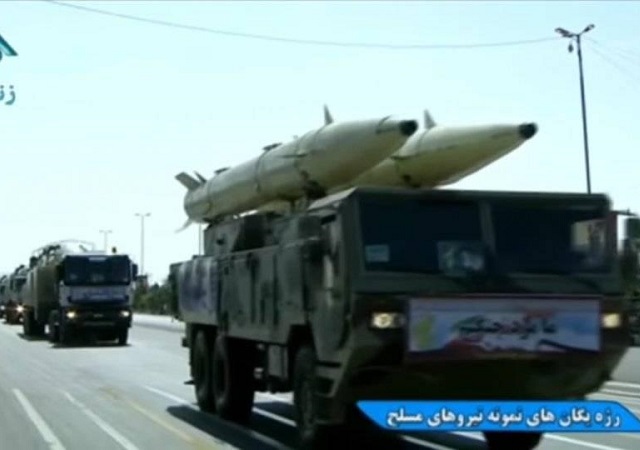 The United States has accused Iran of hiding its chemical weapon-related activities. Tehran was failing to report military facilities designed to manufacture chemical-filled aerial bombs, and maintained stockpiles of toxic munitions, in violation of the 1997 international chemicals weapons convention.

Speaking at a conference organized by the Organization for the Prohibition of Chemical Weapons (OPCW) in The Hague on Thursday, U.S. envoy Kenneth Ward also raised concerns over Iranian regime’s program of developing “central nervous system-acting chemicals” for military use.

After driving out the Islamic State from its territorial strongholds in Iraq and Syria, the Trump administration is determined to prevent Iran from developing nuclear capabilities. Earlier this month, President Trump imposed sweeping new economic sanctions on country’s oil, banking and shipping sectors, ending the Obama-era incentives put in place to dissuade Tehran from pursuing nuclear weapons program.

Iran has not declared all its chemical weapons capabilities to the global chemical weapons agency in The Hague, in violation of an international non-proliferation convention, the U.S. ambassador to the organization said on Thursday.

Ambassador Kenneth Ward told a meeting of the Organization for the Prohibition of Chemical Weapons (OPCW) that Iran had failed to report a production facility for the filling of aerial bombs and maintains a program to obtain banned toxic munitions. (…)

“The United States has had longstanding concerns that Iran maintains a chemical weapons program that it has failed to declare to the OPCW,” Ward said at an OPCW conference.

“The United States is also concerned that Iran is also pursuing central nervous system-acting chemicals for offensive purposes,” he said.

In June 2018, German domestic spy agency BfV accused the Islamic Republic of carrying out industrial espionage inside Germany in an attempt to acquire WMD-related technology. “Iran continued to undertake — as did Pakistan and Syria — efforts to obtain goods and know-how to be used for the development of weapons of mass destruction,” German intelligence report said.

In 2016, Legal Insurrection reported how Iranian regime was targeting German technology and engineering companies to get its hands on dual-use technology. German spy agency BfV recorded 141 attempts by the Iranian agents in the state of North Rhine-Westphalia within a span of twelve months alone. As subsequent German intelligence reports suggest, those efforts have continues unabated.

While any Sharia-guided Islamic regime stocking up on WMDs should be unnerving, the Iranian regime poses an even graver threat. Given its links to Islamic terror organisations: mainly the Lebanese Hezbollah and Gaza-based Hamas, there is a serious threat of proliferation of chemical and biological weapons in the region. With Mullahs already supplying these rogue players with arms and ammunition, the threat of WMD proliferation becomes even greater.

Trump: Iran is not the same country as when I started

Incomplete or fraudulent disclosure is a class of confirmation bias that is representative of the failure of JCPOA and other initiatives.

Perhaps “failure” is too strict a characterization. It is a limitation with an associated risk profile.

why not view it as a designed feature, not a bug?

May John Kerry and Obama get hit with them first.