Former Norwegian green politician spent “half a million dollars flying around the planet.” 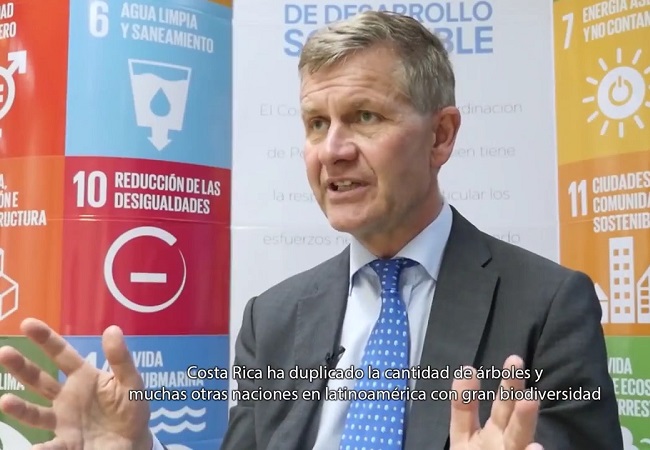 Erik Solheim, the head of the United Nations Environment Program (UNEP), has been forced to resign after an internal audit report questioning his huge travel expense surfaced in the media. Solheim, a green politician and former Norwegian Environment Minister, had spent almost half a million dollars jet-setting around the world.

Solheim stepped down after cerain UN member states threatened to withhold funding over the latest revelations. According to a UK media report: “Countries unhappy with Solheim’s conduct were holding back tens of millions of dollars, threatening a financial crisis at the body.”

“After deep reflection and in close consultation with the [UN] Secretary-General, I am stepping down as Executive Director of UN Environment with effect from 22 November 2018,” Solheim said in a written statement.

Solheim was among the leading critics of President Donald Trump’s environmental policy. When President Trump announced the U.S.’s withdrawal from the Paris climate accord last year, Solheim warned the U.S. that it will “shoot itself in the foot” by quitting the agreement.

UN environment chief Erik Solheim has resigned after a report found he had claimed almost $500,000 in air travel and hotel expenses in 22 months.

The internal UN report revealed that Mr Solheim, a former Norwegian environment minister, had travelled excessively at a time of budget cuts at the world body.

He has been accused of disregard for the environmental impact of aviation carbon emissions, after travelling on 529 of the 668 days covered in the Office of Internal Oversight Services (OIOS) audit leaked to the Guardian in September.

The report said Mr Solheim’s expenses were a “reputation risk” for an organisation dedicated to combating climate change.

Last June, when President Trump pointed out that the U.S. was being made to pay billions of dollar under the Paris accord whereas China and India, major global polluters, were being let off the hook without any financial downsides, the UN environment chief called these allegations “ridiculous” and “absolutely wrong.”

Given Solheim’s track record, his loss will be most felt in China and India. The leading Indian business daily Financial Express called the outgoing UN official “a votary of India and China.” The newspaper described him as a “green politician” who had been “inspired by the life and thoughts of Mahatma Gandhi in the global fight against climate change.”

A stinging rebuke came from the German state broadcaster DW News: “For all his talk about the urgency of tackling environmental problems such as the species extinction crisis, plastic pollution and climate change, the last thing you would expect is that in just 22 months, he spent nearly half a million dollars jet-setting around the globe.”

The latest UN scandal once again shows the hypocrisy of the globalist elite who fail to practice what they preach. While demanding the miners and factory workers in the U.S. to pay for the “climate sin” (an actual term propagated by the environmentalist left), they live a life of excess at pubic cost. These revelations also vindicate Trump administration’s decision to pull out of the unfair Paris accord and put the freed-up resources to better use.

“…the last thing you would expect is that in just 22 months, he spent nearly half a million dollars jet-setting around the globe.”

But, but Carbon Off-Set Credits! Purchased with other peoples money, of course.

Vijeta Uniyal correctly referenced Fen’s Law: ‘The Left doesn’t truly believe in the things they lecture about to the rest of us.’

Thank you. Wasn’t aware of the Fen’s law. But always glad to learn!

Exactly. It’s meant as a warning to look deeper into their motives. Because attacking the points they pretend to care about is like artillery shelling a hill the enemy has never really occupied.

Applied here – ww will never break the Left on the Global Warming issue by arguing the merits of the science. Because the true argument isn’t about saving the planet, its about global socialism redistributing wealth and power via limits on energy production and consumption.

And excellent article Vijeta. I always enjoy reading your work.

Thank you, Fen. Your feedback means a lot to me.

Not debate based upon the illegitimacy of the Left’s argument? That’s called conceding.

The UN has been a kleptocracy since its inception. Its main goal has been to enrich its leadership by gouging money from developed nations. Also, do not fall into the trap that this is being done for the benefit of developing nations. The organization now exists strictly to enrich those within it who have power and influence and their friends.

AND WHY are we still funding this corrupt pile of crap ???

You laugh but they are worth saving.

Seriously though, probably because we can do more to defang the beast from the inside than the outside.

Poland was not liberated by the UN and will not be “saved” by the UN. What nation has the UN “saved”? Poland is quite stable and doing well, partly based upon its opposition to the UN’s mass immigration nonsense.

My questions are:
Where and why were you making so many trips?
Coach or first class?

Sounds like he was based in Naroibi, Kenya and routinely flying to Paris, Oslo, NYC and DC.

Carbon footprints are for the little people.

I bet the Solheim’s of the world never run out of hot water either. And the water pressure of a Day Spa.

I wonder if they have all the REAL duct tape too. Probably pallets of the stuff bogarted away in some elite bunker.

(Sorry, I just wanted a reason to use “bogarted away”)

…As O’Brien passed the telescreen a thought seemed to strike him. He stopped, turned aside and pressed a switch on the wall. There was a sharp snap. The voice had stopped.

Julia uttered a tiny sound, a sort of squeak of surprise. Even in the midst of his panic, Winston was too much taken aback to be able to hold his tongue.