Trump Regrets His Tone During First Two Years as President

Trump Regrets His Tone During First Two Years as President

“I would like to have a much softer tone. I feel to a certain extent I have no choice, but maybe I do.” 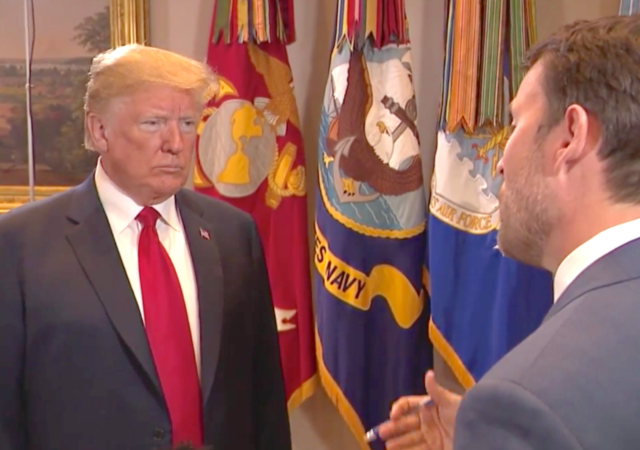 On Monday, President Donald Trump told Scott Thuman of the Sinclair Broadcast Group that out of everything that has happened in his first two years in office, he regrets his tone. From WJLA:

Trump said if there was anything he would try and redo it would be to soften his tone.

“I would like to have a much softer tone. I feel to a certain extent I have no choice, but maybe I do,” Trump said. He attributed his tone during his first two years in office to wanting to get things done on his agenda, adding that he could have been softer in his delivery.

The president also stated that he had doubts about using a softer tone because he might have been “swamped” by his opposition.

He said after the midterm election his tone is something he will be working on and he hopes there will be more harmony between Republicans and Democrats.

Trump told Thuman he “would love to get along” with everyone and that “after the election a lot of things can happen.” But election season isn’t friendly: “But right now they are in their mode, and we are in our mode. And you know if you’re criticized you have to hit back, or you should.”

Thuman asked Trump if he and the GOP are willing to extend an olive branch after the elections:

“I hope so. It is certainly better for the country,” Trump remarked. “I hope that happens and we are certainly willing to do that. And think before anything else we have to get tomorrow over with.”

Trump expanded on his thoughts about the midterms and claimed he has seen “some good number out of the House” and described them as “surprising.”

As we have noted many times, the Democrats have thought for so long a blue wave would crash into DC after the midterms, but for the past few weeks, forecasters have quieted down on that prospects.

Trump defended his decision to send troops to the border to stop the migrant caravan headed through Mexico. He insisted that everyone has “to come into our country legally.”

The economy remains Trump’s priority and can you blame him? Unemployment is at a 49-year low at 3.7%, wages have gone up 3.1%, and the labor force has consistently added jobs every month.

Give and take. Democrats always get cover for their incitements to violence. I think his tone is fine, but this is likely a “give” in preparation for a take.

notamemberofanyorganizedpolicital in reply to healthguyfsu. | November 6, 2018 at 2:18 pm

Well Trump always says you have to help them to “take” the lumps out.

I would much appreciate Trump not changing his tone.

notamemberofanyorganizedpolicital in reply to Halcyon Daze. | November 6, 2018 at 2:20 pm

His tone sure beats the knotted knickers, weak panty waisted RINOS we’ve had for the past many decades!!!!!!!!!!!!

Generally I think his tone is fine, but there have been times when he could have picked his targets better. Punch down too far and he comes across like a bully, which is counterproductive. He has gotten better at that aspect, though.

“Speak softly and carry a big stick; you will go far.”

Assuming law and order has been established, that is a fine statement. Until then, I prefer a little shock and awe.

I would like to have a much softer tone. I feel to a certain extent I have no choice, but maybe I do.

This does not say he regrets anything. He would like to do things a different way.

Harry Truman would have liked to end the war without nuking anybody, but that doesn’t imply that he regretted ending it via overwhelming force.

Obviously, given the nature of his opponents, Trump has no more options than Truman did. Given less hysterical enemies, things could be different. But since they are hysterical and implacable, a relatively severe modus operandi is clearly justified.

notamemberofanyorganizedpolicital in reply to tom_swift. | November 6, 2018 at 2:22 pm

All this admission does is confirm to anyone who inexplicably didn’t suspect or know in the first place that he is not the cartoon the media pretends he is.

You cannot build all those buildings and become president by being nothing but a bombast. The man deserves more credit for being introspective and thoughtful – traits that don’t all of a sudden pop up when you turn 72.

Thanks Colonel; I see the ‘Trump Tone’ as an authentic essential harmonic of this man’s personality. So many recently elected presidents and wannabe’s have an almost patented professionalism tuned by some Ivy League law school.

I find NO problem is understanding what Trump is saying, whereas what he is doing is not always so obvious.

“The man deserves more credit for being introspective and thoughtful …”

Traits of a good decision-maker. The only reason there isn’t more awareness of this by the general populace is the scandalous treatment of him by the Leftists and the media.

The Democrat brain is capable of understanding only one thing. Power. Strength and power will make the Democrat crumble like other threats America has faced. This is a party made of of people who revere Che Guevara.

as a texan, have thought for many years that trump(even before he came to the whitehouse)was a typical new yorker–outspoken, brash, confident, abrupt–lived in manhattan for a while and found him to be typical of that city–nothing necessarily obnoxious, just different–lord, we sent lbj to washington and am pretty sure the rest of the country must have thought texans are complete buffoons–many things about trump are appealing–his determination, his focus, his confidence and, most of all, his intensity–he manages to communicate, through all of his various vectors, that he’s going to do what’s right for our country and you can come along with him or he will drag your ass across the finish line–either way, we’re going to do what’s best for america

Nooooo way. His “tone” is perfect.

If I’m about to go over a cliff, which I think our nation was about to do, then any tone a person wants to use to prevent me from doing so is absolutely fine by me. If after today’s election results indicate that the danger has additionally lessened and the President thinks a softer tone is in order, I’d say go for it, although keep the bis tick handy ’cause it still will be needed from time to time. Of this, I have no doubt.

I love it. If we win the mid terms, I think Trump should go to Defcon Level Bronx++.

How fitting… all of the illegals already here get jobs cleaning up exploded heads, get off welfare, educate their children all of whom end up voting for Republicans. Then more heads explode, more jobs, more education, more Republicans. On and on and on…

I’ve been tracking down DJT’s actual statements since the early primaries, and have posted some of my comments here. I have found DJT’s language generally to be far gentler than that of numerous Democrats at the national level. I could have done without the follow-up to the first debate, but that’s about it.

My research led me to conclude that most of what DJT said that gave offense was actually the media misreporting what he said. I cannot hold that against him.

Listening here in the UK, I think his tone is just right. Any softer and he would have been overwhelmed.
Long may he continue!