Spartacus Booker on 2020: “I will consider running for president”

Spartacus Booker on 2020: “I will consider running for president”

Met with key Obama and Clinton strategists in Iowa 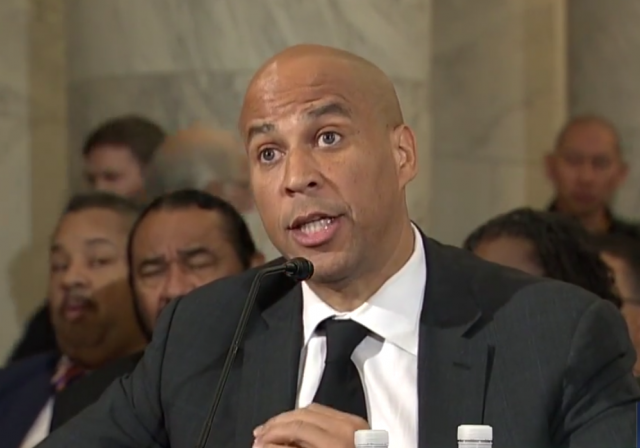 Senator Cory “I am Spartacus” Booker (D-NJ) toured 24 states prior to the midterms, ostensibly campaigning for Democrats.

Having been somewhat cagey about his 2020 plans (and fooling no one), Booker admitted Sunday that he “will consider running for president” in 2020.

He contributed $686,000 to House and Senate candidates across the nation.

And along the way, New Jersey’s dynamic Democrat stopped in all those early presidential primary states, plus a few that look to be big battlegrounds.

Even Booker wouldn’t quarrel with that.

Booker, not always a favorite of progressives, has been winning them over with fiscally and socially irresponsible proposals like “opportunity accounts” by which taxpayers fork over as much as $50,000 to every lower-income child in the nation.

Booker’s not just setting the stage with campaign stops and socialist policy plans, he’s also been consulting with key Obama and Clinton strategists in Iowa.

Sen. Cory Booker, D-N.J., has started consulting with two top Iowa presidential campaign strategists – one who worked with Hillary Clinton and another who worked with former President Barack Obama – as he contemplates a run for the White House in 2020, CNBC has learned.

These early conversations with top-tier consultants in Iowa, where the major parties hold their first contests of the presidential election season, are the latest signs Booker could be preparing to launch a campaign. He has said publicly that he is thinking about running for president.

. . . . It appears that Booker is looking to get a head start on the rest of the potential Democratic 2020 field in the crucial state. He has held discussions with Matt Paul, who led Clinton’s Iowa Caucus operation in 2016, according to three people with direct knowledge of the matter. Paul currently works as senior vice president for consulting firm Cornerstone Government Affairs.

Earlier the month, Morning Consult/Politico published its latest 2020 Democratic Presidential Primary poll results and show Booker as the sixth choice among those polled.

“You want us to lower taxes?”

“Gun ownership is protected in the Constitution? Yeah, right. As preposterous as the rumor we’re supposa be a limited government!”

How I always remember Cory Booker,

I don’t mean to complain…

Ok. I mean to complain about this new LI ‘top articles’ widget. I can ‘X’ it out on my desktop, but not my smart phone.

That’s a lot of screen space consumed by this widget that makes it darn near impossible to read a post or comments.

Any fix for this annoyance coming soon?

Thanks, LB, we’re aware of the issue and looking into it for a fix. 🙂

On yhour smartphone, tap that wjhite bar ntg he upper left. it will expose a “X” for closing.

I find it very telling whose name is not on this very comprehensive, prospective 2020 candidate(D) list.

Note to self. Buy popcorn stock.

Thunderdome 2020 : 25 enter, one man leaves…er…woman… whatever. Knowing how fickle the Left is and how little experience and wisdom count… just optics… they all have a right to think they can win… oh.. and add that son of a mailman to the list.

I hear that T-Bone will vote for him, often. …

The fact that JOE BIDEN is still the front runner by a huge margin should utterly TERRIFY Democrats.

What a treat. The Democrat 2020 field is shaping up to be something out of the Bar Scene from Star Wars. I really think they need to run a gay transgendered multi-racial “dreamer” to round out the field. There is a Judge in San Francisco and another one in Hawaii who will rule that not being a natural born citizen is no impediment to being President. Dreamer is good enough.

It doesn’t matter who they nominate, they’ll start with 40+% of the vote…