It’s obvious now that New Jersey Governor Phil Murphy signed a bill that will allow Spartacus to run for president and senator at the same time.

Booker, a Democrat and New Jersey’s junior senator, is widely expected to run for president in 2020, the same year he’s up for reelection for a second full six-year term in the Senate. In recent weeks, he’s visited Iowa and New Hampshire — which have the first presidential nominating contests in the nation — ostensibly to help out other candidates.

Booker, however, has acknowledged that he’s considering running for president.

Even if Booker doesn’t get his party’s party nomination, the bill would still allow him to run for vice president and Senate at the same time should the Democratic nominee choose Booker as a running mate.

Although the bill does not mention Booker by name, it’s clearly geared toward him. Its sponsors said state law probably permits Booker to run for both offices, anyway, but the new law is meant to ensure that nobody can successfully challenge a dual candidacy in court.

“I think it was clear, but this was just to stop any lawsuits to slow him down,” Senate President Stephen Sweeney (D-Gloucester), a sponsor of the bill, said shortly after the Legislature sent it to Murphy on Monday. “Realize, also, we don’t have a primary [filing deadline] until April. And normally we have a pretty good idea of who the candidate’s going to be by then.”

Booker has already made trips to Iowa and New Hampshire.

I mean, you could tell Booker planned to run for the presidency during the confirmation hearings for Supreme Court Justice Brett Kavanaugh. He provided television with plenty of drama-filled antics, including the infamous Spartacus moment.

Need another hint? It looks like Booker has chosen to mend the ties to the anti-Israel movement. Jewish Insider wrote today that Booker told the publication he supports BDS:

“We’ve seen the alarming rise in anti-Semitism in the United States and across the world in recent years manifest itself in many deeply concerning ways, including in the actions of foreign governments targeting Israel and the Israeli people.”

“I have long and staunchly opposed the BDS movement, and support this bill which will prevent international entities from imposing their will on US businesses with regards to their decisions, consistent with US law, to conduct commerce with our close ally Israel and its citizens. Initial concerns that this bill unintentionally infringed on individuals’ First Amendment rights have now been addressed by changes agreed upon earlier this year, and I feel confident that those modifications safeguard Americans’ constitutional right to free speech. I’ll be adding myself as a cosponsor, and will be urging my colleagues to support this important legislation in its modified form.”

Booker ruffled the feathers of the BDS movement in August after a picture showed him holding an anti-Israel sign. 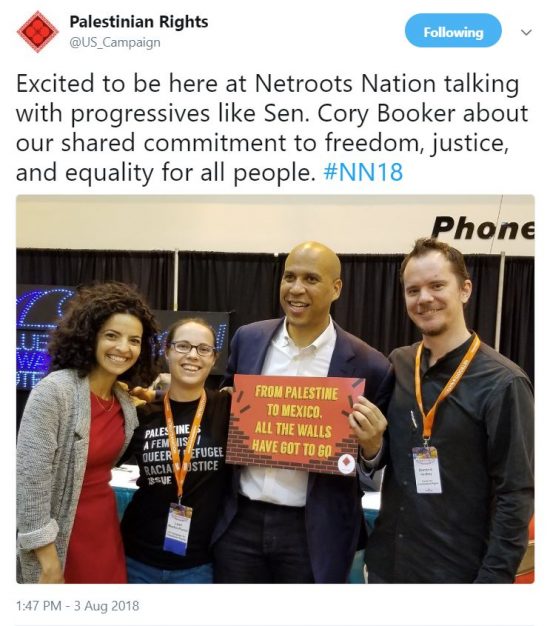 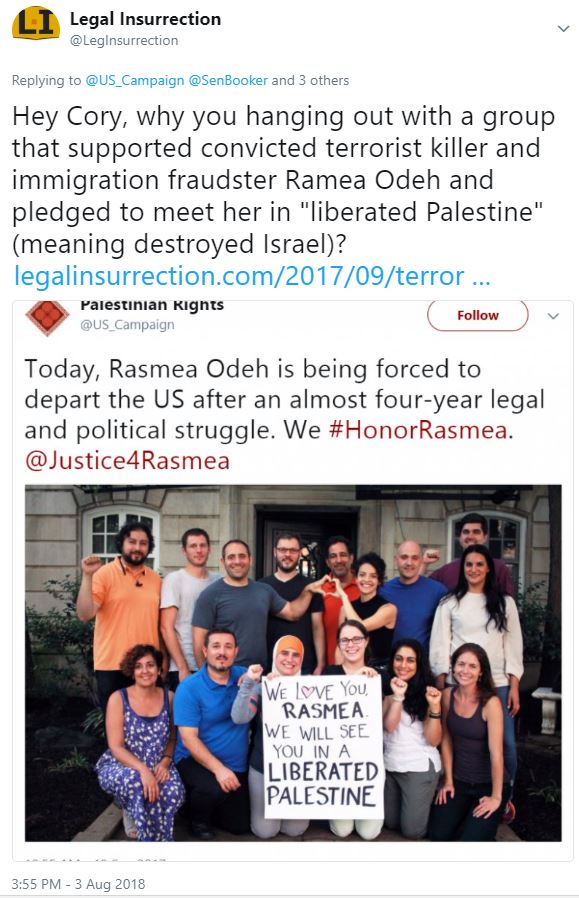 After the backlash, Booker claimed someone tricked him into holding the sign:

“Just before delivering a speech in New Orleans, Senator Booker was approached by dozens of people for photos. In one instance, amid the rush, he was posing for a photo and was passed a sign to hold — he didn’t have time to read the sign, and from his cursory glance he thought it was talking about Mexico and didn’t realize it had anything to do with Israel. He hopes for a day when there will be no need for security barriers in the State of Israel, but while active terrorist organizations threaten the safety of the people living in Israel, security barriers are unfortunate but necessary to protect human lives,” said Booker spokesperson Jeff Giertz.

I cannot count the total number of wanna-be Dem candidates for President… it isn’t a horse race…. either a stampede or onslaught of lemmings. At the least, their CV’s will add “presidential run”.. similar to a participation trophy.

After seeing Spartacus in action at the Kavanaugh hearings, NJ has decided the best thing to do is to allow him to throw himself on his sword in a political loss to Trump in 2020. That way they can get rid of him for good!

I believe the bill also provides that Booker may run on the State ballot as ‘Spartacus’ and a budget was created for his legislative liaison, T-Bone.

Nothing says “commitment” like running for President while also running to keep your “day” job. Maybe he could also run for an open House seat, just in case.

“We’ve seen the alarming rise in anti-Semitism in the United States and across the world in recent years manifest itself in many deeply concerning ways, including in the actions of foreign governments targeting Israel and the Israeli people.”

“I have long and staunchly opposed the BDS movement . . .

How do these statements support BDS?

Am I the only one who doesn’t think his I’m Spartacus! reference made a lick of sense? Booker had the role of liar inquisitor-general, not wronged, oppressed ex-gladiator.

Torquemada would have worked better.

T-Bone acknowledges that you think the Booker host is not that smart and…agrees with you.

He obviously had no idea what it meant.

Wonder if he’ll wear a toga to the first debate?

no, but he will want to dance with you, not your date…

it would be nice if he would lose *both* races…

assuming, of course he even gets the nomination.

he may not be far enough Left for the Demonrats in 2020.

and make no mistake about it, they will run to the Left, especially if next Tuesday doesn’t go well for them.

a Blue Wave failure will be seen as a lack of differentiation from the GOP, not as being too extreme already, and they will double down on moonbatism.

Welcome to the pervasive sordid Leftist politics that the rest of the World has been underwhelmed by in the last 15 years. Little wonder the political Left is so dependent on the MSM, academia and bureaucrats. Expunge the Left from the MSM by restoring the Canons of Journalism and watch the entire house of cards from globalism, Left radicalism to climatism topple.

He will run, but not far. Biden, Hillary, Warren, Sanders and Gillibrand would come in ahead of him. In any case, it’s Hillary’s turn.

The left/Democrats are vicious and petty. The Ds here in Mass. passed a law to make sure Romney could not do that while he was governor, then reversed it when Deval Patrick (D, AA governor) could do that.

No, they didn’t. What you write doesn’t even make any sense, since MA gubernatorial elections are offset 2 years from presidential elections, so law or no law it’s impossible to run for president or VP and MA governor at the same time.

Whether someone can run simultaneously for president and congress depends on state law; some states allow it, some don’t. I don’t know what MA law says on the matter, but whatever it says hasn’t changed in at least the last 20 years, and probably longer. It certainly was not changed twice in the last decade.

Yes, they are separate campaigns. Many states allow this, so there’s nothing odd about NJ doing so, and it’s likely that NJ law already allowed it, but this settles the matter.

Run for Dog Catcher while you are at it…… you just might win !!!

In identity politics, the person is secondary. The important thing is the wrapper he comes in. That establishes his “identity”. Content? Pffffttt.

So Sparky may be just what they’re looking for, no matter how big a loser he is on the inside.

Cory is accused of homosexually molesting a young man.

Isn’t there a lawsuit against him for that?

Milhouse in reply to notamemberofanyorganizedpolicital. | November 4, 2018 at 12:14 am

No, just an allegation so far.

MajorWood in reply to notamemberofanyorganizedpolicital. | November 4, 2018 at 5:07 pm

So he can run for mayor of PDX too.

Would someone help me out with this, I must be missing something here:

“It looks like Booker has chosen to mend the ties to the anti-Israel movement.” (emphasis added)

“I have long and staunchly opposed the BDS movement…”

“Booker ruffled the feathers of the BDS movement in August after a picture showed him holding an anti-Israel sign.”

I’ve been under the misapprehension that the BDS movement was essentially anti-Israel, yet it appears here to be a pro-Israel movement.

“Would someone help me out with this,…”

That sentence is simply a mistake by Ms Chastain.

Booker is sucking up to the Israeli support crowd, figuring it better than the anti-Israeli crowd in getting elected.

Need another hint? It looks like Booker has chosen to mend the ties to the anti-Israel movement. Jewish Insider wrote today that Booker told the publication he supports BDS:

No, it wrote the exact opposite, that he told it he opposes BDS.

Booker ruffled the feathers of the BDS movement in August after a picture showed him holding an anti-Israel sign.

This makes no sense either.

Couple of issues here: First off, one doesn’t run “for president”. We have presidential electors who do the actual voting, and we vote technically for them, so Corey (or anyone else) would just be a name on the ballot. Second, let us remember that Paul Ryan ran for re-election to Congress while he was “running” for vice-president on Mitt Romney’s ticket in 2012, so such is not unprecedented.

What disappoints me about Corey Booker, however, is his total embrace of the far left. I can recall the documentary “Street Fight” about his first race for mayor of Newark against incumbent Sharpe James, who was playing the race card from the bottom of the deck by claiming authenticity. Reminded me perversely of the mirror image of George Wallace once vowing that he would never be “outn—ed” again. But what really impressed me was the interview with Booker’s campaign manager against a backdrop of a huge American flag–a brazen move in the ghetto. But what really impressed me was his defense of Mitt Romney from scurrilous charges back in 2012. Sadly, the Corey Booker of those days no longer exists.