Sexual harassment allegations against Kihuen, and alleged failure to maintain workplace free from discrimination against Meadows. 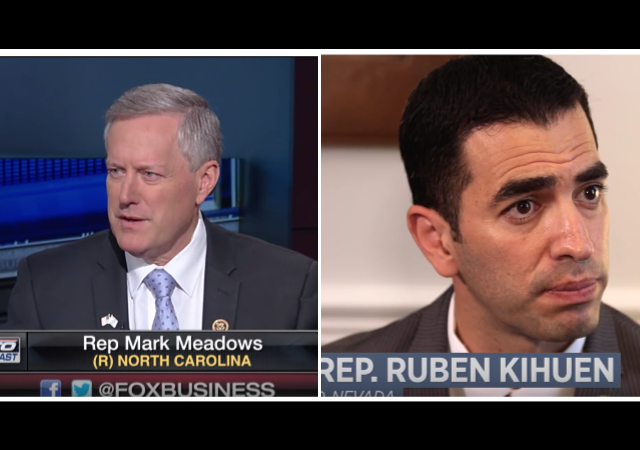 The committee concluded that Kihuen sexually harassed females within his office while it found that Meadows kept his chief of staff even though there were credible harassment allegations against him.

The House Ethics Committee spent the last nine months investigating the allegations against Kihuen. The report stated that “Kihuen made persistent and unwanted advances towards women who were required to interact with him as part of their professional responsibilities.”

What did Kihuen do? Here are some of the examples in the ethics report pic.twitter.com/6qgvT7vJKG

Kihuen did not run for re-election to a second term after allegations surfaced. More detail from the ethics report: pic.twitter.com/TE6bTOyfRF

The release comes after a nine-month inquiry by an investigative subcommittee empaneled in Dec. 2017. The report says that Kihuen’s pursuit of women who either worked directly for or indirectly with him violates House Rules.

House Rule XXIII, clauses 1 and 2, states that “a Member … of the House shall behave at all times in a manner that shall reflect creditably on the House” and “shall adhere to the spirit and the letter of the Rules of the House.”

The Nevada Democrat refused to resign following the allegations of harassment by women in December 2017 even after top Democrats called on him to step down.

But Kihuen decided not to seek re-election, making the announcement a day after the Ethics Committee launched its investigation. At the time, he disputed the allegations against him, but said they “would be a distraction from a fair and thorough discussion of the issues in a re-election campaign.”

The committee found that Meadows “violated House rules ‘by failing to take appropriate steps to ensure that his House office was free from discrimination and any perception of discrimination.'”

Back in 2015, Politico reported that Meadows probably violated these rules when he paid his chief of staff Kenny West after he let him go. One spokeswoman described the payment as “vacation and severance” after he received a paycheck until August 15, 2015, even though he left his post of May 21, 2015.

Severance pay is not allowed in the House and people must only receive a paycheck “only for duties performed within the preceding month.”

Well, a year later in August 2016, another report came out that Meadows’ staff complained of sexual harassment from Kelly months before Meadows let him go. From Politico:

“In October 2014, a group of employees in Representative Meadows’ Washington, DC office reported to the then-Deputy Chief of Staff that they were uncomfortable with Mr. West’s inappropriate behavior towards them,” the OCE referral states.

Meadows learned of the matter soon after, the referral says. According to the OCE, Meadows’ office told West in October 2014 not to come to the office anymore, though it does not appear he was terminated until much later. Multiple witnesses told the OCE that Meadows’ office, however, “took actions to limit or prohibit Kenny West’s presence in the Washington, DC and district offices.”

The issue didn’t end there, though. One witness said West continued to email and call the office, leading her to believe he hadn’t been let go as she first thought. At one point he appeared in the office and was told to go home.

One of three witnesses who spoke to the OCE said Meadows told staffers in January 2015 that he “did not want anyone in the office made to feel uncomfortable and that he would ‘take care of it,'” according to the referral to the ethics panel.

From the report:
– Six female staffers said Meadows’ chief of staff inappropriately touched them, was “handsy”, touching sides, backs, shoulders dozens of times and pulling/ “playing” with ponytails.
– Several said the chief of staff looked down their blouses or up their skirts.

This is absurd. I am just digging in. Turning off, and tuning out.

Let me get this straight.

They are equally censuring a man who PERSONALLY harassed employees, and a man who didn’t fire somebody ‘credibly accused’ fast enough.

This is the reason the Ethics committee is a fucking joke.

failing to take appropriate steps to ensure that his House office was free from discrimination and any perception of discrimination.

The problem is that he didn’t fire some guy with grabby Joe Bidenesque hands quickly enough. “Discrimination” doesn’t have anything to do with it.

And demanding that the boss control “perception” is a standard impossible to meet, since perceptions are subjective and, far too often, wholly imaginary.

In the modern video era, grabby hands should be relatively easy to detect; but perceptions, not so much.

I smell a rat named Ryan behind the Meadows accusations.

Ryan is such a putz

The only way they could censure Kihuen was to find an offsetting Republican victim. Meadows drew the short straw.

Listed in the dictionary under Oxymoron.

“…….any perception of discrimination”? You mean like Kamala Harris saying there is a “perception” that ICE is akin to the KKK?

Since when is Due Process subservient to “Perception”